Was Bibi's battle against Iran really a fight for his own survival?

Prime Minister Benjamin Netanyahu probably understood a while ago that objecting to the Iran deal would lead nowhere, but insisted on waging the battle against it for domestic political considerations. 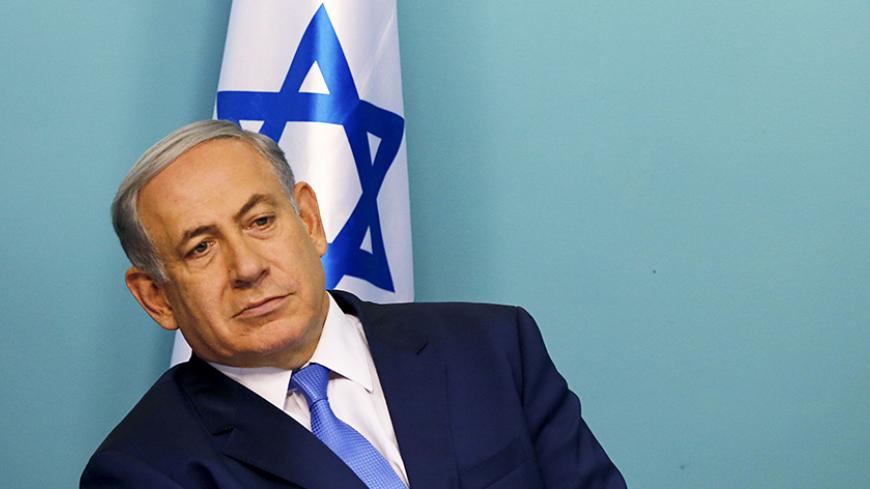 Whoever expected Prime Minister Benjamin Netanyahu to acknowledge his defeat and change his policy was mistaken. President Barack Obama ensured his victory Sept. 2 when he won over enough Democratic senators to support the Iranian nuclear agreement. Then, to everyone’s consternation, the defeated party declared a victory, too. Netanyahu is not prepared to lose, and evidently doesn’t know how to concede defeat graciously. For the first time, we have two winners of the same game.

If Obama won in the real world, then Netanyahu has declared a moral victory. His problem is that aside from himself and his Republican patrons, no one else in the world buys his story. Even the Saudis, who furiously attack the nuclear deal behind closed doors, expressed their official, public support for the deal at the end of last week. But Netanyahu remains adamant. He won, he is the voice of worldwide morality and ultimate righteousness. History will judge between him and Obama.

But until history gets around to it, Netanyahu must now rudely write the story himself. For many long months, Netanyahu was warned in all possible forums and media outlets that his fight in Congress was a lost cause and that his “scorched earth” policy could inflict significant damage on Israel’s strategic interests. It could damage Israel’s bargaining chips vis-a-vis the US administration and the deterrence capabilities of AIPAC and the American Jewish community. Netanyahu scoffed at and belittled those who warned him. He believed that he had a chance of winning and so invented the slogan “It’s a bad agreement, we need a better one.” He put all his chips on the table, raising the stakes instead of retreating into damage-control mode.

For weeks, Netanyahu counted hands in Congress and invested tremendous efforts into wooing Sen. Chuck Schumer, D-N.Y., who was supposed to be his knight in shining armor who would rally scores of additional Democrats. True, Schumer tried to deliver the goods, but almost no one got on the bandwagon. Instead, most of the Democrat votes flowed, as anticipated, into the camp of their president. Netanyahu should have understood this from the start, but whoever once convinced him that Obama would serve only one term in office now convinced him that he could win in Congress. Today, his people admit that they knew that the odds for winning in Congress were slim. If Netanyahu knew that, why did he put up such a fight?

There’s more. In February, I wrote here about internal opposition in AIPAC to Netanyahu’s speech to both houses of Congress set for March 3, two weeks before the March 17 Israeli elections. The article was followed by a wave of angry responses and refutation attempts, but the truth is now emerging above the water line. A report on the Israeli Walla site over the recent weekend quotes AIPAC officials who argue that Netanyahu’s visit to Congress actually sabotaged the chances of achieving a two-thirds majority on the Iran issue, for one simple reason: It turned the debate on Iranian nuclearization from an impartial, factual disagreement to a divisive controversy between the Democrats and Republicans. A foreign leader's attempt to drive a wedge between the Democrats and their president — during an election year, no less — simply drove many Democrats into Obama’s welcoming arms. Thus Netanyahu shot himself in the foot, sabotaging his own chances of winning the fight.

This story raises a burning question: What was the real reason why Netanyahu went to speak to Congress on March 3? According to many commentators, that so-called “historic” speech to both houses is what helped Netanyahu win the elections in Israel, against all odds. All the facts point to an almost self-evident conclusion: that Netanyahu preferred a victory in the Israeli elections over real chances for victory in the American Congress. This was about pure political opportunism. Netanyahu knew that his speech would harm the fight against Iranian nuclearization, but greatly benefit his own re-election efforts. Thus, he chose himself. The bottom line is that the Iranian issue is not really Netanyahu’s number-one concern. Instead, he is simply out for Number One.

What now? Netanyahu continues full speed ahead with Plan B. He wants to ensure a “solid moral majority” in Congress against the nuclear deal. He hopes that Obama’s insistence on signing an agreement that is contested by an absolute majority of American Congress members (including quite a number of Democrats) will harm the chances of Hillary Clinton or any other Democratic candidate to be elected in the next presidential elections.

Indeed, Netanyahu's unrelenting attempts to meddle in the American presidential elections continue. In his intimate circle, Netanyahu laments his bitter fate. Throughout all four of his terms of office as premier, he faced Democratic presidents who developed strong animosities to him: Bill Clinton in 1996 and Obama in 2009. Netanyahu yearns for the day when he is privileged to serve opposite a conservative Republican president. He really was jealous of former Prime Ministers Ariel Sharon and Ehud Olmert, who served opposite George Bush, in spite of the fact that Olmert once told him that he would have been able to get along with Obama. Netanyahu's answer: What is clear is that I would have gotten along excellently with Bush.

In the context of Netanyahu’s pipe dreams, he is counting on a Republican (Donald Trump?) to win the upcoming presidential elections. Then, in February 2017, he expects the Republican president to annul the nuclear deal with Iran based on the “moral majority” in Congress and new intelligence that someone will put on the new president's table. We hope that this time, even Netanyahu knows that these fantasies are utterly baseless.

Meanwhile, Netanyahu faces a problematic domestic front. In interviews last weekend, high-level Israeli opposition members attacked Netanyahu’s “failed US policy” and the damage he has incurred to relations with America. The most outspoken of them all was Yesh Atid leader Yair Lapid, who said, “Even before his speech to Congress, he led an aggressive campaign; damaged our relations with the United States; split the Jewish community in the United States; led us to a situation in which Israel is no longer a bipartisan issue; and perhaps most seriously, damaged Israel’s security deterrence. The Arab world is looking toward Israel today and understands that we are not shoulder-to-shoulder with the US.”

If Netanyahu were to directly respond to this accumulation of accusations, he would certainly say that he actually has been “going shoulder-to-shoulder” with the United States for a long time. As far as he is concerned, that America is the one he was familiar with in the 1960s and 1970s, when he studied in New York, Philadelphia and Boston. It was a more Republican, more conservative, less liberal United States. It is his bad luck that at the moment, the tables have turned.