The Lebanese Shiite group has only a few options for responding to the Israeli strike against it in Syria and wants to be careful not to cause an expansion of the conflict onto Lebanese territory. 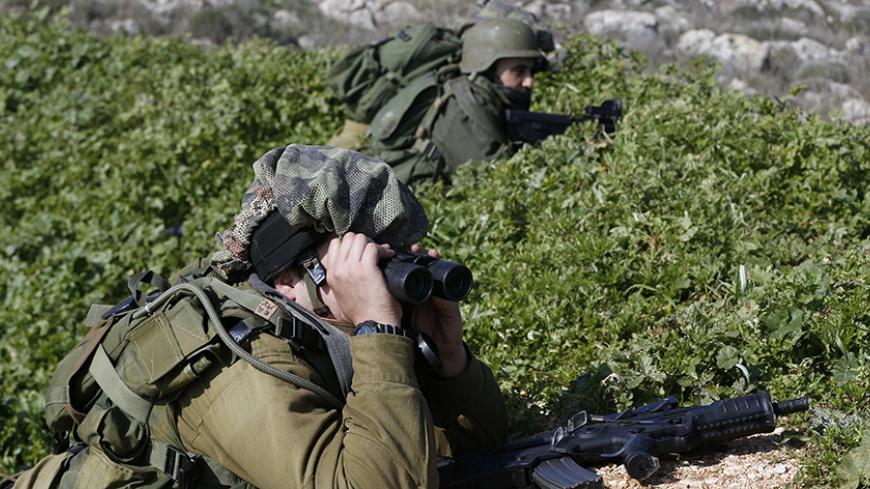 An Israeli soldier looks through binoculars toward the border with Lebanon from above the Israeli town of Metula, Jan. 20, 2015. - REUTERS/Baz Ratner

Changing the rules of the game along Lebanon's southern border was the main challenge Hezbollah faced after the 2006 war with Israel. In the years since, the group has been touting deterrence as the main accomplishment of the war. Tit-for-tat strategies made the equation clear to all concerned, and both Israel and the Shiite Islamist group adhered to the de facto red lines. Since no one had any interest in igniting a new war, the Israeli-Lebanese border became the most stable area in a region prone to explosions. The Jan. 18 Israeli missile strike on the Golan Heights looks like it might alter the equation, although nothing in the immediate aftermath appears to have really changed.

The Israeli attack occurred outside Lebanese borders, but it represents the first major breach of the deterrence Hezbollah had established. The strike was something of a wake-up call to the Shiite organization, perhaps "distracted" by fighting in Syria for the past two years and advising allies in Iraq. The current situation leaves Hezbollah with few options, and all of them will leave a bitter taste.

One option is a strong response commensurate to the level of the Iranian and Lebanese commanders killed in the Israel attack. This, however, could lead to an Israeli reprisal and escalate tensions toward an unwanted, larger confrontation. Another option would be to remain calm for the time being and issue a public statement warning that Hezbollah reserves the right to retaliate at the appropriate time and location. This could be troubling to the popular base if not up to expectations while also sending the incorrect message to Israel that Hezbollah considers the era of mutual deterrence to have come to an end. Yet another, although unlikely, option, would be for Hezbollah to respond in a cold manner, conveying the message to the Israelis that no action they take will go without a response.

All three options are on the table, and Hezbollah is known to be deliberate when it comes to decisions such as the one it faces. Complicating the matter is that any considered response must involve two other parties: Iran, which lost a general from the Islamic Revolutionary Guard Corps (IRGC) in the Israeli strike and is considered the leader of the “resistance bloc,” and Syria, where the attack took place.

On Jan. 20, the IRGC High Commander Mohammed Ali Jafari warned the Israelis that they should expect an “annihilating thunderbolt.” He also said, speaking of Israel, “The IRGC … will continue and deepen our support for the Muslim combatants and fighters in the region until full removal of this very epitome of evil from the geopolitics of the region.” Hours after Jafari’s comments, an Israeli security source said in an interview that Mohammad Allahdadi, the Iranian general killed, had not been the intended target. Rather, Israel believed it was attacking low-ranking guerrillas.

Iran's stance, coupled with Israel trying to walk back its strike and complete silence from Hezbollah, has resulted in an oddly calm holding pattern. An Iranian security source requesting anonymity told Al-Monitor that the resistance bloc was not interested in a war. That said, however, “We won’t accept at any price Israel acting freely, killing, bombing, occupying and oppressing people. This bloc said no before, and today our ‘no’ is going to be heard very clearly,” he said. “Everything has its own time. Let them stay on alert, revise their scenarios and take maximum measures. They know what to do, and our bloc knows well how to draw the real red lines with blood.”

An official source in Beirut suggested that Israel was attempting to change the rules of the game, saying, “Hitting Hezbollah this strong in the Golan means that Israel well understands what it did. The only thing we hope for is that any escalation remains outside Lebanese borders.”

This is the first confrontation between Israel and Hezbollah in Syria. Israel has on several occasions struck targets said to be related to the Lebanese group. These have typically been along the lines of strikes on trucks thought to be carrying missiles and were not always confirmed by Israel. This most recent attack raises the question of what Hezbollah and Iranian commanders were doing in the Quneitra area.

Some allege that the infrastructure for a resistance war against Israel is being laid there. This would mean that Hezbollah, Iran and Syria are eager to diversify their military options in any future standoff with allies of Israel. Hezbollah’s TV station Al-Manar reported Jan. 19 that the “delegation was inspecting Israeli aggressions on the area and cooperation between the Israeli occupation army and the takfiri groups.”

A source close to Hezbollah told Al-Monitor that the first result of the Israeli attack is the expansion of the front with Israel from the Mediterranean to the Golan. “Now that they hit in the Golan, they know well that their northern borders with Hezbollah expands to the Golan. The whole equation is going to change, which also proves that Hezbollah’s decision to fight in Syria was right. Israel is interfering to help its allies, who are being defeated by the Syrian army and Hezbollah,” the source said.

There were a few dust-ups between Israel and Hezbollah in 2014, including Israeli attacks against Hezbollah targets in Lebanon and on the border with Syria. A Feb. 23 attack on Israeli posts, coming after three roadside bombs in two weeks and the launching of rockets at an Israeli outpost on Mt. Hermon, was viewed as a Hezbollah operation, although the group did not claim responsibility. On Oct. 7, Hezbollah fighters "detonated an explosive device on the Shebaa hills against a motorized Israeli patrol, causing a number of injuries among the occupation's soldiers." This attack was in retaliation for the killing of Hezbollah's explosives expert, Hassan Ali Haidar, who was killed Sept. 5 while trying to dismantle four Israeli spying devices on Hezbollah's telecommunications network in Adloun, in south Lebanon.