Game-Changers in Syria Will Lead To Israel-Iran Confrontation

The confrontation between Israel and Iran is escalating over Syria and expanding in Lebanon. 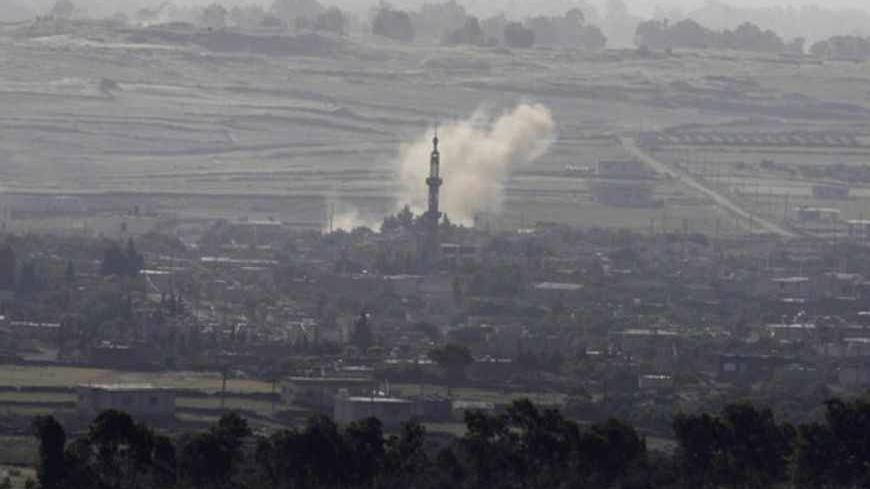 Smoke rises after shells exploded in the Syrian village of Al Rafeed, close to the cease-fire line between Israel and Syria, as seen from the Israeli-occupied Golan Heights, May 7, 2013. - REUTERS/Baz Ratner

The Israeli attacks on Syria produced mild, ambiguous reactions from most Western capitals. The attacks were considered part of the Iran-Israel confrontation in the newly opened strategic playground called Syria, rather than aggression against a sovereign country.

It was aggression, regardless of the nature of relations of these capitals with the Syrian government, the domestic policies of the latter and the internal situation of increasing and expanding rebellion against the regime.

The somehow embarrassed Arab reaction was also a function of the current relations with Syria and of the ongoing escalated confrontation with Iran over Syria. This sets a very dangerous precedent in condoning an attack on a sovereign country, the effect of which will spread beyond the Middle East.

In this newly emerging strategic confrontation, in order to block the possibility of introducing game-changers in a yet evolving situation, messages are flying in both directions.

The Israeli message to Syria was the following: It was not an attack to influence the internal balance of power between the regime and the opposition. Nor was it a war against Syria in the framework of a bilateral state of war that exits between the two countries. Indeed, the situation on the quietest Israeli-Arab borders, in the Golan Heights, has been witness to that since the disengagement agreement of 1974.

From the Israeli perspective, these attacks are considered both pre-emptive and preventive. The aim was to destroy as much as possible of the sophisticated military support base for Hezbollah in Syria, and to indicate that Israel will continue to continue with more of the same actions if more arms come into Syria for that purpose.

The message was also about preventing the entry into Lebanon, the only area of direct military confrontation, conventional weapons that could change or affect the rules of engagement between Hezbollah and Israel in this operational theater.

The Iranian message was very clear, too, in the commander of the naval forces stating the obvious: “The eastern Mediterranean is part of our security borders.”

Later, another message of active diplomatic engagement was sent via the leaked goals of the visit of the Iranian foreign minister to Jordan. These included discussing the dangers of a potential power vacuum in Syria amid the expanding role of the Jordan front as a new launching pad for the Syrian opposition, which has strong Western and regional support.

The same actors are also strongly pushing Jordan to become more involved in terms of its support for the opposition. A visit preceding the foreign minister's visit to Iran's Syrian ally reiterated Iran’s strong commitment to support the Syrian regime. Hezbollah’s leader formally and publicly broke with the official Lebanese policy of self-distancing from the Syrian crisis.

He warned in the clearest possible language that the party is going to help the popular resistance in Syria to liberate the Golan Heights after almost four decades in which the latter formed the dormant and most peaceful front with Israel. This reflects a thinly veiled threat from the Syrian government, expressed by its key ally Hezbollah to change the rules of the game entirely.

The message is to indirectly open the quiet front with Israel and reshuffle the cards in the Arab-Israeli conflict by turning the Golan Heights into an operational and strategic extension of the confrontation in the southern Lebanese theater.

From the Iranian perspective, losing Syria will amount to more than losing its key ally in the region. Such a loss will greatly weaken Iran’s strategic posturing in Lebanon via Hezbollah, both on the borders with Israel and at the heart of the Arab-Israeli conflict.

Adding to this loss is also the end of privileged relations with Hamas because of the Syrian conflict. The area of confrontation by proxy that was Lebanon between Syria and Iran and Syria and Israel is extending east. Syria, a key player and a stability broker, has been transformed after more than two years of conflict into another battleground, a new and important strategic area on the Middle Eastern chessboard.

It remains to be seen if the escalation of tension could lead to another war on the eastern shores of the Mediterranean between Israel and Hezbollah, a war over the changing regional theater or whether restraint based on successful mutual deterrence will prevail. Or perhaps the brinkmanship situation and the fear of the worst for both might act as inducement for a grand Western-Iranian bargain. What we are witnessing is the evolving of a much more complex, explosive and dangerous situation for the whole region, a situation that is open to all these scenarios.