The 2009 election protests in Iran continue to play a large part in politics, and their anniversaries still make headlines every year. 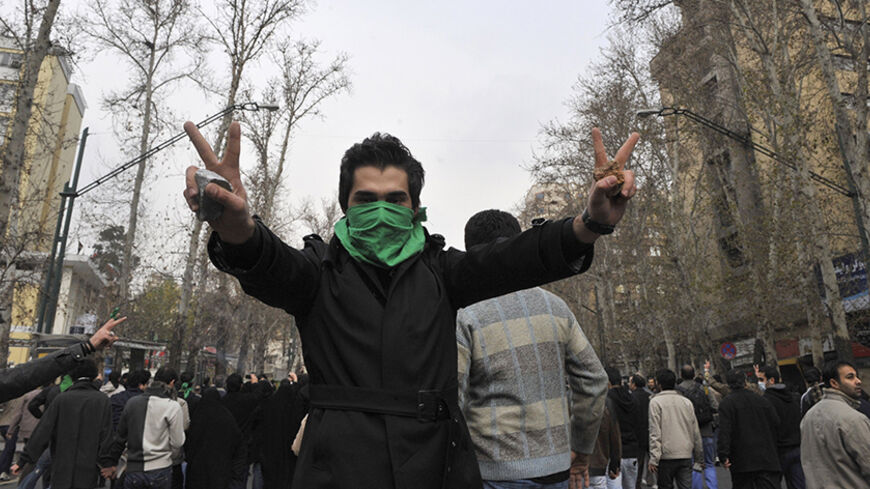 An Iranian protester flashes the victory sign as he holds stones in his hands during clashes after a rally protesting the results of the presidential election in central Tehran, Dec. 27, 2009. - REUTERS
Arash Karami
@@thekarami
December 30, 2014

On Dec. 27, 2009, demonstrators took to the streets to protest the results of the June 2009 presidential elections, which they claimed were rigged in favor of incumbent President Mahmoud Ahmadinejad. It was one of the bloodiest days of the so-called Green Movement protests that shook the Islamic Republic of Iran. Inflaming tensions further, the date fell on Ashoura, a Shiite holy day and a sensitive one for the government.

Three days later on Dec. 30, 9 Dey in the Iranian calendar, pro-government protesters took the streets in a show of force to condemn Green Movement protesters, who they claimed were being supported by foreigners, particularly the United States, Britain and Israel.

The Green Movement protests that day became known as the Ashoura protests and the pro-government protests three days later became known simply as 9 Dey. The anniversary of 9 Dey is now a significant date for the Iranian media. Many officials give interviews about its significance, state television runs specials surrounding the events and social media becomes particularly active.

Many conservative-linked social media pages shared political cartoons showing the Green Movement protesters as agents of foreign governments. Supporters of the Green Movement share pictures of Green Movement leaders and 2009 presidential candidates Mir Hussein Mousavi and Mehdi Karroubi. Some shared pictures of Mahmoud-Reza Khavari, a conservative official who fled the country after fraud charges, participating in the 9 Dey demonstrations. Twitter users also used the hashtag "We will not forget" in Persian, and posted pictures of those who died or were arrested in the protests.

This year, the issue of the house arrests of Karroubi, Mousavi and his wife Zahra Rahnavard has been hotly debated. The Reformist candidates in the 2009 elections have both requested an open trial so they can defend themselves against the accusations that have been leveled at them. They have been under house arrest for nearly four years.

Many conservatives have warned that if they are tried in court, conviction of their crimes carries the death penalty. Morteza Agha-Tehrani, secretary-general of the Endurance Front, a hard-line group that was once closely affiliated with Ahmadinejad, said, “In case of a verdict of execution, they are ready to give a written oath to not tear the country apart, then we won’t object.”

The statement by Agha-Tehrani reveals many of the concerns of the establishment both during the protests and today. The decision by the Green Movement leaders to continue the protests despite warnings by the supreme leader created divisions within the Islamic Republic elite, and it continues to haunt them.

The 2009 protests have also become something of a means of eliminating political rivals. President Hassan Rouhani has been forced to introduce five different science ministers to parliament after his previous picks were accused by conservatives of having close ties to the 2009 protests.