Conservative Parliament member Ali Motahari continues to defy criticism and threats of judiciary action to ask for the release of Green Movement leaders and other political prisoners stemming from the 2009 elections. 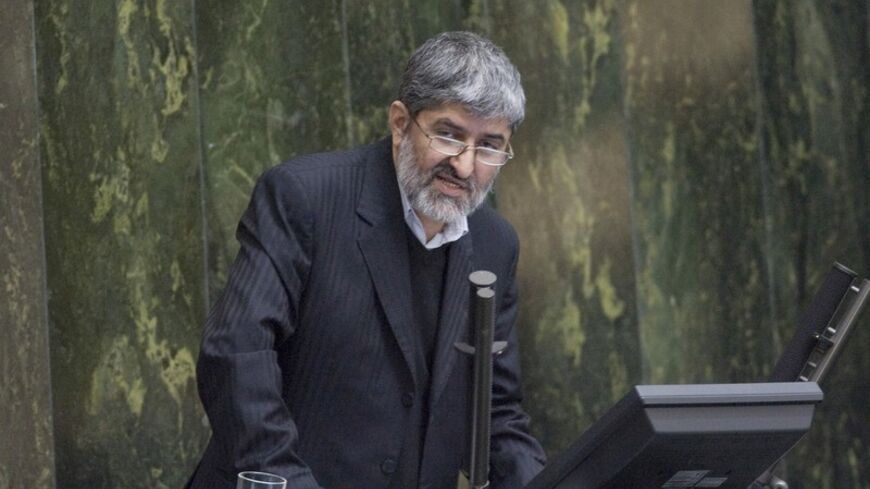 TEHRAN, Iran — Ali Motahari is the only Principlist member of parliament (MP) who repeatedly for the past four years has demanded that the establishment end the illegal house arrests of Green Movement leaders Mir-Hossein Mousavi, Zahra Rahnavard and Mehdi Karroubi. He believes that even if the government wants to convict them, they should first be put on trial in an open and just court so that the charges against them can be specified. Most controversially, he said that former President Mahmoud Ahmadinejad should also be put on trial. “Everyone, including Mr. Ahmadinejad and those organizations that blindly supported him — the Ministry of Interior and the way it announced the results of the election, certain military personnel, the Ministry of Intelligence and so on. … It should be clarified what role they each played if the nation is to regain a clear conscience,” Motahari said.

The fact that Motahari has expressed these views using the platform of a dominantly Principlist parliament on the anniversary of the pro-government demonstrations of 9 Dey has angered many conservatives who continue to call the 2009 protests a “US-Israeli sedition” with the help of a “fifth column” inside Iran. The comments resulted in the prosecutor-general, Gholam-Hossein Mohseni Eje'i, announcing that he is opening a court case against Motahari.

Nonetheless, it appears that Motahari’s particular style of conservatism has made him a popular figure among Reformists and Green Movement supporters on social media. So much so that as soon as tension escalated between Eje'i and Motahari and it was announced a judiciary case was being put together against him, a Facebook page with the title "Campaign of Support for Dr. Ali Motahari" was created. In less than a week, the page had more than 10,000 followers.

A journalist working for the reformist Shargh newspaper who wishes to remain anonymous told Al-Monitor that Motahari’s popularity is due to the fact that he has “been even more straightforward than [former President Mohammad] Khatami when it comes to the issue of political prisoners and the house arrests” stemming from the 2009 elections. “In the absence of a brave Reformist,” the journalist said, “what Motahari says is really noteworthy, especially given the fact that he is a Principlist.”

Criticism of Motahari from hard-liners has been swift, however, an indication that the 2009 arrests continue to be a sensitive issue for them. In addition to the judiciary case, his website has been blocked, the link to his biography in Wikipedia has been filtered and he was openly criticized by the head of Iran’s human rights council, Javad Larijani, brother of parliament speaker Ali Larijani and the head of the judiciary, Ayatollah Sadegh Larijani.

What has allowed Motahari so much room to openly criticize government officials in regard to this topic has puzzled many Iran observers, even inside Iran. The most common theory is that it is the result of the role Motahari’s father played in the founding of the Islamic Republic of Iran in 1979.

Ayatollah Morteza Motahari is often referred to as the "theorist of the Islamic Republic.” He was a prolific author, co-founder of the Combatant Clergy Association, and had a very close relationship with Iran’s first Supreme Leader Ayatollah Ruhollah Khomeini, who called him “a son” after Motahari was assassinated by a radical Islamic group known as Furghan on May 1, 1979.

A member of the Islamic Iran Participation Front (Jebheye Mosharekate), the main Reformist party which is currently banned from political activities, said that Ayatollah Motahari has a unique place in Islamic Republic history, even among hard-liners and that “being the son of Morteza Motahari provides a great deal of immunity. There is much affection for Ayatollah Motahari and the Principlists refer to him as 'the Martyred Teacher.' Ayatollah Khamenei cared very much for Ayatollah Motahari and naturally will not allow Motahari’s son to be put on trial.”

This sentiment was echoed by an adviser to the interior minister during Ahmadinejad’s presidency, Abdolreza Davari, who, quoting Amir Mohebian (a moderate member of the board of editors for the conservative newspaper Resalat), wrote the following on his Facebook page: “A while back, a list of unique and unorthodox positions of Mr. Motahari was presented to the supreme leader. In response, however, he smiled nobly and told those present: 'Don’t be so sensitive about Mr. Motahari’s social and political positions. His positions, like those of his father the Martyred Teacher Morteza Motahari, have many ups and downs.'”

After this event Motahari wrote a column on the website Tabnak saying, “Ahmadinejad is like a child who bothers everyone but is being constantly encouraged.” He added, “I ask those who are determined to compare the events of today with those of early Islamic society: Would you like to be compared to Umar ibn Sad and Ibn Ziyad, who prevented the prophet’s grandson from talking on the day of Ashoura?” This was viewed by many as a reference to a Khamenei speech in which he compared the leaders of the opposition to Talha and Zubair, the two commanders who betrayed Imam Ali, the first Shiite imam. His words angered Ahmadinejad’s supporters in parliament so much that they tried to expel Motahari from the Principlist faction in the legislature. Their attempt was unsuccessful and Motahari later denied that he was addressing the supreme leader with those comments.

Motahari again caused controversy in 2011. When an Islamic Revolutionary Guard Corps (IRGC) commander was nominated for the Oil Ministry, Motahari questioned the entrance of the IRGC into politics and criticized that most civilian projects were under its control. A political analyst told Al-Monitor that these statements “were more significant than even calling for release of Green Movement leaders” and likened it to “playing with fire.”

His controversial statements are probably why his office has been bugged, the analyst explained. “It is not surprising at all. He criticized the government more than some Reformists or supporters of the Green Movement. It is understandable that the intelligence agents had targeted him.”

Motahari’s political positions, however, should not conceal his religious positions. A former parliamentary reporter who has met with Motahari said to Al-Monitor, “His religious views are very traditional. He strongly objects to the idea of gender mixing and supports other conservative religious views such as polygamy.” He added, “On the other hand, he has these moderate political views. I believe that Mr. Motahari is quite a phenomenon in Iranian politics.”

Despite the media storm and the possibility of a court case that many believe will not ultimately take place, Motahari’s statements in support of the releasing of political prisoners may also be unfruitful. A former Reformist political activist told Al-Monitor that the release of the Green Movement leaders is “Ayatollah Khamenei’s decision. If there is anyone who can make him change his mind, it is Hassan Rouhani, but so far he has been unsuccessful. When the president is incapable of doing anything, what can an MP do?”