As Iran is set to hold parliamentary elections, parliament Speaker Ali Larijani seems to be preparing for an increasingly important role. 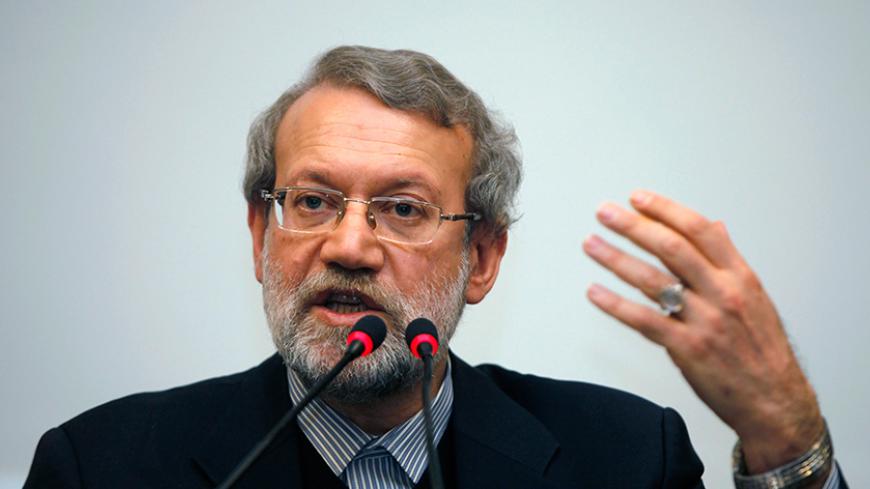 He is the second son of Ayatollah Haj Mirza Hashem Amoli and the son-in-law of Ayatollah Morteza Motahhari, one of the key theoreticians of the 1979 Islamic Revolution whom the Islamic Republic’s late founder Ayatollah Ruhollah Khomeini once described as “the fruit of my life” and “a part of my flesh.” Larijani’s siblings have also played distinguished roles on Iran’s political stage. Sadegh Amoli Larijani, a younger brother of Ali, is the head of Iran’s judiciary — a position that is directly appointed by Supreme Leader Ayatollah Ali Khamenei. Meanwhile, Mohammad Javad Larijani, an older brother, heads the judiciary’s human rights council and serves as one of Khamenei’s top advisers.

In 2005, Ali Larijani ran as a conservative in the presidential elections that first brought Mahmoud Ahmadinejad to power, coming in sixth among the seven candidates. Following Ahmadinejad’s victory, Larijani was put in charge of Iran’s nuclear file in the capacity of secretary of the SNSC, replacing Hassan Rouhani. However, as time passed, a rift between Larijani and Ahmadinejad widened until Larijani resigned from his post at the SNSC and ran in the 2008 parliamentary elections instead. After he secured a seat in parliament, Iranian lawmakers unanimously voted for him to become speaker, heading the legislative branch. Larijani managed to repeat this success in the ninth parliament. Today, as Iran is about to hold its tenth round of parliamentary elections since the 1979 Islamic Revolution on Feb. 26, he continues to serve as speaker.

Since the start of his political career, Larijani has stayed on the right of the political spectrum, among the Principlists. Yet when Ahmadinejad’s Principlist government was in power, he found himself at odds with the heads of the two other branches of government. These differences reached a climax in February 2013, the year of Iran’s most recent presidential elections. Although Larijani did not openly express his support for any of the candidates during the June 2013 presidential polls, he quickly found his way to the presidential office after Rouhani won the vote, and congratulated him on his victory. The special emphasis that Larijani has placed on improving relations between the legislative and executive branches of government is evidence of the different approach he has assumed now, compared to his path under Ahmadinejad. Indeed, Larijani has set out to support Rouhani ever since he took office. In fact, this support has been so strong that many hard-liners in parliament have accused Larijani of being one-sided in favor of Rouhani’s administration. During some delicate situations over the past two years, such as the impeachment of Rouhani’s initial minister of science, research and technology and the introduction of new science and interior ministers. In regard to the pursuit of the nuclear negotiations, Larijani has done his best to act in favor of the administration.

This closeness with Rouhani has infuriated hard-liners, and Larijani — who is known as an anti-American figure in Iran’s political scene — has even been accused of backing the United States. The events surrounding parliament’s ratification of the Joint Comprehensive Plan of Action in July and Larijani’s handling of the matter as speaker severely distressed opponents of the nuclear agreement, prompting them to accuse Larijani of being a dictator.

In such an atmosphere, it was not odd that rumors surfaced about the Principlist speaker moving to side with the Reformists or moderates in the upcoming parliamentary elections. Some, however, are dismissing or downplaying these rumors.

Saeed Laylaz, deputy head of the moderate Executives of Construction Party, told Al-Monitor, “Taking such an implication was incorrect from the start, because before entering parliament, we can’t talk of forming a coalition with Larijani, who is in some way heading parliament’s Principlist movement.“

However, on registration day for candidates for the parliamentary elections, Larijani announced that he was entering the fray as an independent. The move comes while he has been one of the top members of the conservative Followers of the Leader faction, considered the strongest grouping in the current parliament. Now, as the current parliament’s term is nearing its end, this faction, which is made up of moderate Principlist figures, is facing a great deal of opposition, particularly over its support for the Rouhani administration — a position that has made extremists within the faction discontent.

Over his political career, Larijani has become increasingly moderate. Indeed, he may now be one of the closest Principlist politicians to the Rouhani administration. Of note, he was severely criticized by the Reformists during his time as head of Islamic Republic of Iran Broadcasting (1994-2004), yet now enjoys close relations with Rouhani and Reformists alike. Since Rouhani first introduced his ministers, many have accused Larijani of undue influence in the Cabinet or of imposing his own will on the administration.

Now, with parliamentary elections approaching, the Principlists are trying to form an advisory council by inviting prominent politicians such as the supreme leader’s foreign policy adviser Ali Akbar Velayati, Tehran Mayor Mohammad Bagher Ghalibaf and Larijani. As the prospect of the Principlists branching out once again becomes increasingly serious, there are many attempts to forge internal unity. Asadollah Badamchian of the Islamic Coalition Party — one of the oldest conservative political parties in Iran — confirmed the existence of internal differences, saying, “We are working hard to unify the Principlist movement. … The Endurance Front asks why we invited Ali Larijani. … Another front asks, ‘Why did you invite the Endurance Front?’ … We have held a lot of meetings in order to form a three-way coalition with the Endurance Front, the Devotees [of the Islamic Revolution] faction backed by Ghalibaf and Larijani, and hope to gather the Principlist movement in a unified format for the parliamentary elections."

Yet despite these efforts to forge unity, the differences within the Principlist camp still appear serious. Laylaz told Al-Monitor, “The situation is much better in the Reformist front, and there is an unprecedented unity among their entire organization.” Laylaz added that he does not believe it’s impossible to approach Larijani after the elections, saying, “Considering Mr. Larijani’s viewpoints, it is possible that after entering parliament, a kind of cooperation will be formed between him and the Reform movement.”

Whatever the situation, Larijani has reached a veteran politician status in Iran, where he is now talking of an independent presence in elections and no longer needs to be represented by the Coordination Council of Islamic Revolution Forces, which in the 2005 presidential elections were supposed to introduce a single Principlist candidate, with prominent figures Habibollah Asgaroladi, Ali Akbar Nategh-Nuri and Mohammad Reza Bahonar naming Larijani as their sole candidate. However, Ahmadinejad and Ghalibaf failed to adhere to this decision, and so Larijani garnered a mere 1 million votes. Over 10 years later, it is clear that, for Larijani at the very least, the game has drastically changed.