Remarks by Iran's judiciary that the 2009 protests were not trying to overthrow the government have led to a call by an Iranian MP to end the house arrest of Green Movement leaders. 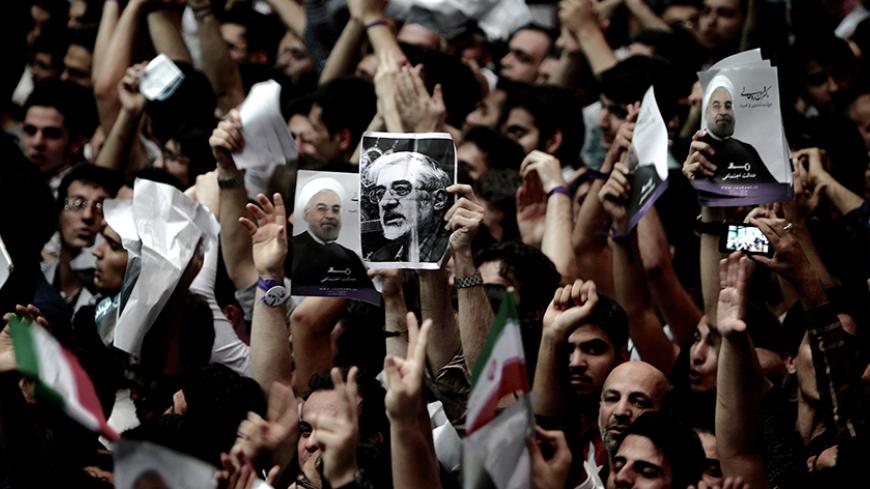 A supporter of former Vice President Mohammad Reza Aref holds a portrait of Iranian opposition leader Mir Hossein Mousavi, who has been under house arrest since February 2011, during a campaign rally for Aref in Tehran, June 10, 2013. - Getty Images/Behrouz Mehri
Arash Karami
@@thekarami
July 1, 2015

The 2009 presidential election continues to divide some of the top leadership in Iran. Mahmoud Ahmadinejad’s re-election, which his opponents claimed was fraudulent, brought about the largest protests in Tehran since the 1979 revolution. The two Reformist presidential candidates, Mir Hossein Mousavi (and his wife, Zahra Rahnavard) and Mehdi Karroubi, remain under house arrest for challenging the results of the elections and calling for demonstrations. Conservatives and hard-liners immediately depicted the organizers of the protests as foreign agents determined to overthrow the Islamic Republic. Hundreds were arrested for politically motivated charges in the aftermath of the elections.

Reformists and many who voted for Mousavi were either forcibly removed from active political life or were too disillusioned with the repressive environment to vote in the following parliamentary elections. While President Hassan Rouhani’s 2013 election brought back some moderate Reformists and increased political participation, the 2009 election is still used by hard-liners in parliament to attack or impeach ministers they perceive to be too lenient on social or cultural issues. A rebirth of the “2009 sedition,” which is what the hard-liners call the 2009 election protests, still serves as a rallying cry by conservatives to push back against Rouhani and his administration.

However, the narrative that those who protested the 2009 elections wanted to overthrow the Islamic Republic took a hit after comments by Ayatollah Sadegh Larijani, the head of the judiciary, the body that played a central role in the repression of the postelection protests. In a June 28 speech in commemoration of the judiciary, Larijani said, “The situation of the sedition was a situation that was accompanied by a crime and it was like a coup — we don’t want to say they discussed a coup or overthrowing [the government] — but they prepared the platform for the enemy in a way that the president of America said that they will support it.”

Larijani added, “Some analysts say the sedition is over and it is a topic of history but these inclinations still exist. During that time, with the recommendation of the supreme leader, some stepped to the side but some still insist on their positions. I have told the monitoring institutions to be alert and do not allow these individuals to enter [politics].”

Whether it was advertently or inadvertently, Larijani’s acknowledgment that the protests were not actively trying to overthrow the government opened the door for one of the most vocal advocates of ending the house arrests of Mousavi, Rahnavard and Karroubi.

Parliament member Ali Motahhari wrote an open letter to Larijani on June 30, saying that his remarks provide an opportunity to end the crisis over the 2009 elections.

“If we compare your statements to statements of some of our unaware friends who fundamentally do not accept any protests in the Islamic Republic and view any protest as being against the Islamic Republic and say that the 2009 protests aimed to overthrow the system and was coordinated with America, the United Kingdom and Israel," Motahhari wrote, "then we see that your statements are a light unto the unfair oppression and spitefulness and is an opening to the path to end this bitter situation that threatens the honor of the Islamic Revolution.”

Motahhari called Larijani’s statements the “first step.” He added that the “second step” was to address the issue of “those two individuals,” meaning Mousavi and Karroubi, whom Motahhari described as “politically experienced and a supporter of the Islamic Revolution, the system and the supreme leader.”

Motahhari said that many people were responsible for what happened in the 2009 election but expecting only Mousavi and Karroubi to “repent” and saying that this is the only path to end the crisis would never happen, would not calm society and was not justice. Motahhari encouraged Larijani to take this second step, meaning to apply justice equally to everyone, to a situation that he described as turning Iran’s “social forces to waste.”

Mousavi, Karroubi and Rahnavard were never tried in court. They were placed under house arrest in February 2011 and have had limited access to family and medical personnel since.