Does Rouhani Hold 'Key' to Release Mousavi and Karroubi?

Iranian President-elect Hassan Rouhani said during his campaign that it may become possible to allow the release of those under house arrest and imprisoned after the 2009 presidential election. 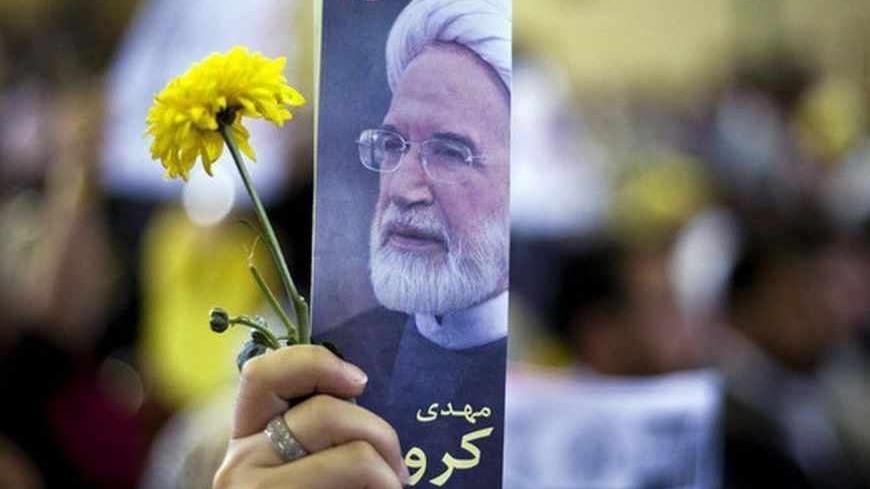 A supporter holds up a picture of presidential candidate Mehdi Karroubi during a rally in Tehran, May 29, 2009. - REUTERS/Raheb Homavandi
Mani Fardad
July 4, 2013

There is much skepticism among President-elect Hassan Rouhani’s supporters about whether he will act, as he pledged during his presidential campaign, to free Reformist leaders Mir-Hossein Mousavi, Zahra Rahnavard and Mehdi Karroubi, who have been under house arrest since 2011.

In a video released by Rouhani's campaign, in a May 13 question-and-answer session held with Sharif University of Technology students, he was questioned about his view on the house arrest of Mousavi and Karroubi. He responded, “I think it’s possible to bring about a condition, over the next year, in which not only those under house arrest but also those who have been imprisoned after the 2009 election would be released.”

Several days after his election, in his first press conference, Rouhani reassured his supporters that he would not forget his promises. This came after one audience member disrupted the proceedings by shouting that Mousavi should be freed. Rouhani, seeking to assure the man who was repeatedly shouting “Remember, Mousavi must be present!” said that he would live up to his promises.

“Some issues need to be resolved … but it takes time and patience,” he said.

The clamor for releasing Reformist leaders rose immediately after the 2013 presidential election results were announced. Thousands of jubilant Iranians took to the streets to celebrate the victory of Rouhani, many of them chanting “Free Mousavi.”

For many of those who voted for Rouhani, one big reason was the hope of freeing the opposition leaders and political prisoners arrested in the 2009 election aftermath. Sajad, a Reformist journalist, believes that Rouhani should resolve the house arrest of Mousavi and Karroubi “behind the scenes.” Talking to Al-Monitor, he said, “I expect that he would resolve the issue in negotiations with authorities without making it known to the public or media.”

Sajad was among those who actively encouraged others to vote for Rouhani in the recent election. “The new circumstances should be explained to the senior decision-makers. Rouhani should explain that in the current atmosphere of delight and hope, the release of the two Reformist leaders doesn’t need to be considered a security issue. Their release can result in confidence-building and prepare the ground for implementing the next government plans,” he said.

After the results of Iran’s 2009 elections were released, former Prime Minister Mousavi and former Parliament Speaker Karroubi, despite repeated warnings by authorities to drop their case, continued to insist the elections were fraudulent. In mid-February 2011, in the wake of their joint appeal for Iranians to demonstrate in support of pro-reform protests in Egypt and Tunisia, security and intelligence officials placed the two former candidates and their wives under house arrest. Karroubi’s wife was released a few months later.

Since then, they have had little contact with the outside world and are surrounded by security agents at all hours. On July 3, Mousavi, accompanied by his wife Rahnavard and a number of security agents, received routine medical treatment at Tehran Heart Center, the opposition website Kaleme reported. He has been suffering from heart disease since last year and according to medical protocols, the routine examination should have been performed two months ago. The cardiac specialists treating Mousavi insisted that he needed to be admitted to the hospital for further tests since he was suffering from dizziness and low blood pressure. The request was reportedly denied by the security agents.

“Considering Rouhani’s moderate and logical stances, it is expected that he will act to resolve this issue, which is highly important for many of those who voted for him,” Hossein Noorani Nejad, head of the publicity and information committee of the Islamic Iran Participation Front (IIPF), told Al-Monitor. IIPF, one of the largest Reformist parties in the country, officially supported Rouhani after the withdrawal of candidate Mohammad Reza Aref.

“During recent years, the space has been prepared for those hard-liners who see their existence in a highly securitized society and suppression of political activists. In the past four years, security forces have dominated the whole society and have been able to shape an atmosphere of suspicion, despair and delusion,” said Noorani Nejad. He put the blame for Iran’s inefficient domestic and foreign policy on those security forces, whose presence has negatively affected Iranians’ social and cultural life, as well. “The atmosphere formed after the [recent] election and the participation of the Green Movement supporters has paved the way to resolve many [political] issues. But those forces are the main obstacle confronting the release of the Reformist leaders. We hope that Mir-Hossein Mousavi and Mehdi Karroubi and other political prisoners would be released with the help of the government, the judiciary and the [supreme] leader.”

The man who raised a key in one of his presidential debates on state TV and said, “It’s the key for all the closed doors in Iran” is now the president-elect, bringing hope and moderation back to Iran. There is no doubt the "key" for this particular closed door is in hands of the supreme leader and not the president.

Iran’s police chief, Esmaeel Ahmadi Moghaddam, said on Dec. 25, 2012 that Supreme Leader Ayatollah Ali Khamenei had approved the detention of the opposition figures in advance of their house arrest. Nearly 25 months after their arrest, Iranian officials, including Iran’s judiciary, have failed to provide any legal justification for the opposition figures’ continuing detention.

In his first appearance after the election, Khamenei supported Rouhani, saying, “In this election, God guided people’s hearts and indeed a real epic was created. Running the state affairs is a difficult task and all individuals and organs should help the president-elect.” Now, although Rouhani seems to have won the support of the supreme leader, the question remains: Does Khamenei hand over the "key" to the Reformist leaders’ house arrest to the president-elect?

Mani Fardad is a pseudonym for a reporter based in Iran.