Iranian opposition leader Mehdi Karroubi ends his hunger strike after authorities meet one demand and reportedly pledge to meet the other. 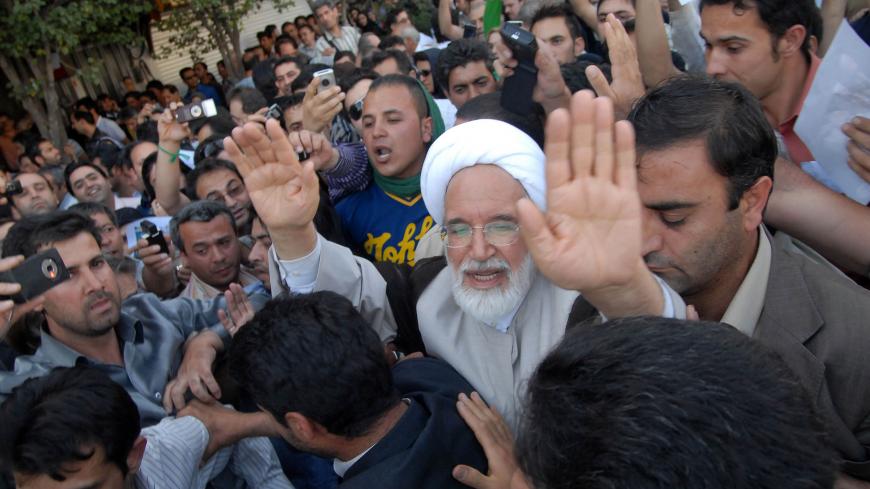 Mehdi Karroubi, the 79-year-old leader of the Green Movement that emerged out of Iran's highly charged 2009 presidential election, has ended his hunger strike after his demands have been reportedly met, according to his family members.

His wife, Fatemeh Karroubi, told Saham News that her husband had begun a hunger strike after morning prayers Aug. 16 to “protest his illegal and unconstitutional house arrest.” Karroubi and the other two movement leaders, Mir Hossein Mousavi and his wife, Zahra Rahnavard, were put under house arrest in February 2011 for calling for protests against the election results.

Saham News said the former parliament speaker and 2009 presidential candidate’s two demands were that security forces leave his house and that he be tried in an open court with his lawyer present. None of the Green Movement leaders have received a trial despite their 6½ years under house arrest. Karroubi has previously written letters to President Hassan Rouhani and Iranian parliamentarian Ali Motahari requesting a trial.

The report also said that the presence of security forces inside Karroubi's home, where they were privy to his private conversations and actions, is unprecedented in Iran and must come to an end. Karroubi has been sick in recent weeks and needed to visit the hospital after suffering heart trouble. According to family members, after mediation by officials from the administration, security forces were ordered to leave Karroubi’s home. The Rouhani administration has also reportedly promised to set a trial date.

His son, Mohammad Taghi Karroubi, told BBC Persian Aug. 16 that his father had requested a trial since the beginning of the house arrests and has said his preference would be to go to Evin prison among other political prisoners rather than continue to remain under house arrest. The son said Karroubi would not protest the sentence of the trial, regardless of what it is. When asked how long his father would keep up the hunger strike, the son said that just as in the protest against the election results, his father would stick with it "until the end."

Mohammad Taghi Karroubi criticized Rouhani, saying the president has a legal duty to uphold the constitution and ensure that Mehdi Karroubi has an open trial. Given the lack of response by administration officials, Karroubi decided to go on hunger strike, his son said.

Many other officials and activists called for the authorities to ensure Karroubi’s well-being and address his demands. Mostafa Tajzadeh, a former Reformist politician who was arrested after the 2009 election and released in 2016, tweeted, “Both requests of Karroubi are legal and logical.” Tajzadeh added that Rouhani should either tell the Intelligence Ministry to leave Karroubi’s home or make the judiciary responsible for keeping Karroubi.

BBC Persian analyst Hossein Bastani tweeted, “The government is determined that Karroubi either die under house arrest or repent.” Bastani added that Karroubi “said things in 2009 that only later have other officials discovered.” Morteza Kazemian, a Reformist journalist who now lives in exile, tweeted that in a conversation with the health minister related to Karroubi’s last hospital visit, Karroubi said that if he were returned to house arrest he would go on a hunger strike. Kazemian's tweet concluded, “Rouhani’s administration is responsible.”

While Rouhani campaigned to end the house arrests of the Green Movement leaders, he has been silent during his presidency. It is believed that his administration has pursued the matter quietly behind the scenes but with no success. Rouhani at the moment is in the process of getting approval for his Cabinet positions. During one of the question-and-answer segments of the parliament session on the ministers, Reformist member of parliament Mostafa Kavakabian instead used his time to address Karroubi’s hunger strike. Kavakabian asked Rouhani to send the health minister to Karroubi’s home or have the intelligence minister resolve the issue of the security forces who are living inside Karroubi's home.