While the Iranian political establishment could once have energized the disheartened public via the release of the detained Green Movement leaders, such a step is no longer likely to have the same impact it once would have had. 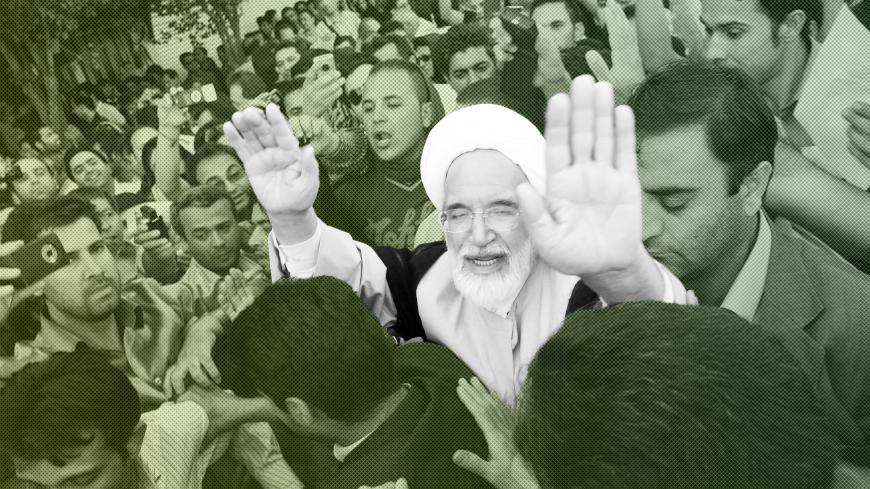 In February 2011, Iranian opposition figures Mir Hossein Mousavi and Mehdi Karroubi — leaders of the Green Movement protests that followed the disputed 2009 presidential election — were placed under house arrest. Now, for the first time, there is serious talk about their potential release. There are also reports that former Reformist President Mohammad Khatami (1997-2005) will soon meet with Supreme Leader Ayatollah Ali Khamenei.

These reports come as Iran is grappling with increased foreign pressures on the one hand and sporadic domestic protests over the worsening economy on the other. Although the reports are being quickly rejected from various quarters, those in favor of lifting the house arrests as well as lifting restrictions on Khatami — including being banned from appearing in media — say these potential measures could unify the country.

Mousavi and Karroubi were detained in February 2011 following their request to hold a public gathering in support of the uprising in Egypt. The political establishment interpreted their request as an attempt at instigating “sedition.” Subsequently, security forces confined both men to their homes without any trial ever being held. Four years later, in February 2015, Iran’s judiciary also tightened restrictions on Khatami, banning all media outlets from mentioning his name or publishing his images due to his support for Mousavi and Karroubi.

Many figures, including several notable members of the establishment, have opposed these moves. At the top of this list is Ali Motahari, an outspoken lawmaker who has on numerous occasions criticized the house arrests and other restrictions, calling them “illegal.” President Hassan Rouhani is another such critic. In the run-up to the 2017 presidential election, Rouhani told his supporters in the northwestern city of Tabriz that if he secured enough votes, he would try to end Mousavi and Karroubi’s house arrests. This had been among the primary demands of Rouhani’s supporters even during his first presidential campaign back in June 2013, with such calls being issued during student gatherings or in speeches by members of parliament.

What is important to note here is that despite the contradictory reports about the potential lifting of the house arrests and the restrictions on Khatami, Iranian society seems to have shifted its focus and is no longer concerned with these matters. Indeed, the protests held in various Iranian cities since last January have been more in pursuit of economic demands. In fact, the key difference between these rallies and those in the aftermath of the 2009 presidential election is the absence of slogans calling for an end to the house arrests. Contrary to previous years, today’s protesters view the Reformists and Principlists as both being responsible for the current worsening situation, with current chants including “Reformists, Principlists, your adventures are over.”

As in past decades, opposition leaders who favor the toppling of the Islamic Republic believe all political movements in Iran are united in the present-day situation. This belief seems to be gaining momentum, as seen by the comments made by Iranians on social media or the protests over economic grievances across the country.

However, within the establishment, the Reformists have always believed, and still do, that removing the restrictions on Mousavi, his wife (women’s rights advocate Zahra Rahnavard), Karroubi and Khatami will herald change and unite the country in face of foreign threats and unfavorable domestic conditions.

Yet it is still not clear if these restrictions will be lifted. One lawmaker quoted parliament Speaker Ali Larijani as saying that the Supreme National Security Council has not issued any calls for the lifting of the house arrests, despite such claims by Karroubi’s son. More importantly, Saham News, a website close to Karroubi, has claimed that Iran’s supreme leader has rejected Rouhani’s proposal to release the leaders of the Green Movement from house arrest.

The important point to bear in mind is that if the Green Movement's leaders are freed, it would not have much of an impact on the domestic front, given the country’s current situation. The concerns of today’s protesters are not focused on social and political freedoms. Rather they have economic concerns for which they blame the Islamic Republic in its entirety.

This assessment is not just that of the Islamic Republic’s opponents. Some influential figures in the Reformist camp are also of the opinion that ending Mousavi and Karroubi’s house arrests will no longer have the impact it would have had previously.

For instance, Reformist Mohsen Safaei Farahani, a well-known former member of parliament, is among those who believe that ending the house arrests will satisfy the public, re-energizing it and instilling hope, just as further success in the FIFA World Cup by Iran’s national soccer team could have initiated. However, he believes that these effects “will not be long term,” adding that “because of the negative impact this crisis has had on people’s lives, this happiness will be fleeting, and they will soon return to their previous challenges and difficulties.”

Sadegh Javadi Hesar, a member of the National Trust Party whose secretary-general is Karroubi, also shares this opinion. Amid heated discussions regarding the potential end to the house arrests, Javadi Hesar has said that this would not be enough to improve the status quo. The perhaps most notable confirmation of this viewpoint is Khatami’s 15-point plan for ending the political deadlock in Iran, which he introduced in a recent speech before former members of parliament. Of the 15 points, only one dealt with the detention of the Green Movement leaders, indicating that this is no longer a determining factor for changing the atmosphere in Iranian society.

In such a situation, it seems that ending Mousavi and Karroubi’s house arrests was once indeed a winning ticket in the hands of Iran’s establishment, which, if played in a timely manner, could have been a decisive element in influencing the disheartened public opinion. However, since last summer, the prospect of the efficacy of such a step seems less likely. In fact, this winning ticket could soon become even less credible among an increasing portion of Iranian society. In other words, the issue of the house arrests is no longer society’s main concern. As such, the political establishment is not likely to offer the public concessions in the form of an end to the restrictions.