President Hassan Rouhani will not open a new battlefront against hard-liners in pushing for the release of Mehdi Karroubi and Mir Hussein Mousavi while the nuclear negotiations are taking place. 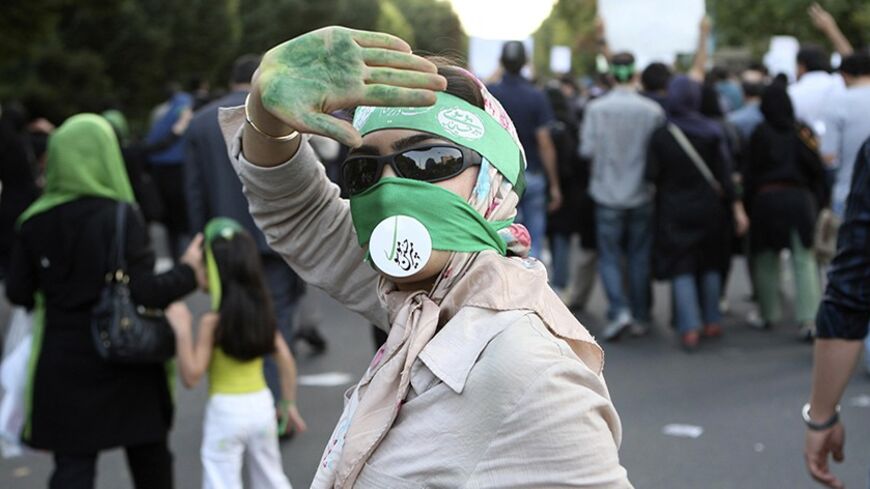 A protester shows her green-painted palm in support of defeated reformist presidential candidate Mir Hossein Mousavi during a silent demonstration in Tehran against the results of the Iranian presidential election, June 17, 2009. - REUTERS/Fars News

The 2009 Iranian presidential elections were followed by organized, massive street demonstrations under the banner of the Green Movement against the disputed victory of Mahmoud Ahmadinejad. The movement was a loose coalition of reformers, moderate conservatives and seculars.

Websites associated with the defeated candidate, Mir Hossein Mousavi, the former prime minister of Iran (1981-89) and one of the prominent leaders of the Green Movement, claimed that according to leaked information from the Ministry of Interior, the real number of votes were 21.3 million for Mousavi and 10.5 million for Ahmadinejad. It should be noted that a portion of religious conservatives could have voted for Mousavi because until that date his devotion to the Islamic system and velayat-e faqih (guardianship of the jurist), was approved by the ultra-conservative Guardian Council, which vets the candidates, otherwise he could not have run for presidency.

It's then safe to assume that even taking these numbers — which for obvious reasons could be biased in favor of Mousavi — at face value, the conservative power elite that rules Iran and at the time was represented by Ahmadinejad, had at the very least over 10 million supporters. What's important to conclude here is that even based on the numbers given by the Greens, the street demonstrators were representing a faction of society, while the regime also enjoyed sizable support at the time. Therefore, the clashes of 2009 were not simply about the people against the regime. Rather, they were the manifestation of the revival of a struggle within a fragmented society.

The Green Movement's backbone was shaped by the middle- and upper-middle class. This explains why the movement was focused on civil rights and never raised any economic demands. Undoubtedly, the movement represented a sizable faction of a society that sought change as a result of frustration with Ahmadinejad and the system throwing its support behind him. In any event, based on these facts it could be concluded that the 2009 clashes were not about the whole society against the system. Rather, it was the revival of a 100-year-old battle within fragmented Iranian society. On the one side stood modernists; primarily middle- and upper middle-class young urbanites, and on the other side were traditionalists or religious conservatives with no distinctive class, although some observers maintain that mainly the low-income shaped this camp.

One of the factors that played a major role in Hassan Rouhani’s June presidential victory, as we predicted during his campaign, was the strong support that the former Iranian president and the de facto leader of the reform movement, Mohammad Khatami, cast behind him. Khatami was also a supporter of the Green Movement, but after the arrests of activsts and house arrest of its leaders, the Green Movement was not an active movement that played an organized role in the elections. During his campaign, Rouhani, although considered a moderate belonging to the camp led by the former Iranian president Akbar Hashemi Rafsanjani, echoed many reformists’ views, including freedom of speech, de-securitization of the atmosphere that governs the country and freedom for political prisoners, particularly ending the house arrest of the two Green Movement leaders, Mehdi Karroubi and Mir Hossein Mousavi. Many observers in Iran believe that his landslide victory in the first round was realized partly because of this aspect of his campaign.

With the formation of Rouhani’s moderate government, an opposition movement, namely the Green Movement, almost lost its relevance inside Iran. Particularly because of the daily attacks of hard-line newspapers and websites, as well as hard-liners in the parliament and the conservative clergies on Rouhani and his team, his popularity among the former supporters of the Green Movement remains unshaken, if not enhanced.

As a result of the weakening of the opposition inside Iran, the opposition outside of the country is significantly pacified, certainly when compared to the Ahmadinejad era. The advocates of the Green Movement who reside outside of Iran rarely hold interviews with the western media outlets or publish articles in credible American or European newspapers. The TV station of Voice of America has stopped giving considerable airtime to the Iranian opposition, which sought to overthrow the system by encouraging people inside Iran to engage in anti-government protests and other forms of civil disobedience.

Based on some reports, the case of Mousavi and Karroubi, the two leaders of the Green Movement who were put under house arrest in 2011 after their call for a demonstration in support of the uprisings in Tunisia and Egypt, has been given to the National Security Council to deal with. Ali Shamkhani, the current secretary of the National Security Council, who was appointed to the post by Hassan Rouhani last year, was Mohammad Khatami’s minister of defense for the whole eight years of the reformist’s presidency. He was dismissed when Ahmadinejad took office in 2005.

Shamkhani is considered a moderate but has good relations with reformists. Sources in Iran say that he is willing to bring Mousavi and Karroubi’s case to an end. However, there is fierce opposition to their freedom from the hard-liners’ camp. According to them, these “leaders of the sedition” — which refers to the street protests of 2009 and 2010 — must be tried under the charges of betraying the country.

Despite his promise to make efforts to free the political prisoners, in particular Mousavi and Karroubi, Rouhani has chosen complete silence in this respect. Some observers in Iran assert that while the government is engaged in its mega-agenda of bringing the nuclear issue to an end, which in itself has caused a great amount of friction between him and his government on one side and the hard-liners on the other, he will not open new battlefront against the hard-liners.

That said, in February, Mohammad Javad Zarif, Iran’s minister of foreign affairs, without mentioning their names, said that Rouhani would honor his commitment with regard to ending Mousavi and Karroubi’s house arrest. As it appears, any serious activity toward the freedom of the two Green Movement leaders should be expected after the resolution of the nuclear standoff.