Where Are Iran’s Reformists?

Sune Engel Rasmussen reports from Tehran that the reformists and green movement have been reduced to “near invisibility” in the run-up to the presidential elections scheduled for June. 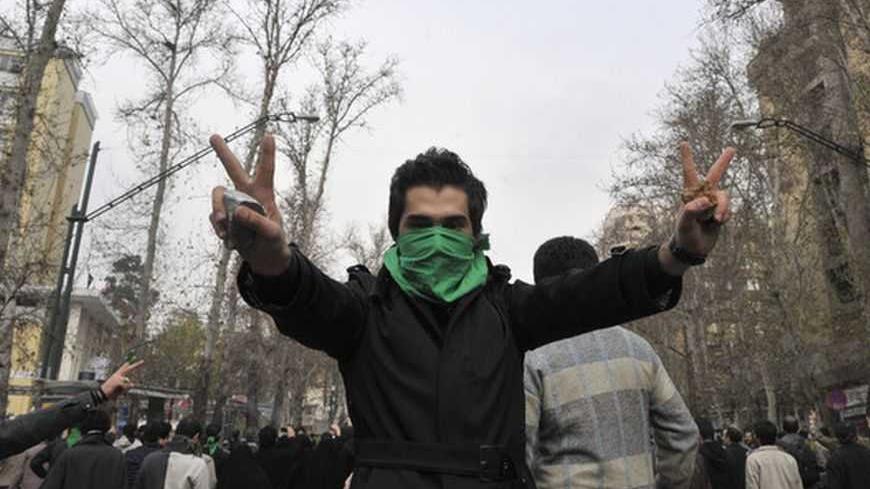 An Iranian protester with his face covered with a green mask flashes the victory sign as he holds stones in his hands during clashes in central Tehran Dec. 27, 2009. - REUTERS
January 17, 2013

TEHRAN, Iran — Five months before Iran’s presidential elections, speculation is rife over who will succeed Mahmoud Ahmadinejad. The president is constitutionally forced to leave office in June, and will leave behind a widespread yearning for change. But this summer’s elections are unlikely to usher in a new reformist era in Iran.

Two years after opposition leaders Mir Hossein Mousavi and Mehdi Karroubi, along with Mousavi’s wife Zahra Rahnavard, were placed under house arrest, the space carved out for reformists in national politics has narrowed to near-invisibility. For reformists, the elections will not be a genuine fight for power, but a catch-22 of either boycotting the vote in protest of the fraudulent elections of 2009 or participating to keep a presence in the system.

“Why should people vote when the person they view as their representative is still under house arrest?” asked Ali, 27, a longtime activist and supporter of Mousavi who, like others interviewed by Al-Monitor, asked not to be fully named for fear of government retribution.

Azadeh, 34, said she won’t vote either, but thinks a genuine reformist candidate could get a lot of support: “People don't want to lose hope; they want to rely on someone,” she said. “They just vote for the least bad candidate.”

Even if the religious leadership eventually allows a reformist candidate in the race, it has already taken pains to ensure that no one harbors the same democratic illusions that in 2009 made millions of Iranians feel genuinely cheated and march in the streets after Ahmadinejad’s disputed victory.

On Friday, Jan. 11, Ayatollah Ahmad Jannati, who as Head of the Guardian Council vets all political candidates, jabbed at former presidents Mohammad Khatami and Hashemi Rafsanjani, who have called for “free elections.” Monafeghin (“hypocrites,” a term normally used for the exile opposition group Mojahedin-e Khalq) and monarchists abroad say similar things, Jannati said, “and think that they can topple the Islamic Republic with free elections.”

He also reminded Iranians: “Those who meet the necessary criteria will never be refused a chance to run in the elections, but if they lack them, they clearly will not be allowed to run.”

The Supreme Leader’s representative to the Revolutionary Guard chimed in: “It was exactly in the era of the reformists that the emergence of the Imam of Time [the Shiite Messiah] was postponed for hundreds of years,” Ali Saeedi said.

Over the past four years, the requirements imposed on presidential candidates have narrowed, and observers believe that anyone who might continue the agenda of the embattled Ahmadinejad — and all reformists who stand a chance — are likely to be excluded. As a result, Iranians have even less incentive to vote.

“I’m not going to vote. Not after what happened last time,” said Banin, 29, an engineer. In the affluent neighborhood of north Tehran where she lives, many share that opinion.

Although she thinks people would vote for a good reformist, Azadeh doesn’t believe in any of the politicians whose candidacy could be approved, she said. “What I am and what I think is not accepted under the law in Iran.”

Rafsanjani is hardly a reformist, but occasionally speaks out against the establishment. For various reasons — including his age and solid power base that he doesn't want to risk — Rafsanjani is unlikely to run, but is still eager to exert his influence on the elections. As a result, hard-liners have tried to neutralize the 82-year-old tycoon, who in the autumn saw two of his children temporarily jailed. Whether he will be reined in, however, is uncertain.

Khatami is still a reformist figurehead. Although many felt betrayed when he voted in the parliamentary elections in 2012, people fondly remember his years as president, and he could potentially gather a lot of support, were he to run. Because of his popularity, the regime wants Khatami to endorse the elections, but he faces pressure to stay off the presidential ticket himself. While his recurring calls for a free vote will be fervently ignored, he will probably vote anyway to ensure that reformists maintain a foothold in the system. Many of his supporters, however, wish that he would do nothing more than that.

“I hope Khatami doesn’t encourage anyone close to him to run,” said Ali, referring specifically to Mohammad-Reza Aref, Khatami’s former first vice president, to whom many look as a potential presidential candidate. Other reformists have expressed interest in running: Hossein Kamali, a former labor minister, and, further down the ladder, Esmaeil Haghparast, a journalist who was detained after the 2009 elections.

While hard-line rhetoric against Mousavi and Karroubi is still venomous, the opposition leaders are less present in the daily conversations of Tehran. Amid sanctions and currency collapse, urban Iranians are gradually losing their typically voracious appetite for politics. People refer to the Green Movement as mere memories, said Azadeh. “I think they even forgot about Mousavi, that he's in house arrest.”

Opposition activists have been off the streets since Feb. 14, 2011, when security forces choked pockets of demonstrations around Tehran, arranged in solidarity with the Arab uprisings, before they could pick up steam. Now, the movement is not only comatose after a brutal crackdown following the elections, but also completely atomized.

“The Green Movement exists as an idea,” Ali insisted, pointing out that Supreme Leader Ali Khamenei always talks about fetneh, "sedition." “Why would he do that if the Green Movement didn’t exist? If the Iranian people get an opportunity to protest in the street, I promise you, you will hear the same slogans you heard before.”

Although both opposition leaders renounced any formal leadership in the Green Movement, they have come to embody the movement’s democratic struggle.

“I see him as a collective consciousness of the Green Movement inside Iran,” Ali said of the 70-year-old Mousavi. “He wanted to combine democratic aspirations and economic justice.”

Whomever the Supreme Leader chooses to favor as Iran’s next president, it will be a regime loyalist without Ahmadinejad’s itch to challenge the religious leadership. The reformists will not pick a battle that's already lost. For now, they will wait it out.

Sune Engel Rasmussen is a freelance journalist. Follow him on @SuneEngel.