Like bears emerging from a four-year hibernation, Iranian reformists are beginning to speak out again, empowered by the election of President Hassan Rouhani and Mahmoud Ahmadinejad's departure. 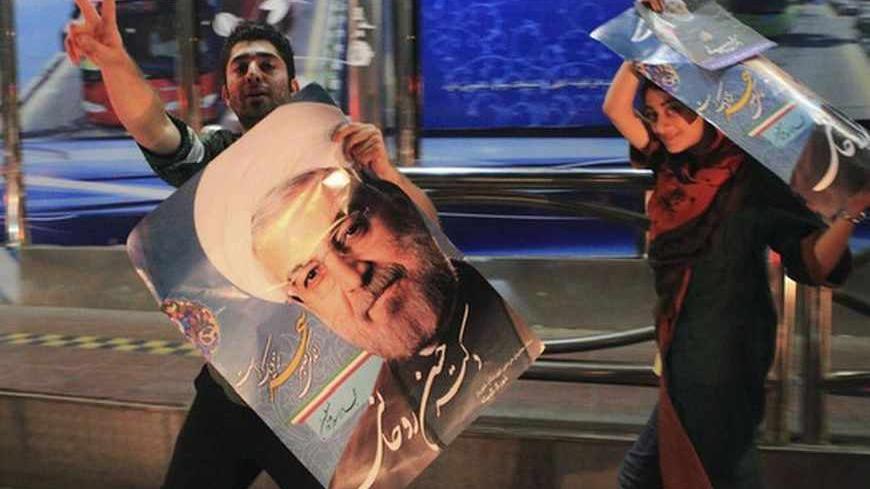 Supporters of Hassan Rouhani celebrate his victory in Iran's presidential election along a street in Tehran, June 16, 2013. - REUTERS/Yalda Moayeri

TEHRAN, Iran — Toward the end of a lively press conference Aug. 6 with Iran’s new president, a young reporter for the Reformist newspaper Shargh prefaced her question by thanking Hassan Rouhani for the mere chance to participate.

“After eight years, we have the opportunity to talk to a president,” said the reporter, alluding to the fact that her newspaper had been excluded from similar sessions with former president Mahmoud Ahmadinejad. She then proceeded to press Rouhani on whether and when he would release political prisoners still jailed for supporting Reformist candidates Mir Hossein Mousavi and Mehdi Karroubi in the disputed 2009 presidential elections.

Allegations of fraud in Ahmadinejad’s re-election led to mammoth popular protests and a brutal government crackdown. Mousavi and Karroubi have both been under house arrest for more than two years and scores of lawyers, journalists, women and labor activists are still in jail. Mohammad Karroubi, a son of the detained candidate, told Al-Monitor in an email that his family has heard nothing officially about his father’s fate, that all Green Movement activists must be freed before his father will accept release and that neither Karroubi nor Mousavi is about to “apologize” for their 2009 activities unless “the system apologized for the police crackdown in the last four years."

Less than a week after Rouhani’s Aug. 4 inauguration, it is far too soon to say that Iran will be a kinder, gentler country than it has been under Ahmadinejad. Ayatollah Ali Khamenei, the supreme leader, still has the final say on internal security matters, along with key officials from the Revolutionary Guard and the intelligence establishment. But with the return to the presidency of a centrist who won thanks in large part to the backing of Ahmadinejad’s less hard-line predecessors — Mohammad Khatami and Akhbar Hashemi Rafsanjani — the oppressive mood in Tehran has lifted slightly and the political kaleidoscope is shifting again.

The change is particularly poignant for that group of Iranian political figures who began life as leftists after the 1979 revolution and evolved into Reformists. Like bears waking up from a four- and in some cases eight-year-long hibernation, many are slowly re-entering the public sphere.

One of them is Saeed Laylaz. A former deputy interior minister under Khatami and a talented economist and columnist, Laylaz infuriated Ahmadinejad by criticizing the president’s economic illiteracy and rash remarks on controversial issues such as the Holocaust and Israel. Laylaz predicted to this author in 2006 that Ahmadinejad’s policies “will collapse this country in the long term,” a prescient remark given Iran’s current economic crisis.

In 2009, Laylaz supported Mousavi and campaigned for him on university campuses. After the vote, Laylaz was imprisoned for a year — until 2010 — and spent four months in solitary confinement.

Following Rouhani’s surprise victory June 14, Laylaz started returning reporters’ phone calls again. He told Al-Monitor in an interview this week that he is cautiously optimistic about the future. “I am positive at the moment,” he said.

Laylaz said some of his optimism is based on Rouhani’s cabinet picks, noting their expertise, educational credentials and long experience compared to many of Ahmadinejad’s choices — nearly two dozen of whom were impeached by parliament for incompetence and/or malfeasance.

Among those awaiting confirmation now are Oil Minister-designate Bijan Zangeneh, who served in the same role in Khatami’s cabinet and was energy minister under Rafsanjani and Mousavi, when the latter was prime minister in the 1980s.

The nominee for education minister, Ali Najafi, is a Harvard graduate, Laylaz noted, and held the same position under Rafsanjani.

Rouhani himself, Laylaz said, has considerable economic knowledge gleaned from long service in parliament and on Iran’s Supreme Council of National Security, where Rouhani was Khamenei’s representative for 23 years.

“He’s much more familiar with the economy than Khatami was when he came in,” Laylaz said of Rouhani.

A prominent academic associated with the Reformist camp, Nasser Hadian, is also speaking out again. Hadian, a US-educated professor of political science at Tehran University who has also taught at Columbia University, avoided prison in part because he is a childhood friend of Ahmadinejad. Before the revolution, they went to school together in the lower-middle-class district of eastern Tehran called Narmak.

Rouhani, Hadian told Al-Monitor, has so far refrained from publicly embracing direct talks with the US because he needs to move cautiously in Iran’s complicated political environment and doesn’t want to raise expectations he cannot fulfill. Unlike Ahmadinejad and Khatami, Rouhani “does not want to say anything he can’t deliver,” Hadian said.

Iran’s new president appears acutely conscious of the level of frustration within Iranian society about the deteriorating economy, characterized by high inflation and unemployment.

Many Iranians interviewed by Al-Monitor this week expressed skepticism that Rouhani would bring appreciable improvement in their circumstances no matter how many US-educated technocrats are in his cabinet.

In Narmak, Ahmadinejad’s old neighborhood, a 78-year-old former mechanic and construction worker complained that his son, a college graduate, has not been able to find a job for the past three years — a common refrain among Iranians.

“If you have money, you can eat; if not, you can’t,” said the retiree, who requested anonymity.

With his priority Iran’s economy — and the nuclear negotiations, which are tied to possible sanctions relief — many Iranians inside and outside the country wonder how much effort Rouhani will put into reviving the rest of the Reformist agenda of less pressure on civil society, more openness in the media and more intellectual freedom at universities.

Some human rights activists have questioned the nomination of Mostafa Pour-Mohammadi as justice minister. Ahmadinejad’s interior minister from 2005-2008, Pour-Mohammadi is a former deputy intelligence minister said to be implicated in the execution of thousands of dissidents in 1988 and the assassinations of intellectuals a decade later.

At his press conference, in response to a question from Iran’s Students' News Agency about the repressive atmosphere on college campuses — which has contributed to a huge brain drain from Iran — Rouhani asserted that “The atmosphere and environment of colleges and universities should be more open,” with more leeway for young people to express opposing viewpoints.

He also staunchly defended his cabinet picks against the smears of hard-line columnists such as Hossein Shariatmadari, who complained in an editorial July 31 in the powerful Keyhan newspaper that some of Rouhani’s nominees were supporters of the 2009 “sedition.”

“We don’t have sufficient time to do trial and error,” Rouhani said, explaining that he had chosen cabinet members according to their expertise, not their political affiliations.

Still, most of the nominees worked for Khatami, Rafsanjani or Mousavi, giving Iranian politics a back-to-the-future feeling as Reformists re-emerge blinking into the sunlight.

Said Laylaz optimistically, “We are out of the jail that Ahmadinejad made of this country.”