While some are skeptical over the proposed culture minister who is the son of a hard-line ayatollah, many expect an improvement in the ministry under his leadership. 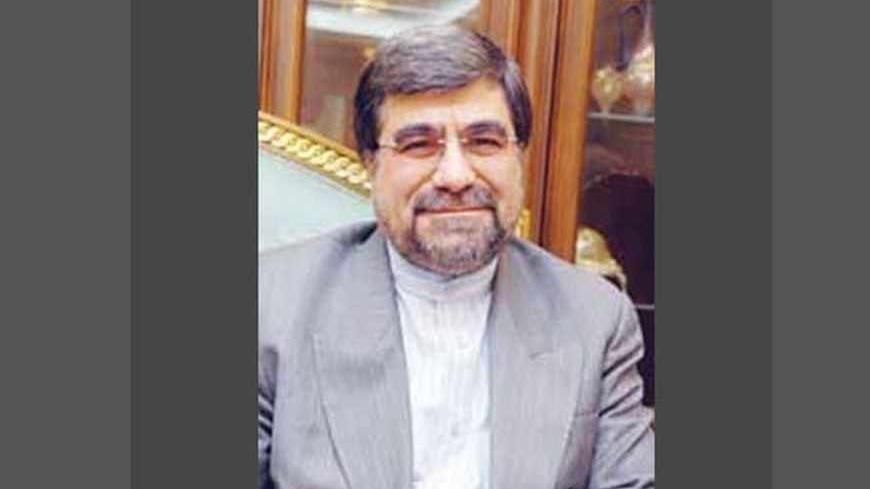 Ali Jannati, son of Ayatollah Ahmad Jannati, and a veteran diplomat, is on the short list for Minister of Culture. - habibtoumi.com
August 2, 2013

TEHRAN — Less than two months after the astonishing victory of Hassan Rouhani in Iran’s 11th presidential election, it appears that the honeymoon period of the president-elect, who will officially become president on Aug. 3, is over. His picks for the cabinet have created a new controversy in the Iranian political arena.

Although the media outlets close to both Reformist and Principalist factions in Iran have made a lot of predictions about Rouhani’s cabinet, it appears that at least the choice for one of the ministries has been finalized. This is the Ministry of Culture and Islamic Guidance, which is incidentally one of the most controversial ministries for both political factions as well as social forces demanding change in Iran.

“As far as the offer given to me is concerned, the decision is final,” said Ali Jannati on Monday in an interview with the Reformist Bahar newspaper. He continued: “They have asked me to prepare a plan of action for this ministry (Culture and Islamic Guidance) and I am in the process of writing the plan. I believe that the decision of the president-elect is final.”

The ministry of Culture and Islamic Guidance is officially in charge of planning and executing cultural policies. Since it has a wide range of authority in supervising the press and expanding the freedom of speech, it has a very important position in today’s closed political atmosphere. The Reformist press from 1997 to 2000 managed to become a strong arm in support of democracy, having received a green light from Ata'ollah Mohajerani, the minister at the time who served during the first term of Reformist Mohammad Khatami’s presidency. They also managed to criticize the policies and organization inside the establishment.

Film and music industries, with the support of the guidance ministry had a noticeable growth in the 1990s and many taboos were broken. After pressure from conservatives in parliament who tried to impeach him, Mohajerani resigned from his post in 2000.

In the past eight years of the presidency of Mahmoud Ahmadinejad, Reformists have experienced a grim decline. By appointing Mohammad-Hossein Saffar-Harandi and Mohammad-Ali Hosseini, both former commanders of Islamic Revolutionary Guards (Sepah), Ahmadinejad created a great dam in front of a the river which was set to flow by the Reformists. Hundreds of newspapers have been closed down since 2005 and dozens of journalists have been imprisoned following the unrest in 2009. The House of Cinema, the official guild of the film industry, has been closed down and a large number of artists and journalists, whether to escape prison or with the hope of a better future, have chosen to live in exile.

A high-ranking political journalist in Tehran told me: “Journalism is almost over in Iran, what is left is only a joke. Our hands and feet were tied in the past eight years with a very strong rope. Despite all the precautions, the Ministry of Guidance still does not remove its sword which is hanging above our heads. The next guidance minister must have an armor of steel so he can turn himself into a shield for us and allow us to do our work.”

Ali Jannati is 64 years old and in reality is most famous for being the son of Ayatollah Ahmad Jannati, the chairman of the Guardian Council and one of the most powerful hard-liners and anti-Reformist clerics. In April, the Council disqualified Ayatollah Hashemi Rafsanjani, the centrist former president and the chairman of Expediency Discernment Council of the System, from running for president. However, unlike his father, Ali Jannati has a very good relationship with Rafsanjani. He became Rafsanjani’s chief of staff in 1988. During Rafsanjani’s first term, he was chosen as the governor of Khorasan, the largest province in Iran. After the first Persian Gulf war, he went to Kuwait and continued his work until he was appointed as the vice minister of the Interior Ministry, in the first government of Ahmadinejad.

One of the issues that have made many members of the Iranian opposition worried about Jannati is that he was appointed by Ahmadinejad as the vice minister of the Interior Ministry, a key position which is responsible for conducting elections. However, it should be noted that it was Mostafa Pourmohammadi, himself quite close to Rafsanjani, who chose him. Jannati was removed from his post a year later and returned to Kuwait, a country where he had secretly lived and fought as a guerrilla in support of Ayatollah Ruhollah Khomeini and the effort to topple the shah before the 1979 revolution.

What is extremely important while surveying the history of the political elite in Iran is paying attention to the deep changes that many of them have experienced in the past three decades. Rafsanjani, Mehdi Karroubi and Mir Hossein Mousavi are examples of key figures who have all experienced changes in reputation and image in the last 10 years.

This chance exists, to a degree, for Jannati as well. His interview on May 30 with the centrist newspaper Ghanoon has opened some windows of hope. By emphasizing that he has not consulted with his father in accepting this post, he has drawn a high wall between his own views and those of the chairman of the Guardian Council. At the same time, he has talked about his respect for Rafsanjani. He has mentioned the struggle of filmmakers, writers, musicians, and journalists with many problems in the government of Ahmadinejad and has promised to make “major changes.”

The other positive element in his new interview was his referral to Khatami’s time in the guidance ministry, from 1982-1986 and 1989-1992; Jannati has promised to consult with him since “he will definitely have useful ideas.”

Jannati has described the media as the “fourth pillar” of democracy: “If a publication has made a criticism which has not been to our liking, we should not immediately bring out our sword and cut it down. We should rather correct ourselves. In the same way that when we see our faults reflected in the mirror, we should not break the mirror, we should break ourselves.” He has also promised to reopen the Journalists Union and has referred to the closing down of the House of Cinema by the guidance ministry in Ahmadinejad’s government as “destructive.”

Unconfirmed reports on the Saham News website, a website close to Karoubi, reported that Rouhani had put Ahmad Masjed-Jamei in his list of ministers, a name which Khatami had apparently endorsed for that position. But that choice was met with the strong opposition of Ayatollah Ali Khamenei, the supreme leader of the Islamic Republic.

A source close to Khatami, who wishes to remain anonymous, says: “I do not think Khatami meant to force Rouhani to choose Masjed-Jamei.” However, a journalist who resides in Tehran and is close to prominent Reformist figures, disagrees. “I have talked to Mousavi Lari (the interior minister of the Reformist government) and he is very angry. Reformists say that it is Rafsanjani who is putting together the team for Rouhani. Their issue with the guidance ministry is not so much with Ali Jannati as it is with the reason why Rouhani has not put up a fight in front of Khamenei.”

Ali Jannati and Hassan Rouhani may have one year to show their determination in creating serious changes in the media and cultural arena. Rouhani is lucky in that he has described the main function of his “famous key” to be the opening of the “nuclear crisis” lock, “removing the sanctions” and bringing prosperity to Iran’s crumbling economy. These policies will balance society’s expectations of him in matters of culture and politics. In case of success in foreign policy and economy, he will have more time to carry out his careful policies and getting further away from the point of confrontation with the intellectuals, journalists and pro-democracy forces in Iran.