The children of Ayatollah Hashemi Rafsanjani have been targeted by Iranian prosecutors as a means to curb his political ambitions. 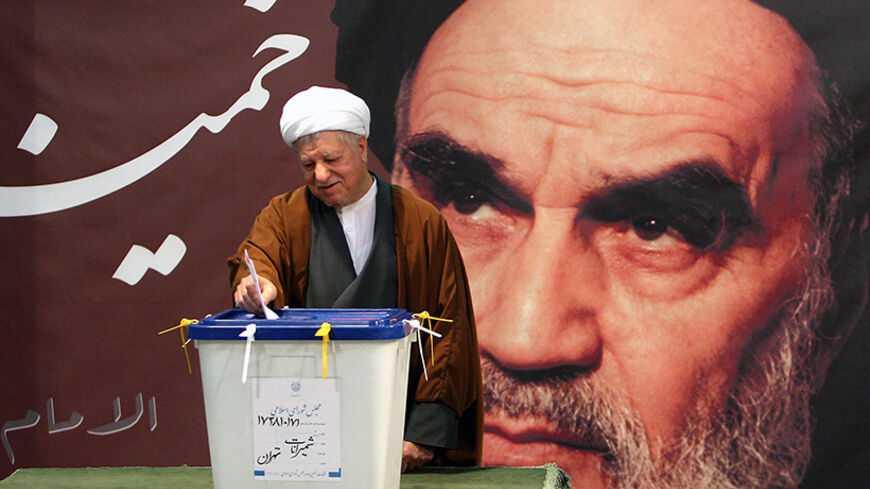 A year after the election of Ayatollah Hashemi Rafsanjani’s preferred candidate, Hassan Rouhani, as president of Iran, Rafsanjani's own chances of being elected chairman of the Assembly of Experts are ever increasing. In response, it appears that conservatives in Iran are trying to attack and weaken Rafsanjani by putting one of his sons on trial.

On Aug. 2, the first session of the trial of Mehdi Hashemi — Rafsanjani’s second son — was held behind closed doors, presided over by Judge Mohammad Moghiseh. Moghiseh is known for having imposed long prison sentences on journalists, student activists and high ranking Reformists.

Hashemi was once the head of the Iranian Fuel Conservation Organization, but left Iran after the contested 2009 presidential elections. When he returned after three years on Sept, 23, 2012, he was interrogated at the airport. The next day he was sent to the intelligence branch of the judiciary. However, later that same day, with an arrest warrant, he was sent to the Evin Prison. His incarceration lasted two months and 23 days until he was finally set free on a bail of about $3 million.

Abbas Jafari Dolatabadi, the prosecutor-general of Tehran, stated that a 125-page prosecution case has been brought against Hashemi, involving some 12 offenses.

Taghi Rahmani, a political analyst and a high ranking member of the Nationalist-Religious party — one of the most important Iranian opposition groups in the last two decades, told that Al-Monitor Hashemi’s case was more closely related to the desire of the Islamic Revolutionary Guard Corps (IRGC) and the extreme conservative groups to control Rafsanjani. He said, “Rafsanjani in particular is capable of curbing the extreme right and the military powers inside the Iranian government. There are several reasons for this, the first of them being that he is on good terms with the clerics in Qom, that he has an efficient bureaucracy around him, that he enjoys conditional support from the Reformists. On the other hand, because of his relative disagreements with the policies of the supreme leader, he also has some popular acceptance.” He continued, “This results in the opposition of the military forces to him, and the extreme right … tries to control him.”

Tasnim News Agency (which is owned by the IRGC) devoted much of its coverage to the case of Mehdi Hashemi on the day of his trial. On Aug. 2, Mehdi posted a Facebook update, accusing the news outlets that published negative commentary on his case of being connected to the intelligence establishment. He wrote, “Today, as I was reading the news from a couple of agencies and websites connected to a certain entity, I realized that these are not news agencies. Indeed, we are facing a gigantic intelligence system.”

The deep fault line between the extremists and Rafsanjani presented itself about a month after the start of the bloody conflicts between the 2009 election demonstrators and the government. In front of several hundred thousand protesters, during the Tehran Friday prayers on July 17, 2009, Rafsanjani took the side of the Green Movement and criticized the widespread detainment of the protesters, skyrocketing his popularity among activists and the Reformists in Iran.

After that, Rafsanjani was never allowed to conduct the Friday Prayer in Tehran again. However, he publicly criticized the interruption of the process of free elections in Iran. After the house arrest of Mir Hossein Mousavi and Mehdi Karroubi on Feb. 14, 2011, he also publicly demanded the release of the leaders of the Green Movement. Mohammad Hossein Karroubi, the son of Mehdi Karroubi, quoted Ayatollah Rafsanjani as saying at a November 2013 meeting, “If anything happens to them under house arrest, the shame of it will never be cleared off of the regime’s record.”

All of these stances have prompted the judiciary's efforts to keep him at bay. In September 2012, his daughter Faezeh Hashemi was convicted of spreading propaganda against the state and sentenced to six months in jail and banned for five years from any political, cultural, or journalistic activities.

Also, in January 2013 the supreme leader reacted to Rafsanjani's criticism of the absence of “free elections” in Iran, saying, “Haven’t we had more than three decades of free elections in Iran? In what country is the election process more democratic than in Iran?”

In spite of all these pressures, Rafsanjani registered as a candidate for the 2013 presidential elections. The Guardian Council, however, decided to disqualify him, even though he was one of the most senior politicians of the Islamic Republic, served as speaker of the parliament during the 1980s, had served two terms as president and is the current chairman of the Expediency Council.

Nonetheless, three days before the elections, Rafsanjani and former President Mohammad Khatami signed a letter in support of Rouhani. An editor working for the Reformist newspaper Shargh told Al-Monitor: "Rafsanjani became even more popular after he was disqualified, as the depth of his disagreement with Ayatollah Khamenei became clear to everyone. This is why Rafsanjani’s support of Rouhani encouraged the moderates to vote for Rouhani. In the absence of Karroubi and Mousavi, Rafsanjani and Khatami have become the main pillars of the Reformist movement in Iran. Rouhani directly thanked Rafsanjani and Khatami during a television address only a few hours after he won the election."

The administration of Rouhani is also notably similar to that of Rafsanjani and during the previous year, Rafsanjani’s influence has grown. Petroleum Minister Bijan Namdar Zangeneh, Industry Minister Mohammad Reza Nematzadeh, Transportation Minister Abbas Akhoundi and Mohammad Ali Najafi, who was appointed as the head of Cultural Heritage and Tourism Organization but later resigned, were all part of Rafsanjani’s administration as well. In addition, Foreign Minister Javad Zarif, Culture Minister Ali Jannati, Justice Minister Mostafa Pourmohammadi and Communications Minister Mohammad Vaezi all have close ties to Rafsanjani.

More importantly, given the fact that Ayatollah Mahdavi Kani is in a coma and Rafsanjani now has a chance to become the chairman of the Assembly of Experts, his son’s trial appears to be a new attempt to weaken Rafsanjani and reduce his chances. Technically, the Assembly of the Experts chooses the supreme leader and oversees his actions. However, the overseeing of the actions of the supreme leader has never truly happened in the past three decades. Nonetheless, given Ayatollah Khamenei's age, the role of this council in choosing the next supreme leader will be crucial.

It appears that if Rafsanjani, a political figure whom Taghi Rahmani labels “complex and pragmatic,” shows a desire and readiness to become the new chairman of the Assembly of the Experts, the pressure on his children might increase.