Beyond a public-relations gesture in advance of President Hassan Rouhani’s US trip, the release of political prisoners could ease the divisions in Iran following the disputed 2009 presidential elections. 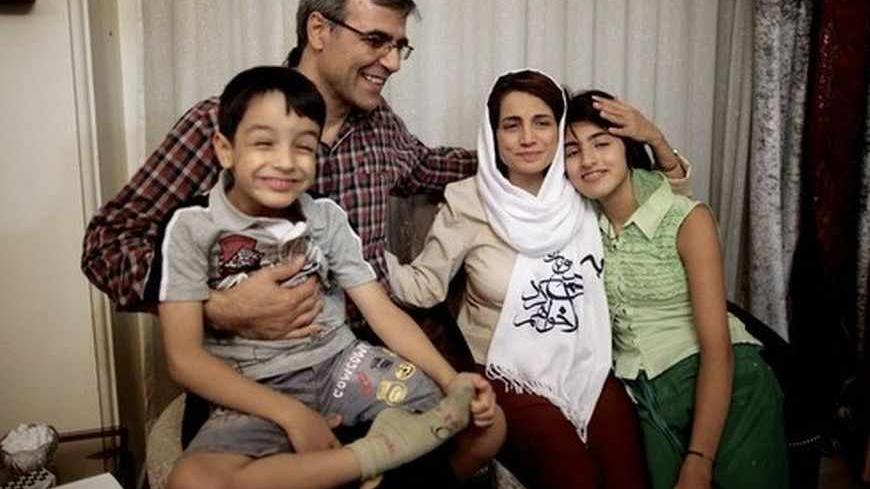 Iranian human rights lawyer Nasrin Sotoudeh sits with her husband Reza Khandan, her son Nima and her daughter Mehraveh at their home in Tehran after being freed from prison, Sept. 18, 2013. - BEHROUZ MEHRI/AFP/Getty Images

Days before Iran’s new President Hassan Rouhani is due to arrive in New York, the Iranian government freed 11 political prisoners Sept. 18, beginning to fulfill Rouhani’s campaign promises to ease domestic repression even as he seeks more constructive engagement with the outside world.

The news of the release of eight women — including well-known human rights lawyer Nasrin Sotoudeh — and three men including Mohsen Aminzadeh, a former deputy foreign minister, appeared timed to coincide with Rouhani’s debut on a major international stage at the annual meeting of the UN General Assembly (UNGA). Rouhani’s predecessor, Mahmoud Ahmadinejad, also engineered such releases before his trips to New York each September; Mohammad Khatami, whom Ahmadinejad succeeded, used his first visit to UNGA in 1998 to announce Khatami announced that Iran would not support implementation of a fatwa against British author Salman Rushdie.

Wednesday’s actions potentially have much greater resonance in Iran. Those freed were all Iranians jailed after the disputed 2009 presidential elections that led to a massive government crackdown on Iran’s Reformist movement, human rights activists and civil society in general. The election of Rouhani, who was backed by Reformist former President Mohammad Khatami and centrist Akhbar Hashemi Rafsanjani, has been viewed by many Iranians as a way to start putting the divisions of 2009 behind them.

Haleh Esfandiari, an Iranian-American academic who was held in Evin prison for four months in 2007 on trumped-up charges of espionage and was freed just before Ahmadinejad came to New York that year, told Al-Monitor that Wednesday’s announcement was “great news. My sense is that [Rouhani] didn’t want to have to deal with questions regarding high-profile women activists who are in prison. Sotoudeh is well known around the world, and [Nobel peace prize laureate] Shirin Ebadi talks about her and other women activists who are in jail all the time.”

Esfandiari, who directs the Middle East program at the Woodrow Wilson International Center for Scholars, noted that Rouhani would still face questions about the most prominent Iranian political detainees — former presidential candidates Mir Hossein Mousavi and Mehdi Karroubi — who have been under house arrest for more than two years.

During this year’s presidential election campaign and since his inauguration, Rouhani has been peppered with questions from Iranian journalists about Mousavi and Karroubi and about what the new president can do to alleviate what he has referred to as Iran’s “securitized” environment. In his first news conference as president, Rouhani said that releasing the two — who have been accused of “sedition” but never formally charged or tried — would be a decision to be made after “negotiations among the three branches of power” in Iran — presumably the presidency, the office of Supreme Leader Ali Khamenei and the security establishment. According to recent reports, Mousavi and Karroubi’s release will be handled by the new head of Iran’s Supreme Council of National Security, retired Admiral Ali Shamkhani, who is said to be an admirer of Mousavi, a former prime minister during the 1980-88 Iran-Iraq war.

Hadi Ghaemi, executive director of the International Campaign for Human Rights in Iran, told Al-Monitor that while he hopes that Mousavi and Karroubi will also be freed soon, “We should not forget that dozens of Green Movement leaders are still in prison. What Khamenei referred to as ‘heroic flexibility’ [in a recent speech to Iran’s Revolutionary Guard discussing Iran’s foreign policy], they should be performing domestically with regard to those who put Rouhani in office.”

Asked about the timing of the prisoners' release and its connection with Rouhani's upcoming visit, Alireza Miryousefi, spokesman for Iran's UN Mission, told Al-Monitor he was too busy helping to arrange the schedule for the Iranian delegation to comment.

State Department spokeswoman Marie Harf said in a statement emailed to reporters: "We welcome today’s reports that the Iranian government has released several prisoners of conscience, including human rights lawyer Nasrin Sotoudeh. President Rouhani pledged repeatedly during his campaign to restore and expand freedoms for all Iranians, and called for expanded political and social freedoms, including freedom of expression. In the months ahead, we hope he will continue to keep his promises to the Iranian people."

The statement went on, "The United States will continue to urge the Iranian government to take steps to improve the country’s human rights situation. Accordingly, we renew our call today for Iran to release all prisoners of conscience in its custody."

Since Rouhani assumed the presidency on Aug. 4 and appointed a largely technocratic cabinet, the government has taken other steps to alleviate the repressive atmosphere Iranians have endured for years and especially since 2009.

Iran last week reopened the House of Cinema, an organization representing directors and performers in the country’s celebrated film industry. Officials have also announced that sex segregation at universities will end and that professors fired or forced into retirement for their Reformist political views will be reinstated.

However, not all signs are positive. The dreaded “fashion police” who harass and arrest women for not wearing conservative hijab are reportedly back on the streets after a two-month respite. And Facebook and Twitter — briefly available on Monday, Sept. 16 to Iranians without government filtering — is apparently back behind a cyber Berlin Wall.

Ghaemi’s organization, in a statement emailed to journalists, called for the “immediate release of all prisoners of conscience, including two Iranian-Americans currently imprisoned in Iran for political reasons, Amir Hekmati [a former US Marine] and Christian pastor Saeed Abedini,” a convert from Islam.

The group also urged Rouhani to allow the UN Special Rapporteur on human rights in Iran, Ahmed Shaheed, to visit the country. Shaheed has issued two reports harshly criticizing Iran for its treatment of political dissidents and religious minorities as well as the high number of executions in Iran relative to the country’s population.

“One of President Rouhani’s main goals for this trip is to reduce international tensions. He cannot achieve this goal without fully addressing the pressing human rights situation in Iran today,” Ghaemi said.