How to get Iran to improve its human rights

The arrest of another Iranian-American dramatizes efforts by Iran’s security establishment to undercut President Hassan Rouhani but also jeopardizes economic gains from the nuclear agreement. 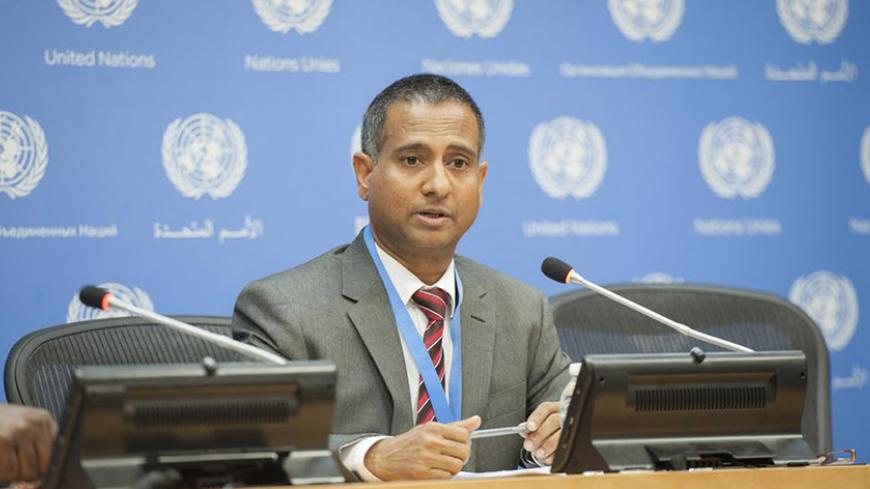 ​As Iran begins implementing a landmark nuclear deal, hard-liners opposed to the government of President Hassan Rouhani are continuing a domestic political crackdown and jeopardizing a wider opening to the United States and the Iranian diaspora.

Reports that the Intelligence Ministry of the Iranian Revolutionary Guard Corps has seized a fourth Iranian-American — United Arab Emirates-based businessman Siamak Namazi — came as Ahmed Shaheed, the UN special rapporteur on the situation of human rights in Iran, issued a new report documenting Iran’s extensive use of the death penalty, continued crackdown on the press and civil society and discrimination against women and ethnic and religious minorities.

At the same time, the Iranian government has stopped a decadelong policy of denying or ignoring such international condemnations. Human rights activists say that gives them hope that multilateral pressure will eventually bear fruit.

In September, a delegation including members of the judiciary, the Iranian High Council for Human Rights and Foreign Ministry and anti-narcotics officials spent a day and a half with Shaheed in Geneva addressing his concerns, including Iran’s heavy use of the death penalty in drug-related cases, he said.

The talks are “not a substitute for a country visit with full access” to those whose rights have been abused, Shaheed told a Washington audience Oct. 29, but they are a start.

Shaheed agreed with Daniel Calingaert, executive vice president of Freedom House, an organization devoted to promoting human rights, that absent some dramatic improvement, the UN should launch a formal commission of inquiry into Iran’s rights practices. This is a more serious step than simply renewing Shaheed’s appointment next spring.

Calingaert said the UN Human Rights Council should also consider stronger resolutions against Iran that set benchmarks for compliance. The US government could consider visa bans and asset freezes for individuals tied to human rights abuses, he added.

Iran’s Supreme Leader Ayatollah Ali Khamenei has threatened to stop implementing the nuclear deal if new sanctions are imposed on his country for any reason. But rights advocates say Iran remains vulnerable to other types of pressure and that it cares about its international standing at a time when it is only just being admitted to other key multilateral policy discussions —– such as recent talks on the Syria war — in the aftermath of the nuclear accord.

Hadi Ghaemi, executive director of the International Campaign for Human Rights in Iran, reminded Al-Monitor of how Iran backed off in 2010 from a sentence of stoning to death for a woman, Sakineh Mohammadi Ashtiani, who had been convicted of adultery. The presidents of Turkey and Brazil called for clemency, Ghaemi said, as did leaders of other countries with which Iran has important economic or political ties.

Shaheed agreed that multilateral pressure was important and noted that the Islamic Republic considers itself a leading member of the so-called Global South.

Asked by Al-Monitor why Iran was being subjected to so much criticism when other countries in the region, such as Saudi Arabia, also have poor records on human rights, Shaheed said it was a function not just of Iran’s abuses but of its lack of cooperation and communication with rights organizations.

“Iran had 549 unanswered communications” on rights issues with the United Nations over the past five years, Shaheed said, and has not allowed him or other rights advocates to visit the country. He added that the Iranian diaspora community also pressured the United Nations to investigate Iran — something lacking in the case of Saudi Arabia — and that Iran, with more than a century of political reform efforts, has a greater potential to live up to its own laws.

The human rights issue is one element of a difficult balancing act for the Iranian regime as it seeks to reap the economic benefits of the nuclear deal but stave off domestic political change. Khamenei and Iranian hard-liners have warned that the United States remains hostile to Iran and will try to use greater economic integration as a way to subvert the Iranian system.

Although he campaigned on a pledge to “de-securitize” Iranian society, Rouhani has focused on the nuclear issue and has had little success in reducing the power of shadowy security and intelligence bodies since he came to office two years ago.

The judiciary remains out of his purview. Its head — currently Sadegh Larijani —- is appointed by Khamenei and has the power to name, remove and relocate judges, said Mehrangiz Kar, a prominent lawyer and exiled Iranian human rights activist.

Among the most troubling rights indicators is the steady rise in executions in Iran from fewer than 100 a year a decade ago to 800 — and possibly 1,000 — by the end of this year. Iran justifies the practice by saying it is necessary to reduce the large number of addicts in the country. According to the UN report, Iranian officials told Shaheed that “At least 4,000 and as many as 10,000 individuals die annually as a result of drug abuse.” Shaheed said he is trying to convince Iranian officials that other methods are more effective in dealing with the drug scourge than capital punishment.

Iranian authorities also continue to crack down on journalists and civil society activists. Shaheed said more than 40 journalists and bloggers are in jail, a number that he said remains constant. Even as some are let go, others are arrested in an “apparent revolving door,” he said.

On Nov. 2, a post on the Facebook page of a prominent Iranian journalist, Isa Saharkhiz, announced that he had been arrested for “insulting the Supreme Leader” and “propaganda against the regime.” Saharkhiz previously spent four years in prison after 2009 presidential election protests.

The prolonged detention of Iranian-Americans has gotten the most attention in the United States. Iranian officials have suggested that they want to swap the detainees for Iranians convicted of sanctions-related crimes but the Obama administration has rejected any equivalence between the cases. US officials have repeatedly demanded freedom for Washington Post correspondent Jason Rezaian, pastor Saeed Abedini and ex-Marine Amir Hekmati.

There has been no confirmation from the Iranian government about the detention of the fourth Iranian-American. A family member, who asked not to be identified, told Al-Monitor, “Siamak is an employee of Crescent Petroleum, completely detached from Iran business and someone who had gone to Iran to visit his family. He was [not] and is not engaged in any type of consulting for companies to do business in Iran.”

Namazi has promoted US-Iran relations and like many dual nationals, was hopeful that the conclusion of the nuclear agreement would help the country open up and encourage members of the wealthy Iranian diaspora to contribute to Iran’s economic development. Hard-liners worry, however, that more Iranian contact with the United States will undercut their power.

“Khamenei called on the Guards to be vigilant against Americans coming to Iran,” Ghaemi told Al-Monitor. He said there are other Iranians, whom he would not name, who are “being interrogated on a weekly basis” for their contacts with US citizens.

The crackdown extends beyond Iranian-Americans to other dual nationals. Ghaemi noted that a Lebanese-American, Nizar Zakka, disappeared in Tehran last month after attending a conference on women in sustainable development.