Human rights activists say the nuclear deal and recent elections open a “window of opportunity” to pressure the Islamic Republic to improve its record on human rights. 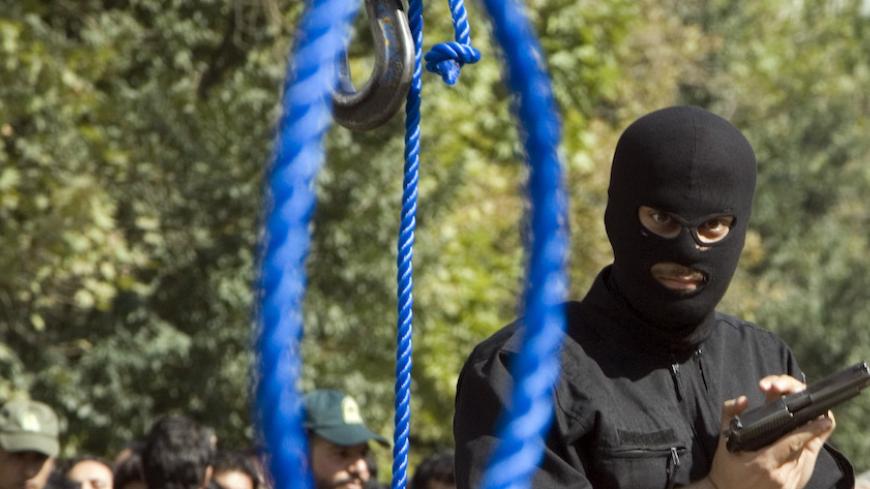 An Iranian policeman checks his gun before the hanging of Majid Kavousifar and Hossein Kavousifar in Tehran, Aug. 2, 2007. Iran hanged Majid and Hossein, the killers of a judge who had jailed several Reformist dissidents, before a crowd of hundreds of people on Thursday. - REUTERS/Raheb Homavandi

Iran last year maintained its grim record of executing more people per capita than any other country in the world, the majority for drug-related offenses, according to the latest report by Ahmed Shaheed, the UN Special Rapporteur on the situation of human rights in Iran.

The report, which was shared with Al-Monitor in advance, states that Iranian authorities executed between 966 and 1,054 people in 2015, including four people under the age of 18. The total reflects a tenfold rise over the past decade and exceeds the 2014 figure by more than 200.

Saudi Arabia, which has a much smaller population than Iran, executed 151 people last year and appears to be on track to execute more this year. China, the world's most populous nation, is believed to have executed the largest number of individuals last year — estimates are well above 1,000 — but per capita, Iran exceeds all other countries.

Stung by international and domestic criticism over this grim statistic, Iran has begun to debate substituting life in prison for the death sentence for many drug offenses, which accounted for 65% of those executed last year, according to the UN report.

Shaheed noted that in “December 2015, 70 members of parliament presented a bill that — if approved by the legislature and the Guardian Council — would reduce the punishment for nonviolent drug related crimes from death to life imprisonment. … While reserving judgment on the particulars of the bill, the Special Rapporteur welcomes attempts to reduce the staggering number of executions in the country and appreciates the government’s willingness to re-evaluate existing law with consideration for human rights obligations.”

According to an annex to the Shaheed report, those on death row include at least 1,200 Afghans. Of 59 non-Iranians executed in 2015, 16 were Afghans. The annex noted that “foreign nationals are particularly vulnerable as they often do not speak the language in which the legal proceedings take place, are unfamiliar with the laws under which they are charged, have inadequate access to legal assistance and support, and are often forced to sign confessions.”

According to Shaheed, Iran has revised its criminal procedure code to require all death sentences to be reviewed by the country’s supreme court. In addition, the new code is supposed to guarantee access to legal counsel, but the provisions are not always implemented, particularly for those charged with political crimes.

The UN report said that there are 53 people in Iranian jails for offenses related to freedom of expression. Among them are at least 17 journalists and media activists including Atena Farghadani and Issa Saharkhiz. Also detained on unspecified charges are Siamak Namazi, an Iranian-American businessman, and his 80-year-old father, Baquer, who was arrested when he returned to Iran from Dubai to see his jailed son.

The Iranian government has responded to the Shaheed findings by accusing the UN of “double standards.” Iran said that “appointing a country specific rapporteur for a country like Iran, which has complied with its commitments toward its citizens and international community, is unwarranted, meaningless and absolutely destructive." At the same time, the government said that “in keeping with its intention to cooperate with the UN human rights mechanisms, and motivated by the aim to provide the Special Rapporteur with reliable and authentic information, our missions in Geneva and New York as well as other officials of the Islamic Republic of Iran have met with the Rapporteur for several times, and engagement with him will continue.”

The report includes detailed responses by Iran to most of its findings.

The Iranian Mission to the United Nations did not respond to requests for additional comment.

Expectations for an improvement in Iran’s human rights record rose with the 2013 election of President Hassan Rouhani but were disappointed as his administration focused on achieving a landmark nuclear accord.

In the aftermath of that agreement and Feb. 26 parliamentary elections that appear to have strengthened the Rouhani government at the expense of hard-line forces, pressure is building again to decrease the repressive role of the judiciary, Intelligence Ministry and the intelligence branch of the Islamic Revolutionary Guard Corps.

“Right now is a huge window of opportunity,” Hadi Ghaemi, executive director of the International Campaign for Human Rights in Iran, told Al-Monitor. With Iranian officials striving to re-integrate Iran into the global economy, “this is a key time to let the government know that normalization and extension of relations has to be accompanied by improvement in human rights.”

It will be interesting to see if members of the UN Human Rights Council share that view or whether attitudes toward Iran soften in light of the nuclear deal and warming Iran-Europe relations. Every spring since Shaheed was appointed Special Rapporteur in 2011, the council has renewed the office’s mandate.

According to Shaheed’s office, 13 other countries are also facing special UN scrutiny for their human rights records, most of them in Africa and Asia. Countries under mandates to monitor and report on their records include North Korea, Eritrea, Belarus, Myanmar and Syria. Israel also has a Special Rapporteur focused on Israeli treatment of Palestinians in the West Bank and Gaza.

Shaheed, a former foreign minister from the Maldives, has repeatedly asked Iran for permission to visit but has had to settle for consultations with Iranian officials in Geneva.

Ghaemi said he doubted Iran would allow him into the country but that a successor might have better luck. The last time a UN Special Rapporteur for Iran actually visited the country was in 2005 under then-President Mohammad Khatami.

Rouhani’s government has engaged more actively with Shaheed than the administration of President Mahmoud Ahmadinejad, although the UN official noted in his latest report that in 2015, Iranian officials responded to only five of 24 communications from his office, reducing its rate of reply “from 40% in 2014 to 20.83% in 2015.”