Mohammad Javad Larijani, the secretary of Iran’s Human Rights Council, has been joined by other officials in his repeated calls to cut down on executions for drug offenses. 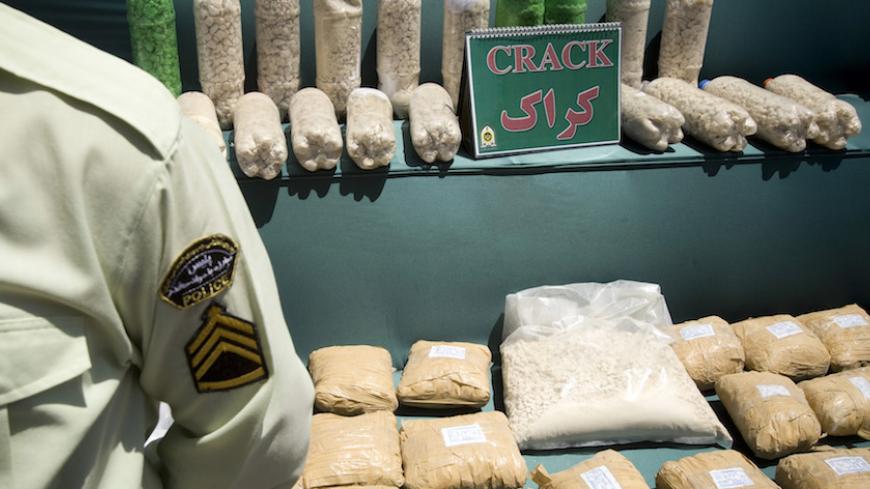 An Iranian anti-narcotics policeman stands guard beside a display of confiscated drugs during a ceremony concluding anti-narcotics maneuvers in Zahedan, 1,600 kilometers (1,000 miles) southeast of Tehran, May 20, 2009. - REUTERS/Caren Firouz
Arash Karami
@@thekarami
May 19, 2016

Nearly a year and a half after announcing that Iran would reconsider its frequent execution of drug offenders, Mohammad Javad Larijani, the secretary of Iran’s Human Rights Council, is still calling for Iran to lower its execution rate for drug-related crimes.

Speaking to reporters at a May 16 conference titled “Finding the court’s role in protecting the accused,” Larijani couched his concerns in diplomatic terms, saying, “We need to have a [better] method to fight against drugs. It’s possible that execution is not the only path, or that high execution rates do not have a desirable result. We recommend that the legislation … be reconsidered.”

Perhaps more than other officials, Larijani is aware of how Iran’s executions for nonviolent crime reflect on the country. He said enemies of Iran, such as Western countries and Israel, use this issue to portray a negative image of Islam and the Islamic Republic and the problem needs to be “unveiled.”

While China leads the world in state executions, Iran is the leader in per capita executions, with approximately 1,000 executions in 2015. According to UN Special Rapporteur Ahmed Shaheed, 65% were for drug offenses. In previous statements, Larijani had put the percentage of drug-related executions at 80%.

Officials from the Hassan Rouhani administration have also publicly addressed this issue in recent days. Interior Minister Abdolreza Rahmani-Fazli said May 18, “The discussion of punishing smugglers and punishment's influence on the activities of drug smugglers is one of the main issues being discussed by the Iran Drug Control Headquarters.” Rahmani-Fazli, who is also the secretary of that organization, added that there will be meetings with judiciary officials, including the head of the judiciary, to form a joint committee headed by the attorney general to review methods for punishing drug convictions.

The topic also made the May 19 front page of Iran newspaper, which operates under the administration. In an article headlined “The death penalty for drug smugglers, yes or no?” a half-dozen sociologists and legal experts were interviewed about the efficacy of executing drug smugglers. Unsurprisingly, the interviewees concurred that no studies show that executions have had a positive impact in decreasing drug use or drug smuggling. Rather, drug use and smuggling appears to be increasing.

Larijani and Rahmani-Fazli are not the only officials to address concerns about this issue. In May 2014, Iran’s top prosecutor Gholam-Hossein Mohseni-Ejei, a hard-line official not known for his consideration for Iran’s international public image, surprised many by calling for a “review” of existing laws to address the high execution rate for drug offenses. He suggested punishing only the heads of drug-smuggling networks. In December 2015, 70 parliament members signed on to a bill to eliminate the death penalty for nonviolent drug smuggling. Larijani himself first addressed the problem with Iran’s high execution rate in December 2014.