Iran judiciary in conflict over executions

The debate about executions in Iran over drug-related crimes is heating up. 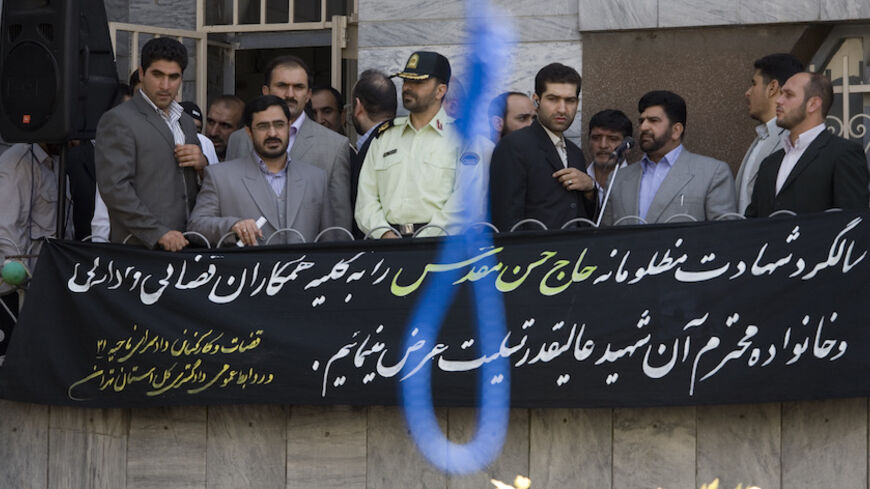 Tehran Prosecutor General Saeed Mortazavi (2nd L) attends the hanging of Majid Kavousifar and Hossein Kavousifar in Tehran, Aug. 2, 2007. Majid and Hossein had killed a judge, Hassan Moghaddas, who had jailed several reformist dissidents. The banner reads: "We give our condolences to all our judiciary colleagues and the deceased family on the anniversary of the martyrdom of Hassan Moghaddas." - REUTERS/Morteza Nikoubazl

Despite a decrease in the number of executions, Iran continues to be the nation with one of the highest rates of executions in the world, mostly for drug-related crimes. According to Amnesty International, Iran executed a reported 567 people in 2016. In 2015, the number was 977. Still, at 567 people, Iran was executing more than one person a day. This issue has been openly discussed in one of the unlikeliest places: Iran’s judiciary.

Hojat al-Islam Gholam Hossein Mohseni Ejei, the spokesman for Iran's judiciary, in a Aug. 9 speech addressed Iran’s high execution rate with respect to drug-related crimes. “Do we want to solve all of our problems with punishments and increasing punishments?” he asked. “Some say, you have increased the punishment but there is still crime. On the issue of illegal drugs, we have laws from many years ago and many times [the punishment] has been increased and now they want to decrease it.”

Mohseni Ejei, a hard-liner who has held important positions in the Islamic Republic, including that of prosecutor general, intelligence minister and prosecutor for the Special Court for Clergy, also criticized Western organizations regarding their condemnations of Iran’s high execution rate. “Even if the executions for drug-related charges is lowered, Westerners will not say that we did right,” he said.

While Mohseni Ejei criticized those who want to eliminate the death penalty, he said he did not want his criticism of these people to be viewed as his supporting capital punishment. “I do not want to support the death penalty,” he said. He indicated that it might be a good idea to not resort to the death penalty so much in drug cases.

This is not the first time that Mohseni Ejei has addressed the high execution rates in Iran. He has a history of making mildly critical remarks without ever completely backing away from the death penalty. In May 2014, in his position as prosecutor general, he suggested only punishing the heads of drug-smuggling networks. Last month, he said that the death penalty should be one of a choice of punishments, and that treatment and prevention should be part of the mix. He said that if there were no death penalty at all, the situation with Iran’s drug use and smuggling would be worse.

Iran’s parliament approved a proposal in July that would amend the country’s anti-drug laws with respect to small-time drug use. The Guardian Council would need to approve any bill passed by parliament. Regardless, Iran’s judiciary chief, Ayatollah Sadegh Larijani, has remained steadfast in his support of the country’s use of executions. In September 2016, Larijani unequivocally denied that Iran would eliminate the death penalty for drug smugglers.