Iran has released five American prisoners including Washington Post correspondent Jason Rezaian, in an apparent swap with Iranians jailed in the United States for sanctions violations. 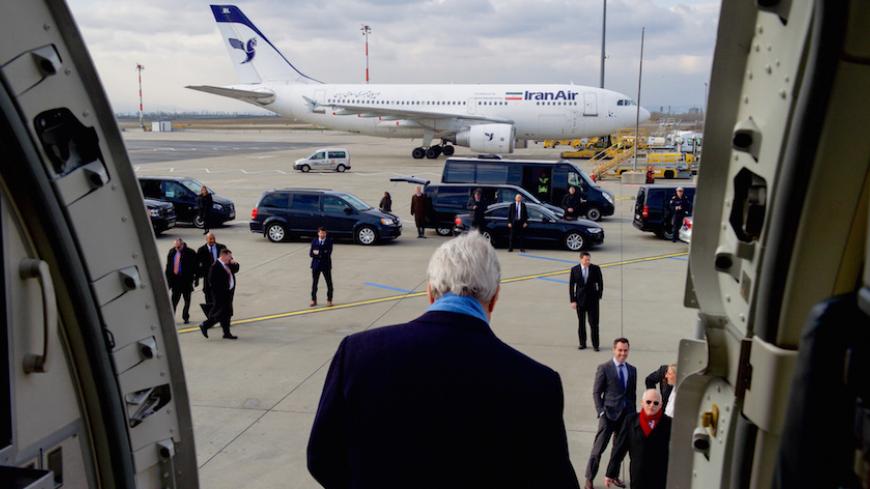 An Iran Air jetliner sits across the tarmac as US Secretary of State John Kerry deplanes at Vienna International Airport in Vienna, on Jan. 16, 2015, to attend a meeting with Iranian Foreign Minister Mohammad Javad Zarif. - US State Department flickr account

While the nuclear talks and negotiations on freeing the Americans were not directly related, US officials said, a separate channel on the detainees accelerated after conclusion of the Joint Comprehensive Plan of Action (JCPOA) in July.

The Obama administration freed seven Iranians convicted of violating US economic sanctions and agreed not to seek extradition of 14 others charged with similar offenses. None of them had committed violent acts or been charged with supporting terrorism, US officials said.

“Through a diplomatic channel that was established with the focus of getting our detained US citizens home, we can confirm Iran has released from imprisonment four Americans detained in Iran: Amir Hekmati, Saeed Abedini, Jason Rezaian and Nosratollah Khosravi-Roodsari,” a US official said in a statement Jan. 16.

Iran also freed a fifth American, researcher Matthew Trevithick, who was apparently detained in November but whose case had not been publicized.

Relationships forged in the course of the nuclear negotiations helped advance efforts to gain the release of detained Americans, said Secretary of State John Kerry.

“There is no question that the pace and progress of the humanitarian talks were accelerated by the relationships forged … over the course of the nuclear talks,” Kerry told journalists at a press conference in Vienna Jan. 16.

“We are reminded of diplomacy's power to tackle difficult challenges,” Kerry said. "Iran has kept its word, and we will continue to do the same.”

US policymakers involved in forging the US-Iran relationship said the dramatic events demonstrate the value of patient, clear-eyed and persistent diplomacy.

“It was hard to imagine when we began back channel talks nearly three years ago that we'd reach this stage,” former US Deputy Secretary of State William J. Burns, who led the secret US diplomacy with Iran in 2013, told Al-Monitor.

Even as implementation day marks an important milestone, however, “we have to remain clear-eyed about the challenges ahead in implementation, and in embedding our approach to the nuclear agreement in a wider strategy for dealing with threatening Iranian actions on other fronts,” Burns said.

“It seems to me that we are now in a new phase of our relationship with Tehran,” Suzanne DiMaggio, director of Iran programs at the New American Foundation, who helped lead Track II dialogue involving former US and Iranian policymakers for the past decade, told Al-Monitor.

“It is still far from normalization of relations,” DiMaggio said. “But there clearly are very well established, high-level, direct channels of communication for engagement… Both Washington and Tehran are coming to appreciate how that channel can serve their interests.”

As anticipated, the nuclear deal went into full effect Jan. 16 as Iran completed a series of steps to limit its nuclear activities, including mothballing thousands of centrifuges, sending out most of its stockpile of low-enriched uranium to Russia and removing the core of a heavy water reactor and filling it with concrete. Taken together, these measures extend from several months to more than a year the time it would take Iran to amass enough fuel for a nuclear weapon.

Yukiya Amano, director general of the International Atomic Energy Agency (IAEA), issued a statement announcing that he had submitted a report to the IAEA board and the UN Security Council “confirming that Iran has completed the necessary preparatory steps to start the implementation” of the JCPOA.

Amano said the report was issued after “Agency inspectors on the ground verified that Iran has carried out all measures required under the JCPOA to enable Implementation Day to occur.”

Immediately after Amano’s announcement, European Union foreign affairs chief Federica Mogherini and Iranian Foreign Minister Zarif read a joint statement to reporters in Vienna announcing the lifting of all nuclear-related sanctions. The White House followed with an executive order from President Barack Obama authorizing the removal of those sanctions, which primarily affected the ability of foreigners to do business with Iran.

Another US official, also speaking on condition of anonymity, told reporters that Obama had terminated four executive orders and part of a fifth that threatened  penalties against foreign companies purchasing Iranian oil and gas, investing in Iran and interacting with Iranian banks. Iran will also be able to gain access to about $50 billion of an estimated $100 billion in assets frozen in foreign accounts, the official said.

According to the official, 400 Iranian individuals and entities have been removed from a US blacklist, while 200 remain sanctioned because of their alleged association with terrorism or human rights abuses.

Most American companies are still blocked from doing business with Iran, but US firms can now sell civilian airliners, aircraft parts and services, food, medicine and medical devices to Iran and purchase Iranian carpets, caviar and other foodstuffs.

While the arms control and sanctions relief aspects of the nuclear deal have been known since July, the prisoner swap was a surprise. Freedom for the five could improve the climate in the United States for implementing the nuclear deal, even though several Republican presidential candidates and former Secretary of State Hillary Clinton criticized Iran for seizing the Americans in the first place.

In addition to the five people it freed, Iran offered to continue to try to determine the whereabouts of Robert Levinson, a former FBI agent who went missing in Kish Island in 2007.  However, there was no mention of a seventh American – dual national Siamak Namazi, a Dubai-based businessman who was detained in Tehran in October by the Islamic Revolutionary Guard Corps’ intelligence branch.

Iran’s swift release of 10 US sailors Jan. 13 who mistakenly sailed into Iranian territorial waters in the Persian Gulf now seems partly explained by the fact that a larger exchange was in the works. So too, was the Obama administration’s decision to delay imposing new sanctions on Iran for two ballistic missile tests last year that did not violate the JCPOA but were banned by other UN Security Council resolutions.

There have been reports for months that some sort of prisoner swap was being considered. Last summer, the Hekmati family released a letter written by Amir Hekmati to President Hassan Rouhani noting that, “For the past three years, my family has been receiving emails and phone calls from individuals in Iran proposing prisoner exchanges, going so far as asking my family to lobby publicly for the release of these individuals.”

There have also been recent reports of better treatment of the detainees. The Hekmati family told The New York Times that Amir had been taken from his prison cell to a hospital for medical tests for a swollen lymph node and was scheduled for another checkup soon. The Tasnim News Agency reported Dec. 30 that prison officials were considering releasing the ex-Marine for good conduct.

Rezaian’s mother, Mary, and wife, Yeganeh Salehi, were granted a long visit with the jailed journalist at the end of the year, and Salehi was also allowed to give him new clothes.

There had been no word about the condition of pastor Abedini, 35, who was arrested in 2012 while in Iran trying to raise funds to build an orphanage in the city of Rasht. Abedini, from Boise, Idaho, is a convert from Islam who had conducted prayer services in private homes in Iran from 2000 to 2005, according to Tiffany Barrans, the international legal director for the American Center for Law and Justice. He was serving an eight-year sentence for subverting Iran’s national security.

The Rouhani government has been embarrassed by the recent detentions as it sought to convince US and other Western businessmen that it is safe to visit and invest in Iran following the lifting of sanctions. Many Iranian officials are eager to see the wealthy US-Iranian diaspora contribute to Iran’s economic recovery. However, hard-line elements appear to fear both competition and cultural subversion from such an influx. Shadowy intelligence services would not have been allowed to apprehend and hold these individuals without the backing of Supreme Leader Ayatollah Ali Khamenei.

While it could not immediately be confirmed which Iranians serving time in US prisons were granted clemency, IRNA, the Islamic Republic News Agency, reported that they are Nader Modanlo, Bahram Mechanic, Khosro Afghahi, Arash Ghahraman, Touraj Faridi, Nima Golestaneh and Ali Saboonchi.

Saboonchi, 35, of Parkville, Md., was sentenced to two years in prison in February 2015 for allegedly sending electronic equipment to Iran. Mechanic, 69, a Houston businessman and dual Iranian-American citizen, was awaiting trial on federal charges that he exported $24 million worth of microelectronics to Iran. Ghahreman, is an Iranian-American serving a 6½-year sentence on charges that he planned to export equipment to Iran via Dubai. Modanlo is an Iranian-American satellite company entrepreneur serving an eight-year sentence after being convicted in 2013 of conspiring with Russian officials to advance an Iranian satellite project.

Golestaneh, a 30-year-old Iranian university student, pled guilty in December to federal charges of hacking into the computer system of a Vermont aerodynamics firm. He was extradited to the United States by Turkey in February on charges of cyber hacking.

Afghahi, 72, a dual Iranian-American citizen, was indicted in the case that charged Mechanic with exporting $24 million worth of electronic equipment to Iran. Faridi is Mechanic's nephew and was indicted in the same case, but he was free on bail ahead of trial.