President Barack Obama heralds his administration’s multichannel diplomacy with Iran for freeing detained Americans and implementing the nuclear deal and says there is an "opportunity" to pursue a new path with Iran. 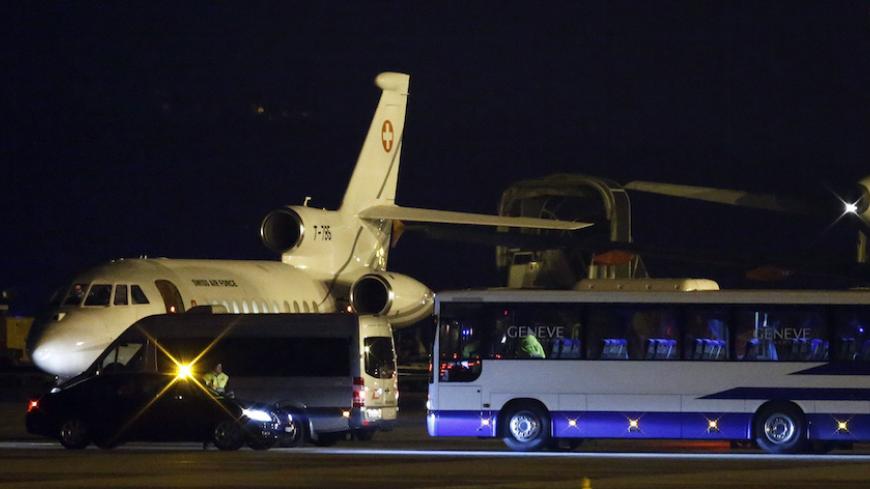 A bus and a van are parked in front of a plane carrying three Iranian-Americans, who left Tehran under a prisoner swap, after it landed at Cointrin airport in Geneva, Switzerland Jan. 17, 2016. - REUTERS/Denis Balibouse

The presidents of Iran and the United States on Jan. 17 celebrated a mutual diplomatic victory that accomplishes key goals for both governments — long-term limitations on Iran’s ability to make a nuclear weapon in return for the Islamic Republic’s re-entry into the global marketplace.

Both Barack Obama and Hassan Rouhani were careful not to claim an end to US-Iran differences over issues ranging from Iran’s intervention in regional conflicts to its treatment of domestic opponents. But the sense of mutual accomplishment was striking in their remarks, which appeared timed to allow audiences in both the United States and Iran to watch them in tandem.

Rouhani, speaking first at a press conference in Tehran, declared, “Today is the beginning of a new era, a new chapter [for Iran] with the region and the world.”

He listed the benefits of sanctions removal for Iran’s trade and investment, its oil and gas exports and banking, including the fact that 1,000 letters of credit were opened for Iranian banks just one day after the nuclear deal went into full force.

Rouhani also tried to reassure Iran’s regional adversaries that Iran would not use the added resources it will receive — including an estimated $50 billion in unfrozen assets in foreign banks — for hostile purposes. “Our country has a big power called the power of diplomacy,” he said.

Not long after, Obama addressed Americans — and Iranians — in a rare Sunday appearance. Obama heralded his administration’s pursuit of diplomacy, too, for solving difficult issues and suggested it could lay the groundwork for expanded US-Iran ties in the future.

“We have a rare chance to pursue a new path — a different, better future that delivers progress for both our peoples and the wider world,” Obama said in remarks in the White House Cabinet Room. “That’s the opportunity before the Iranian people. We need to take advantage of that.”

“I am hopeful that this signals the opportunity at least for Iran to work more cooperatively with nations around the world to advance their interests and the interests of people who are looking for peace and security for their families,” Obama said.

Where Rouhani had listed the economic benefits to Iran of the nuclear deal, Obama focused on the nonproliferation gains, which he said would ensure that “Iran will not get its hands on a nuclear bomb.” Iran has taken a series of steps that push out to more than a year the time it would take to produce enough nuclear material for a nuclear weapon. It has also agreed to an intrusive inspection system that would make it very difficult, Obama said, for it to try to build a bomb covertly.

Obama delayed his remarks until after the US government received confirmation that a Swiss plane carrying three freed Iranian-Americans — Washington Post correspondent Jason Rezaian, pastor Saeed Abedini and former US Marine Amir Hekmati — had departed Iran. Their departure had been expected on Jan. 16, but had been delayed to ensure that Rezaian’s wife, Iranian journalist Yeganeh Salehi, and his mother, Mary, could fly out on the same plane with him, Secretary of State John Kerry told journalists en route back to Washington from Vienna.

A fourth freed Iranian-American, Nosratollah Khosravi-Roodsari, had apparently decided not to leave Iran yet. A fifth American, Matthew Trevithick, who was detained in Iran in November while attending a four-month intensive Persian language program, flew out of Iran on a civilian airline Jan. 16, US officials said.

In return for their release, the United States gave clemency to six Iranian-Americans and an Iranian jailed for sanctions violations, and agreed not to seek the extradition of 14 other Iranians abroad wanted for similar, nonviolent offenses. Obama called this a “one-time gesture” to Iran that benefited from the diplomatic channels opened by the nuclear talks.

The releases of the detained US and Iranian citizens were the result of a secret, second diplomatic channel launched 14 months ago and led on the US side by Brett McGurk, Obama’s special envoy on countering the Islamic State, US officials said. McGurk met with an Iranian intelligence official and other nondiplomatic Iranian representatives in secret meetings hosted by the Swiss government, US officials said. Those discussions intensified after the nuclear deal was reached last summer and the two sides were able to winnow down the list of Iranians whose release Iran was seeking. The United States only agreed to grant clemency to Iranians convicted of nonviolent offenses, US officials said.

“What happened today in getting American citizens home, for being able to do this, [involved talking] with elements of the Iranian system we don’t normally engage with,” a senior Obama administration official, speaking not for attribution, told journalists on a White House call Jan. 17 about the McGurk channel on humanitarian detainee releases.

“We were dealing with different parts of the Iranian system” than Iranian diplomats, a second US official said, apparently referring to elements of Iranian intelligence and security apparatus.

In addition, Obama said, the United States had resolved a decades-old dispute with Iran over American weapons paid for by the Shah of Iran and not delivered after the 1979 Iranian revolution.

The State Department said Iran would receive $400 million left in a trust fund plus $1.3 billion in interest. A senior US official asserted later in the background call with reporters that Iran “was seeking billions of dollars” more and suggested that it was better to resolve the matter now rather than waiting for more interest charges to build up. Over the years, he said, Iran has paid more than $2.5 billion to settle 4,700 private US claims filed against the Iranian government.

“So, nuclear deal implemented. American families reunited,” Obama said. “With the nuclear deal done, prisoners released, the time was right to resolve this dispute as well.”

Obama also announced new sanctions against Iranian individuals and entities over its ballistic missile program — sanctions that had been widely anticipated but were postponed so as not to interfere with Iran’s implementation of the nuclear deal or its release of the jailed Americans.

Taken together, the developments of the past few days — including the rapid release of 10 American sailors who strayed into Iranian waters — are almost breathtaking in scope but could be undermined by political developments in both countries.

In Iran, the Guardian Council, a body that vets candidates for elected office, has disqualified a large number of Reformists from running for parliament in elections due at the end of February. Asked about this at a press conference, Rouhani suggested that he would try to persuade the council to reconsider.

In the United States, Republican presidential candidates — who uniformly oppose the nuclear deal — harshly criticized Obama for agreeing to a prisoner exchange.

A senior US official, speaking to reporters after Obama’s remarks, expressed frustration about the criticism. He said the Republican candidates should be asked, “Do you want to leave these Americans in prison?” The official also said the exchange was not a “swap” — a term used when spies are exchanged — but “releases undertaken by each side on a humanitarian basis. ... This was our opportunity to bring them home.”

Clearly, dynamics between the United States and Iran have changed under the Obama and Rouhani administrations. The senior US official noted that the two countries have had more diplomatic engagement in the past two years than they have had since the Iranian revolution, adding that when Mahmoud Ahmadinejad was Iran’s president, the United States “did not have constructive engagement at all about nuclear issues or anything else.”

Asked by Al-Monitor whether these channels could be institutionalized to continue when Obama is no longer president, the official conceded that “we’re obviously not opening diplomatic relations” in the way the United States has recently done with Cuba.

He said it would be “up to the next [US] administration how they want to carry this forward” and progress would also depend on Iran’s attitude. “The choice is even more on the Iranian side than our side,” the official said.