US officials say there is no equivalence between Americans detained in Iran and Iranians jailed in the United States, and that the issue is separate from slow-moving nuclear talks. 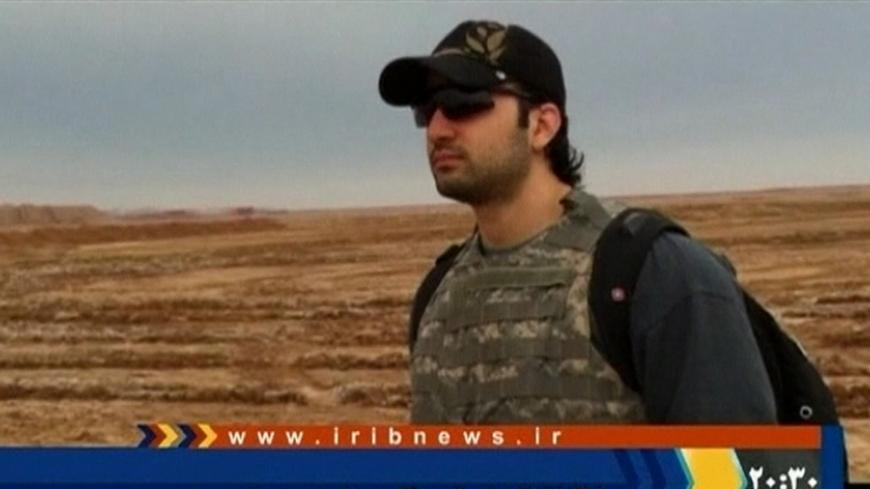 Iranian-American Amir Mirza Hekmati, whose death sentence from Iran's Revolutionary Court on charges of spying for the CIA was commuted to 10 years in prison, stands in an undisclosed location in this undated still image from a video made available to Reuters TV on Jan. 9, 2012. - REUTERS

There are numerous theories about why Iran keeps jailing Iranian-Americans, including hard-line efforts to undercut the administration of President Hassan Rouhani. Another motive, however, has been clear at least since the days of Rouhani's predecessor: seeking to trade detainees for Iranians in US custody.

Last week, the family of Amir Hekmati, an Iranian-American ex-Marine imprisoned in Iran since visiting relatives there in 2011, released a letter sent by Hekmati to Rouhani. “For the past three years, my family has been receiving emails and phone calls from individuals in Iran proposing prisoner exchanges, going so far as asking my family to lobby publicly for the release of these individuals,” the letter said.

A spokesman for the Hekmatis would not divulge the names of these Iranian individuals. Asked for a list of current Iranian prisoners in the United States and whether Iran was demanding their freedom in exchange for the detainees in Iran, a spokesman for Iran’s UN mission did not respond.

Iran in the past has sought the return of Ali Reza Asgari, a retired Islamic Revolutionary Guards Corps general who disappeared in Turkey in 2006 and is said to have defected to the United States. Another Iranian of interest to Tehran, merchant Mohsen Afrasiabi, disappeared in Germany several years ago.

Other Iranians whose release has been requested by the Islamic Republic have been convicted of illegally exporting materials to Iran connected to its nuclear program or with dual civilian and military uses.

US officials reject any equivalence between what they regard as innocent Americans and Iranians convicted of crimes. However, Fattahi, jailed for conspiracy to export American-made military aircraft parts to Iran, was released in 2011, according to the US Department of Justice. Kashari, convicted of the same charge, was also freed in 2011. Yadegari, jailed in Canada following a joint US-Canadian investigation into charges he tried to send nuclear technology to Iran, finished his sentence last year. In response to a query, the US Justice Department said it had no information about Amir-Qolikhani or Nazmi.

Amiri, a nuclear scientist, disappeared in Mecca in 2009 and defected to the United States but had a change of heart and returned home in 2010, initially to a hero’s welcome. He has since been jailed, according to Hadi Ghaemi, executive director of the International Campaign for Human Rights in Iran.

Ghaemi told Al-Monitor that the Iranian security establishment’s desire to gain access to Iranians who have assisted Iran’s nuclear and weapons programs may explain in part why it has been so hard to secure the release of individuals such as Hekmati and Jason Rezaian, a Washington Post correspondent and dual national who was arrested six months ago.

Officials from the civilian side of Iran’s government “have all been indicating that they are trying to resolve Jason’s case but always there is pushback,” Ghaemi said.

Iranian news reports last week said that Rezaian has been indicted on unspecified charges and that his case has been sent to Tehran’s Revolutionary Court for processing. Ghaemi said Rezaian is in a special wing of Evin prison controlled by the Revolutionary Guards.

Jason’s mother, Mary Rezaian, who has traveled to Iran to see her son in prison, told Al-Monitor in an email that a prisoner swap “was never discussed when I met with officials in Iran in recent weeks” but that such reports “could be part of the ongoing mental anguish captors weigh on prisoners.”

Haleh Esfandiari, a prominent Iranian-American academic who was incarcerated in Evin for four months in 2007, told Al-Monitor that interrogators at the start of her imprisonment mentioned five Quds Force officers seized by the US military in Iraqi Kurdistan earlier that year during the height of US military intervention in Iraq.

“They said, 'You know, of course, they [the Americans] have five of our people,’” Esfandiari, who directs the Middle East program at the Woodrow Wilson International Center for Scholars, said her interrogators remarked. “I immediately interrupted them and said, ‘You are hinting and hoping for a swap. Forget about it because I’m not an important person for them [the US government].’ They didn’t raise it again.”

Three of the officers remained in US custody until 2009, when they were transferred to Iraqi control and allowed to return to Iran. Esfandiari was released in September 2007 after an international uproar over her imprisonment.

The US government never disclosed any evidence linking the seized Quds Force officers to anti-US acts in Iraq. The officers — said by the Kurds to have been carrying out diplomatic duties in Erbil at the time of their arrest — appear to have been held by the US in part as leverage to pressure Iran to scale back attacks on US forces by Iran-backed Iraqi militias.

Esfandiari said that Iran, in its apparently continuing attempt to trade American detainees for Iranians jailed in the United States, may have been “emboldened by the swap on Cuba” of convicted Cuban spies for an American intelligence agent in Cuba. A US aid worker, Alan Gross, was also freed late last year under a deal that eased the US trade embargo against Cuba and re-established full diplomatic relations.

A State Department official, speaking on condition of anonymity, referred Al-Monitor to the Iranian government on the question of whether Iran was seeking a swap for detained Americans.

The US official also said there was no connection between slow-moving nuclear negotiations and US efforts to gain the release of Rezaian, Hekmati and Saeed Abedini — a Christian pastor arrested in 2010 — and to learn the whereabouts of Robert Levinson, a former officer who disappeared from Iran’s Kish Island in 2007.

“We have been clear that our discussions with Iran about our concerns over Mr. Rezaian, Mr. Hekmati, Mr. Abedini and Mr. Levinson are a separate issue,” the State Department official said. “The P5+1 [five permanent members of the UN Security Council plus Germany] negotiations are related strictly to Iran’s nuclear program and the importance of Iran bringing that nuclear program into compliance with their international obligations. These US citizens should be returned to their families independently of political negotiations with Iran; their freedom should not be tied to the outcome of these negotiations.”

US officials raise the four cases with Iranian officials whenever they hold bilateral talks in connection with the nuclear negotiations. Secretary of State John Kerry did so when he met Iranian Foreign Minister Javad Zarif last week.

Ghaemi urged that attention be paid to a fifth case, that of Omid Kokabee, 33, a postdoctoral physics student at the University of Texas at Austin, who was arrested on Jan. 30, 2011, when he was about to depart from the international airport in Tehran after visiting his family.

According to Ghaemi, Kokabee — who is not a US citizen — was held for 15 months before trial, convicted of “contact with enemy states” and sentenced in 2012 to 10 years in prison. Kokabee wrote in an open letter from Evin in 2013 that he was arrested after refusing to cooperate on a military research project. Earlier this month, a Tehran appeals court upheld the sentence even though a branch of Iran’s Supreme Court had reviewed the case and ruled that there was no evidence to back up the charges.