Iran denies US gave money in exchange for prisoners

The spokesman for Iran's Foreign Ministry has denied accusations by conservative figures and media that the prisoner swap in January was related to the release of $1.7 billion. 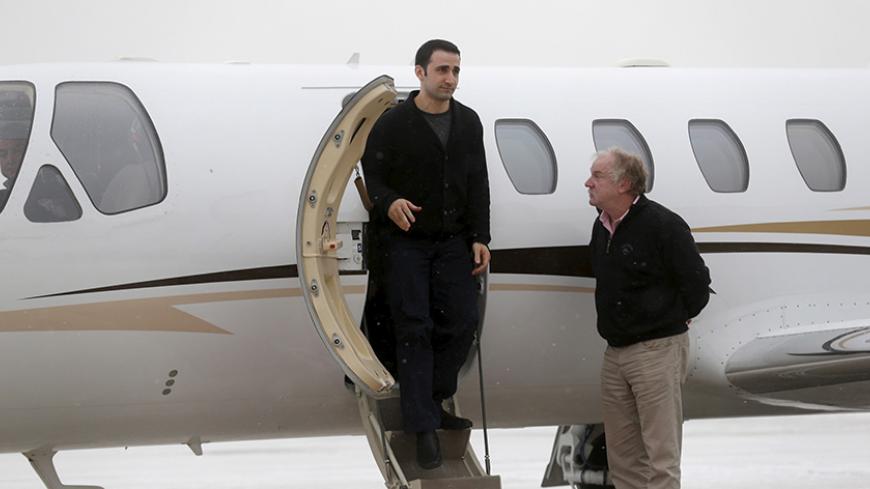 Former US Marine Amir Hekmati, recently released from an Iranian prison, steps out of the plane piloted by Mike Karnowski (R) as he arrives at an airport in Flint, Michigan, Jan. 21, 2016. - REUTERS/Rebecca Cook
Arash Karami
@@thekarami
February 17, 2016

“Today, the enemy has agents of infiltration,” Naghdi said at a gathering of religious singers. According to Naghdi, one of the agents of infiltration was Washington Post reporter Jason Rezaian, who was accused of spying for the United States and was released along with three other Iranian-Americans also held in Iran. Naghdi suggested the United States was so determined to infiltrate Iran that it “is ready even to give back $1.7 billion of blocked money in return for Jason Rezaian.”

Naghdi’s accusation that Rezaian was so crucial to the United States that it exchanged $1.7 billion for him was even picked up in American media. On Jan. 21, The Wall Street Journal reported that the US Treasury Department wired the amount “around the same time” as the Iranian-Americans were released. The White House denied the payment was a ransom and said that Iran was given its own funds back that were blocked after the 1979 Islamic Revolution. The previous Iranian government had paid the United States $400 million for arms. An additional $1.3 billion was added as interest.

With the Feb. 26 parliamentary and Assembly of Experts elections approaching, the central focus in the prisoner swap is now the $1.7 billion figure that was first introduced by Naghdi.

Harandi said that some agents of infiltration come into Iran under the guise of being reporters and are able to have access to sensitive institutions in the country. Harandi repeated the claim that Rezaian was so significant for the United States that it paid $1.7 billion in exchange for him. He also claimed that Rezaian was the main person the United States wanted in the prisoner exchange.

On accusations that Rezaian was an agent of infiltration, Ashna responded that the contents of his conviction were never made public and that much of the commentary on his case is based on a report of accusations given to parliament. Ashna continued by saying that if it could be proven that Rezaian had secret information or influence in certain decision-making bodies and this was proven in court and he was convicted of it, "the issue would become interesting." However, so far the reported conviction has not been shown to the public.

Ashna also questioned Harandi’s accusation that Rezaian was the main interest of the United States in the prisoner exchange or the blocked money was returned in exchange for him. He also said that the term “infiltration” has become a partisan game.

In a video report titled “The exchange of four American spies,” Tasnim News Agency also addressed Rezaian’s case and the exchange of money. The report said that as Iranian and European officials were announcing the implementation of the nuclear deal, the release of the prisoners was taking place. The report claimed that the United States demanded that the details of the prisoner exchange not be released and had even threatened to delay implementation of the nuclear deal if it was.

The report drew a comparison to the US Embassy hostage crisis when 52 Americans were released after 444 days as Ronald Reagan was sworn into office, denying President Jimmy Carter credit for the release. The report said that President Barack Obama, learning from Carter’s failure, was determined to have the prisoners released before the elections and keep quiet the details of the prisoner swap. According to the video, Iran had sought the release of seven Iranians, removal of 16 Iranians from sanctions list, release of $1.7 billion and removal of Bank Sepah from the sanctions list. The report said that $400 million was delivered to Iran in cash Jan. 17 at Mehrabad airport.

At a press conference Feb. 16 in response to the Tasnim report, a spokesman for Iran’s Foreign Ministry, Hossein Jaberi Ansari, denied that the unblocked money had any relation to the prisoner swap.