How US cash payments story played out in Iran

While Washington’s $1.7 billion payment to Iran caused controversy in the US, it was a non-story in Iran. 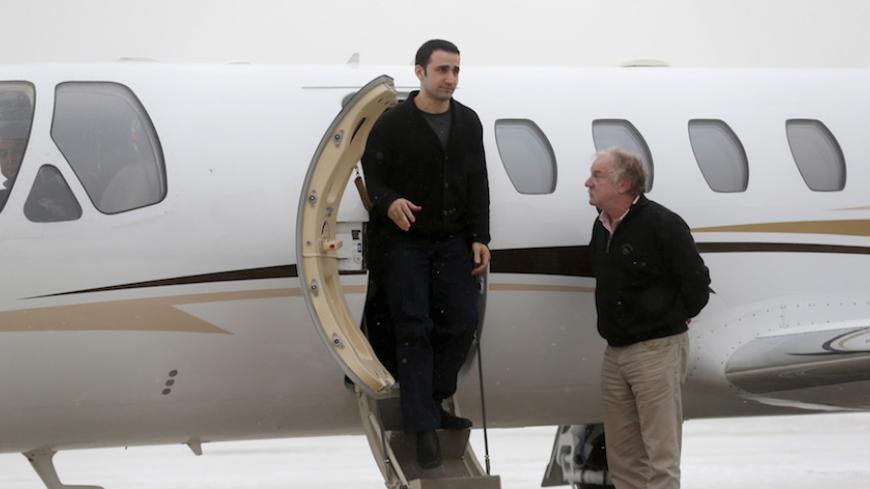 Former US Marine Amir Hekmati, recently released from an Iranian prison, steps out of the plane piloted by Mike Karnowski (R) as he arrives at an airport in Flint, Michigan, Jan. 21, 2016. - REUTERS/Rebecca Cook
Arash Karami
@@thekarami
September 8, 2016

Recent revelations that the Barack Obama administration paid Iran $1.7 billion in cash just as four American-Iranians were released in January have caused a Republican furor in Washington. In Tehran, by contrast, all political factions seem to agree that the settlement over a decades-old unfulfilled arms deal was a great deal — for Iran.

Iranian hard-liners have long voiced Republican claims that the payments were, in effect, ransom. President Hassan Rouhani and his allies for their part have pointed to the payments as proof that engagement with the United States is paying dividends. No one in Tehran seems to share the State Department's stated view that Iran was well positioned to get a lot more if negotiations at the Iran-US Claims Tribunal in The Hague had dragged on.

At the time that the Americans were released, conservative figures in Iran added to the impression that the payment was tied to their release. The head of Iran’s Basij organization, Brig. Gen. Mohammad Reza Naghdi, said that the United States was so intent on “infiltrating” Iran that it was ready to give back $1.7 billion of the country’s money. Naghdi’s argument suggests that the Iranian-Americans arrested were actually agents of infiltration sent by the United States in order to influence Iranian society and decision-making centers in the country.

Mohammad-Hossein Saffar-Harandi, culture minister when Mahmoud Ahmadinejad was president, also reiterated the claim that the $1.7 billion was given to Iran in exchange for the release of prisoners during a live television debate with Rouhani’s media adviser, Hesam al-Din Ashna.

A video report by Tasnim News Agency titled “The Exchange of Four American Spies” also covered the payment of the settlement. The report claimed that negotiations over the release of prisoners were done quietly at the orders of the United States, given the bitter history of former Democratic President Jimmy Carter's failed hostage negotiations.

The video claimed that Iran’s conditions for the release of the Iranian-Americans were the release of Iranians held in the United States for sanctions violations, the removal of a number of individuals from the list of sanctions violators and the payment of $1.7 billion. The video claimed that the United States had asked that the details of the deal be kept quiet in consideration of the upcoming presidential election. Most striking, the video showed pallets of cash sitting on airplanes.

Members of the Rouhani administration have been keen to stress that the payment — much like the nuclear deal — was the result of productive negotiations.

In January, Mohammad Javad Zarif, Iran’s foreign minister, said that the release of the prisoners was the result of parallel negotiations and coincidentally was agreed to at the same time as the implementation of the nuclear deal. On the settlement over the sales of arms, Zarif said it was possible that if Iran did not use this opportunity to resolve the dispute, it could have dragged on much longer. He added that this has been an issue that has remained unresolved for 37 years.

The previous government of Iran, under the leadership of Mohammad Reza Shah, who had good relations with the United States and the West, gave $400 million to the United States for the purchase of fighter jets. However, after the 1979 Islamic Revolution and the attack on the US Embassy in Tehran, which resulted in the taking of US hostages for over a year, relations between the two countries were severed and the arms were never shipped to Iran.