The secretary of Iran's Supreme National Security Council said Republicans reached out to Iran to delay the prisoner swap until the US presidential elections. 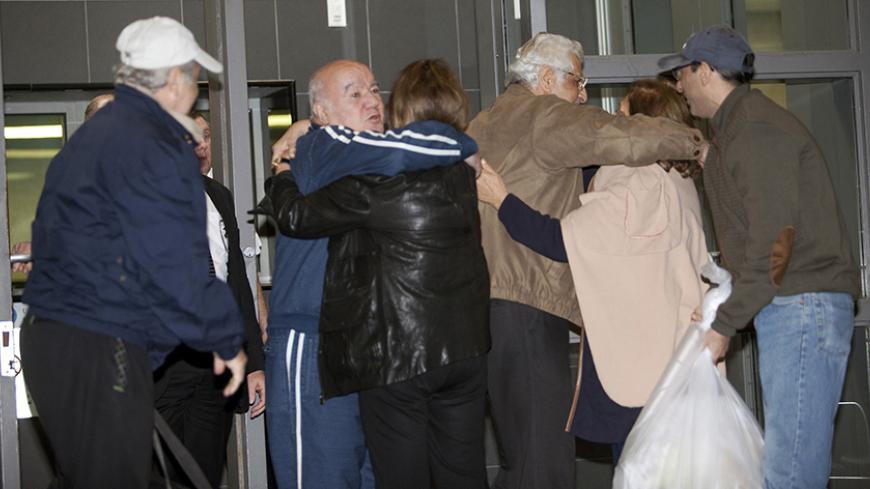 Family and friends embrace several Iranian-Americans who were released under a prisoner swap, at the Federal Detention Center in Houston, Texas, Jan. 17, 2016. - REUTERS/Daniel Kramer

The secretary of Iran’s Supreme National Security Council, Ali Shamkhani, said that Republicans in the United States had contacted Iran and asked it to push back the prisoner swap between the two countries until the US presidential election.

In January, Iran released four Iranian-Americans held in the country for various charges in exchange for seven individuals held in the United States for violating sanctions laws. The prisoner swap was the result of yearslong secret negotiations between Iran and the Obama administration that was reportedly accelerated after the landmark nuclear deal.

Shamkhani, who made the statement about the prisoner swap at a rally for the anniversary of the 1979 Islamic Revolution, was attempting to draw a comparison between the Islamic Republic of Iran and the pre-revolution government before the revolution, which he accused of having a policy of “capitulation.”

Shamkhani said, “On the topic of the prisoner swap between Iran and America, we showed that we will not be influenced by any type of pressure or be put under any type of foreign or domestic scenarios and we will firmly confront spies and penetrators.”

Two of the Iranian-Americans held, Jason Rezaian, a Washington Post reporter in Tehran, and Amir Hekmati, a former US Marine who was visiting family when detained, were both accused of spying.

According to Shamkhani, the prisoner swap deal took place because “this act was the result of a humanitarian approach and the request of their families and based on securing national interests and the freedom of our compatriots in America.” The majority of the Iranians released in the United States are US citizens and were residents of the United States before their arrests. Most of them have chosen to remain in the United States.

Shamkhani’s most startling claim was that “during the talks on the prisoner swap, the Republican rivals of the current American administration, who claim they are humanitarians and support human rights, gave us a message to not free these individuals and delay the process until the eve of the presidential election.” He added, “But we pushed the process on our own independent will.”

Shamkhani did not offer any more information on his claim that Republicans pushed to have the prisoner-swap delayed or how the message was sent. The release of Americans held by Iran was tied to a US presidential election once before: In 1981, just minutes after Ronald Reagan took over from Jimmy Carter, Iran released 52 Americans who had been taken hostage from the US Embassy in Tehran and held for 444 days.

While the US election is nine months away, Iran has its own parliamentary and Assembly of Experts elections in two weeks. At a rally for the anniversary of the revolution in Tehran, President Hassan Rouhani said they would be “fateful elections.”

As usual with the anniversary rallies in commemoration of the revolution, which is called “22 Bahman” in Iran, there was a sideshow to the rallies. This year, the head of Iran’s Islamic Revolutionary Guard Corps Quds Force, Qassem Soleimani, was seen. Rumors of his death or injury in Syria were circulated widely by opposition media. There was also a re-enactment of the capture of American sailors by IRGC naval forces in the Persian Gulf.