Alawites find their voice against Assad

Alawites in Syria are protesting the rise in fuel prices as criticism of the regime and its policies becomes more common and open. 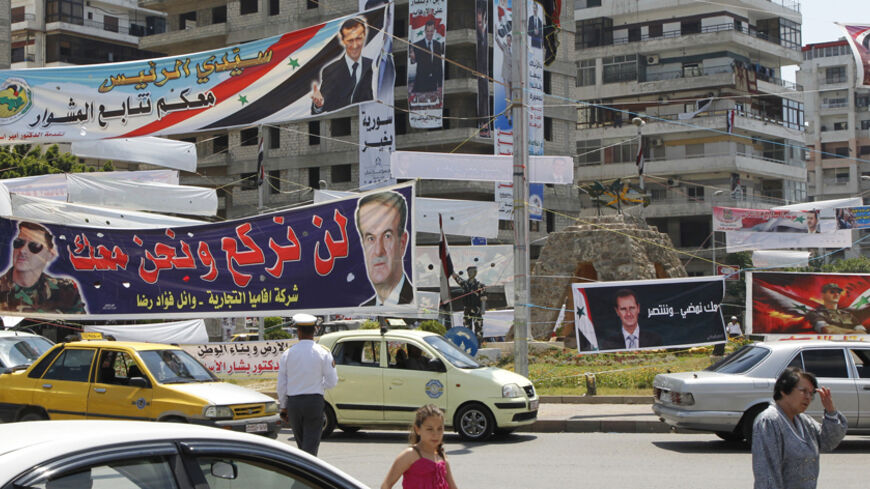 Campaign posters of Syria's President Bashar al-Assad hang along a street and on buildings in Latakia, May 24, 2014. - REUTERS/Khaled al-Hariri

A correspondent in Damascus
October 29, 2014

TARTUS, Syria — Ever since hundreds of Alawite soldiers lost their lives in battles with the Islamic State (IS) in Raqqa and its countryside in July and August, anger and discontent has simmered. A massive protest followed in Homs, against the Oct. 2 terrorist attack that killed dozens of children in the mostly Alawite neighborhood of Akrama. Then the rise in fuel prices triggered protests in Tartus. While many parties consider these incidents collective Alawite rage that might lead to an Alawite revolution against the Syrian regime, there are more forces at play.

On the morning of Oct. 15, Al-Monitor witnessed several public minibus drivers gather in the new Tartus parking lot on a strike, and demonstrate there for an hour. About 11:30 a.m., they escalated their strike, and several of them parked in the surroundings of Al-Bassel garden, close to the municipality building in the city center, and stood in front of the building. Their complaints included the increase in the tariff from 15 Syrian pounds (9 cents) to 20 (12 cents), following the fuel price hike. This is not the first time that taxi drivers have protested the tariff in Tartus, and they have often gone on strike in the past. But this time was different, as they raised their voices and dared to protest openly in the streets. The news media reported on an anti-regime protest in Tartus and about arrests and oppression by security forces that day. Yet, not one person in Tartus told Al-Monitor they witnessed a protest against President Bashar al-Assad, and no one could name any of the alleged arrestees.

An employee in the Tartus City Council told Al-Monitor on condition of anonymity, “We were very surprised to hear about a protest against the regime in Tartus. It is true that the strike was exceptional and marked by anger, but the strikers were in front of the city hall building and they did not shout any anti-regime slogans. They even cheered for Assad when the security forces and policemen gathered around them. The governor warmly welcomed one of the strikers and promised to solve the problem, which evidently has not been solved yet. The tariff has not been increased to avoid angering the other citizens. But I wonder where the talk about an anti-regime protest in Tartus came from.”

In Tartus, there is a public minibus crisis, as the buses are scarce and service is limited. A person can wait a long time at off-peak hours for a bus that is not overcrowded. At other times, one might not find a bus at all, because most drivers only work during rush hours, when riders are going to work or returning home.

One driver told Al-Monitor, “The municipality is messing with us. We are taking 20 pounds from passengers without the approval of the parties concerned, but when passengers insist on paying the old tariff of 15 pounds, we cannot do much. It is not only about the rise in fuel prices, but also its unavailability. I wait for seven hours or sometimes more at the gas station to fill up my vehicle. Many drivers have stopped working completely. What is even more devastating is that fuel is available on the black market at prices that are much lower than the official tariff. The Syrian government is packed with thieves.”

The pro-regime citizens in Tartus also seem angry. Everyone in the city is talking about the fuel price hike and the subsequent increase in the prices of products, while the minimum wage is still the same. People are saying, “We can’t take it anymore,” “We are going to starve if things continue this way” and “Our fellow citizens are dying at war in vain.” The poverty and ongoing war have started a wave of rage, but might this lead to rebellion against Assad’s regime?

About 90 kilometers (56 miles) north of Tartus, Latakia city seems more vibrant. Its streets are crowded, especially near Tishreen University at the city's south entrance, where dozens of buses of varying sizes park, ready to transport students. It seems that there is no fuel or transport crisis there.

In Latakia, life seems normal in the markets and on the roads, except for the presence of dozens of armed men affiliated with the army and the National Defense Forces. An engineer told Al-Monitor on condition of anonymity for security reasons, “The situation in Latakia has not changed, despite the anger among Alawites, but talk about a possible revolution against Assad indicates a complete ignorance of the facts. There are no direct protests against the Syrian regime, but some Alawites let out angry cheers and intermittent cries when gathering to receive the bodies of their relatives or sons at the military hospitals.”

The pro-regime militants in the city streets, especially at the entrance of the mostly Sunni neighborhoods, which have already witnessed clashes and protests, are intimidating. Sand barricades can still be seen at the entrances of the streets leading to the neighborhoods of Al Ramel al-Janoubi, Qnaines and al-Sakantouri. The regime, with the support of its advocates, is still tightening the noose on the city.

What have the Alawites' complaints changed?

“Well, at the onset of the revolution, I could not criticize the regime or Assad," the engineer said. "But today, I can do that without being labeled as pro-revolution. For me, nothing has changed, though. Most Alawites still believe that their main enemies are the rebels and the opposition members, be they secular or Islamists. But they are gradually losing faith in the regime, and they seem more at peace with the open criticism of the regime. The deteriorating economic and security situations and the failure to settle the war are to blame.”

In Syria, both pro- and anti-regime citizens are equally devastated by the war. We can say that the Alawites’ protests against the regime mainly stem from its mismanagement of the war. Others' protests center on demands stirred by the price increases and economic deterioration. The regime has managed until now to control these protests and avoid their escalation, as the photos of Assad and slogans supporting him in the streets of Latakia and Tartus show.