Ali Hashem reports from Damascus on Syria’s Alawite community and the sectarian conflict there. 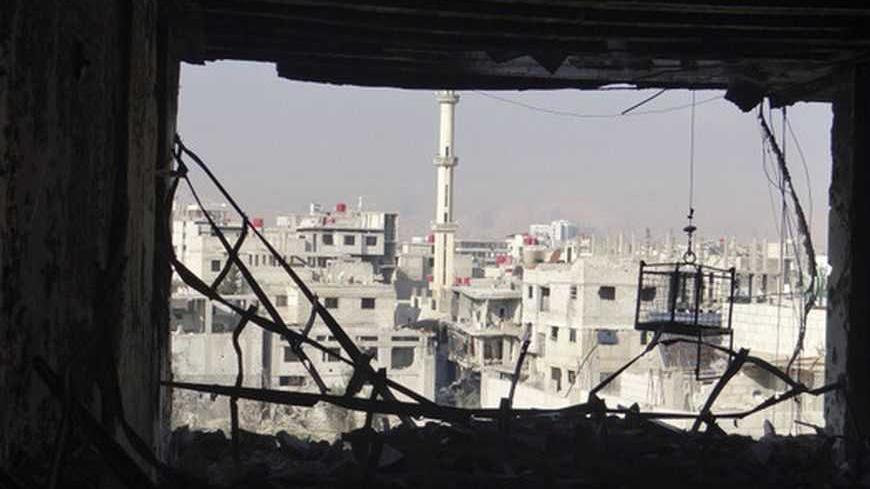 View of buildings damaged by what activists said was shelling by Syrian forces loyal to President Bashar al-Assad in Erbeen, near Damascus, on Dec. 31, 2012. - REUTERS/Bassam Al-Erbeeni/Shaam News Network

Having dinner in one of Damascus' trendy restaurants might give the feeling that Syria is calm, and all the news circulating here and there are baseless rumors. Tables are fully booked, people from different areas and various sectarian backgrounds are sitting together and sharing the same food; smiley faces refute all claims that Syria is in the midst of a bloody civil war, till the sound of artillery shakes the place and uproots all feelings of safety and peace.

In the capital of Syria people in mixed, poor neighborhoods are living nightmares; they know that their best days are behind, and what is to come is much more dangerous than all that they are going through nowadays.

Al-Tadamon is one of Damascus' hot flashpoints; the area is divided into three main streets, an Alawite, a Druze, and a Sunni.

The neighborhood is surrounded with four other flashpoints, making it a hub for the Free Syrian Army, a reality that forced Alawites to flee toward safer areas in the capital or to their coastal strongholds in Tortuous and Lattakiya.

Some of those complain they are victims of both the regime and the opposition equally; they have to survive the fiasco of the bombardment and later on the revenge of the rebels, and even those of them who oppose the regime are paying the price of sharing the same sectarian background with the Assad dynasty.

I had the chance to move around the adjacent neighborhood of "Hajar Alaswad." All the walls and shop doors had anti-regime writings, both the municipality building and police station were set on fire, activists drew on the police station's fence the Syrian revolution flag. I made my way into the building and read more inside, "Down with Bashar," read one; “Freedom or else we burn the Alawites," read another.

Dalia, a teacher from Al-Qadam, another Damascus neighborhood, decided to leave her birthplace for good, as “life here is unbearable we are in danger of being killed at any time." She officially requested to be transferred to a school in her village.

"I want to live in peace. I can't take it anymore. I don't really care who prevails," she added.

People around the neighborhood are dismayed with the daily bombing of their area.  Most of the Sunnis there support the FSA; a child in the street told us "they were here during the past weeks, they were nice, they even let a police officer leave after knowing he have no blood on his hands." His father interrupted him, saying "Let us cut it short. FSA are the army of the Sunnis and we don't want the Alawites to rule us anymore! Let them go, we don't want them here."

Such rhetoric is getting common among lower-class Sunnis. They feel they were oppressed for the past 40 years, and it’s time to take over.

"Masaken Barzeh" is a middle-class suburb; clashes took place here when the rebels attacked Damascus. Rouba is an Alawite resident who lives with her mother and sister there: "I know not anywhere but here as my home, we don't know where to go." She is still at her flat but neighbors had to lie to militants when they asked if she was Alawite, "They came to the building for us, but when all the neighbors denied we are Alawite, they left, but who knows when will they come back," she added. "The army succeeded this time in pushing them out but they are still around."

The most dangerous incident was the assassination of Bassam Hussein, an Alawite movie director. He was killed at his place in the mixed neighborhood of Jdeidet Artouz by unknown militants, the incident came to fuel concerns within the ruling minority that an act of sectarian cleansing might be on the way in a country hit by civil war that seem uncontrollable to many.

According to Zaidon Alzoabi, an opposition activist, “The regime holds part of the responsibility for the sectarian incitement. They took the Alawites as human shields and gave them the impression that the revolution is against them,” he added. “But the bigger amount of incitement that happened on both sides is to be blamed on the media side, Addounia, Aljazeera, and Alarabiya. They are playing a dirty role in this.”

Zaidon is a cousin of Assad’s deputy, Farouk Alsharea, and a son of a former MP, and as I write these words he is under arrest in one of the regime’s intelligence branches in Damascus, along with a brother.

I didn't have the chance to visit the west coast of Syria, the home to more than 4 million Alawites, but managed to enter their Damascus stronghold at "Mazzeh86."

Pictures of Syrian President Bashar Assad dominate the scene along with posters for both the president's father, late president Hafez Assad, and  brother Maher; Lebanese Hezbollah leader Sayyed Hassan Nasrallah was there, too. The area seemed poor and peaceful but was full of checkpoints; I asked for the reason. “We don’t want terrorists to infiltrate and kill our people here,” said Alaa, a pro-Assad activist in the area. “Last week, around 300 militants tried to attack, but our boys taught them a lesson.”

Life at “Mazzeh86” seemed normal. There were no scenes from the crisis as in other neighborhoods, except for people queuing for gas jars. On my way out, I saw a large poster of a young man who was killed in clashes, he was on the army’s side, part of the pro-regime militia. “Shabiha,” according to Alaa. “This is a battle for existence, either we live together or we die together.”

Alawites enjoyed half a century of power in Syria — they are in each and every ministry and barracks — but they know that this won’t continue. Sectarian wars impose certain prices on those who fight it; the heaviest is always paid by minorities, even if they have the power.

A Syrian official told me, on the basis of anonymity, “The best thing that might happen now is federalism.“ He added, “We can’t live together anymore, hatred is much more than we can bear.”

I had to leave Damascus to go back to Beirut. On my way to the borders, there were more checkpoints than the day I arrived. Fear among Syrians grew and many believe Syria isn’t anymore a safe place to be, nor does religion or political motivations make anyone here immune.

The oldest city in history isn’t attractive anymore to tourists. Planes landing in Damascus are either carrying political mediators or war reporters.