One deeply distressing consequence of the Syrian crisis is the increasing number of families breaking up over support for either the FSA or the regime. Divisions emerge in the city and country, among the rich and poor, and few are even aware of the extent to which their lives are affected by national and international geo-politics. 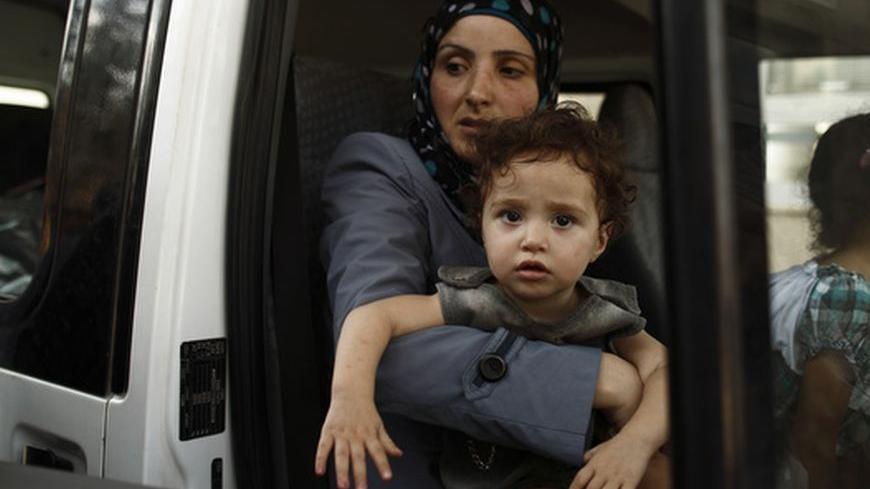 A Syrian woman carries her daughter as the family is about to cross back into Syria at the Turkish Cilvegozu border, opposite the Syrian commercial crossing point Bab al-Hawa, in Reyhanli, Hatay province, July 25, 2012. - REUTERS/Zohra Bensemra
Layla M.
August 19, 2012

DAMASCUS — How many sides to side with in Syria's crisis?

I used to grimace and roll my eyes at talk of sectarianism in Syria. "Everyone lives happily side by side in Syria," I would boast. "All religions, sects and nationalities are welcome — everyone is a Syrian here."

But amidst the drawn battle lines in the sky and on land and in between official army uniforms and the casually dressed Free Syrian Army (FSA) soldiers, differences of religious belief here are now among the least of Syria's worries. Divisions in this ancient country are bred on politics and history, city and country, rich and poor, and few are even aware of the extent to which they are sucked into the dark tunnels of national and international geo-politics.

One deeply distressing consequence of the crisis is the increasing number of family members and couples falling out over support for either the FSA or the regime. "We have forbidden talking about politics at home now because of the fights that would erupt between us,' said Khalid, a 30-year-old single construction-materials supplier living in central Damascus.

The increasingly desperate conflict now pits brother against brother, daughter against mother and cousin against cousin. Families are divided between young and old, male and female. Some support the FSA; others say they'll stand by President Bashar al-Assad's regime to the end. Still others are simply sitting on the fence, hoping for a swift end to the violence one way or another.

Friends and family members often judge one another's take on the conflict by which TV station their friend or relative watches — Al Jazeera and Al Arabiya for the opposition; Syrian State TV, Iran's Press TV and Russia Today for the regime supporters.

Over drinks at a café downtown one evening in late July, Mohammed, a 42-year-old Palestinian journalist raised and living in Damascus, told me he has stopped talking to three of his sisters because they are staunchly pro-Assad. "You can't talk to these people, they just can't understand a life without Assad," Mohammed said. "They are determined that the opposition is a bunch of 'armed terrorists;' they won't listen to logic or even to hard evidence."

One might expect the commonalities of religion and upbringing to unite family members in a civil war that is increasingly becoming sectarian in nature. However, there is a far more complicated and divisive set of factors that govern loyalties in this conflict.

Employment, government connections and personal interest all play a significant part in deciding allegiances and pitting family members against each other. "One of my aunt's husband was a Member of Parliament and my cousin worked for Syrian TV so they are connected with the regime somehow whereas the others aren't so they all have different opinions on this crisis," added Khalid, the construction supplier whose family has stopped discussing the conflict.

Connections to the regime certainly do not always explain the divergence of opinions within families, "My sister has never worked with or for the government and she has her own business and yet she talks and acts as if she is one of them ... ironically, though, it's her that has left the country and me that has stayed," Mohammed said.

Jamila, a widow in her 50s, returned to Syria four years ago after living abroad for most of her adult life. While in Syria, she told me about the pain and difficulty she regularly faced in interacting with her sister, with whom she had always had a close relationship.

"Although my sister is very well-educated and used to be quite critical of the regime, I feel like she has become really ignorant on this conflict and completely blinded by the 'foreign conspiracy' theory put on Syrian and pro-regime TV channels or from people I consider to be really unintelligent and unreliable who call her up with their 'stories' about FSA abuses and Salafists ... She won't listen to or accept any other narrative; even when I tell her that I have seen something with my own eyes or heard stories about regime abuses directly from the victims, she still finds a way of turning it into the FSA's fault and ignoring what I say ... We have had the most fierce fights with each other but we are making a real effort to try and make up afterward because we don't want to lose each other the way I have seen other siblings have," Jamila said.

Whether or not all family members have been equally affected by this conflict — be it displaced, robbed, attacked or caught up in the heavy fighting's crossfire — may have some effect on the commonality of their opinions.

"My house has been damaged from shelling and I am putting up displaced members of my family whereas her children still go to work as normal and she hasn't physically witnessed any of the conflict ... maybe her antipathy toward the uprising and the FSA would change if her own family were affected by the fighting and the regime," Jamila said, opining the reasons for the disparate views of her sister.

The increasingly polarized state of Syrian society has also taken its toll on couples whose relationships carry what might seem like even deeper issues.

Rawad, in his 30s, is from a Sunni upper-middle-class family. His father was once a high-ranking official under the regime. Rawad himself had a close relationship with Assad and his wife but the Syrian uprising and Assad's violent suppression of the initially peaceful protest movement changed all that for him. "I stopped believing in their messages of progress," he explained over Skype in early August.

Rawad made no effort to hide his disappointment by his country's leader and decided to quit his job and leave the country. Soon his disillusionment with politics permeated his personal life when the starkly different opinion on the Syrian crisis held by his boyfriend, Kareem — an Alawite whose father was a low-ranking army officer — began to create cracks in their two-year relationship. "He fully believed the conflict in Syria was part of a 'foreign conspiracy' and was scared that the fall of the regime would inevitably lead to a wiping out of the Alawite population ... it was difficult but as the situation deteriorated we stopped talking about our opinions to each other and when I left to study abroad we decided we would put our differences aside and stay together no matter what because we loved each other."

But even with the best of intentions the couple's commitment could not endure the developments. Rawad returned to Damascus in July amidst the city's furor over the assassinations of regime officials and the heavy fighting and found his boyfriend's vehement allegiance to the regime and their actions too distressing for him to accept.

In the end, it was neither the secrecy of their relationship, the illegality and social unacceptability of their homosexuality, nor the long distance between them that broke them up. Instead, it was their polarized political positions that did it. "He thought the government was doing a good job of cleansing the country and I just couldn't believe someone I loved would think or say such things ... I thought he was better than that," Rawad said, despondently recalling the demise of their relationship soon after his return.

Did Kareem believe love for the regime was more important than the love for his boyfriend? "I don't love the regime but I do feel that its essential for it to remain for the stability and safety of the country ... eventually Rawad will realize the truth and he will come back to me because we still love each other," Kareem explained with hope.

(Editors Note: the author’s identity, and those of her interviewees, have been shortened or changed in order to protect them from possible reprisals.)