The recent intensification of violence in Syria’s two main cities has practically brought commerce to a standstill. Business owners aren’t seeing the profits to inject back into the market; meanwhile, the protracted and dangerous state of Syria’s unrelenting crisis has made those with cash anxious to save it, further freezing economic conditions. 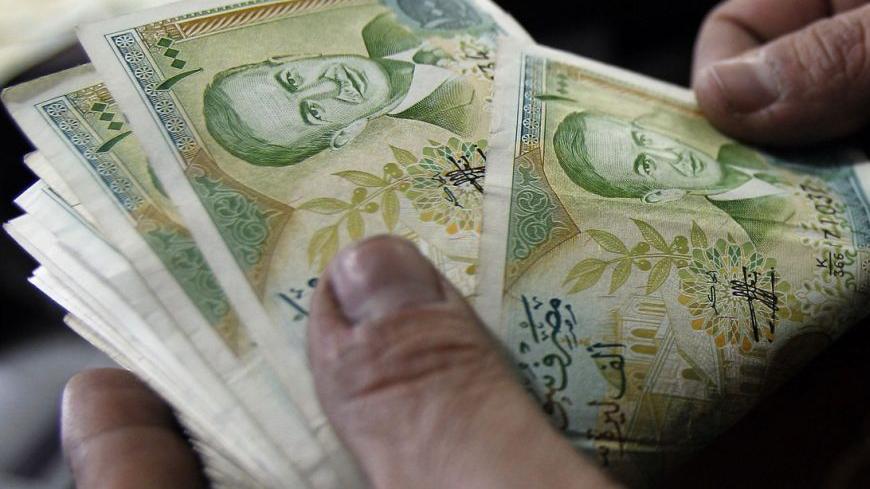 DAMASCUS — Syria’s economy is in tatters after the country’s increasingly violent civil conflict has all but killed off commercial activity. Businesses have seen a steady decline in output during the Syrian uprising, but the recent intensification of violence in the country’s two main cities has practically brought it to a standstill.

“I sit in the shop all day doing nothing,” said Ziad, a 22-year-old employee in a construction company in the hard-hit Midan neighborhood of Damascus. “There is no work because we can’t import any of the primary materials we need nor deliver any of the goods that we have.”

When I visited Marwan, a successful supplier of agriculture machinery, in early July, he had been sitting in his shop in the capital’s Baramke area all day — not to work but rather to escape the boredom and anxiety of sitting at home in Kafr Souseh listening to sporadic gunfire.

“The market is dead and has been for months now,” Marwan said.  “What is the point of importing with the currency so weak if we can’t be sure the goods will even arrive?” He added: "The only people making any money are those who had stockpiles of primary material and who have been able to sell it at an inflated price because nothing new is coming in."

But then there wouldn’t be much of a market for goods even if they were delivered. Many people have lost their jobs – through displacement, redundancy or by taking up arms — and others have had to take financial hits to stay employed.

“I used to work five days a week at one of the duty free shops but they’ve reduced it to two days a week and I took a 70% pay cut,” one suburban resident told me in July.

Business owners aren’t seeing the profits to inject back into the market; meanwhile, the protracted and dangerous state of Syria’s unrelenting crisis has made those with cash anxious to save it, thereby freezing economic conditions further.

During the climatic week in mid-July (when four senior government officials were assassinated and heavy fighting engulfed Damascus) the once bustling merchant capital turned into an empty and shuttered ghost town. Although shops began to reopen the week after the attack, the lack of customers could not belie Syria’s economic stagnation.

And now, despite the welcomed fresh reprieve from the stifling heat of the summer, residents of the capital told me by phone that pedestrian traffic on the streets remains low with almost no commercial activity as regime troops continue to fire artillery and carry out raids and abductions in various parts of Damascus.

Celebrations of the recent Eid al Fitr holiday to mark the end of Ramadan were severely tempered this year and restricted to the visiting of close friends and family’s homes. Eid is typically celebrated with restaurant outings and all-day shopping sprees with children for gifts and sweets but signs offering 50% off on goods — unheard of during religious celebrations — were the only activity at most shop-front windows this year as consumerism remains limited to the life’s absolute essentials: food, cooking gas, water and automobile fuel.

According to residents living in various districts in the capitol, prices of most foodstuffs — except bread — have risen by 20-30% since the beginning of the uprising 17 months ago and soaring by 150-200% during times of intense fighting. The price of a large canister of gas, a staple of every Syrian household, has risen by some 1,300% since March 2011.

Many people have had their homes looted following the onslaught and advance of loyalist troops into certain areas and opposition fighters in others, compounding resident’s financial hardship. Rising unemployment, the proliferation of armed groups — whether they be the shabiha of offshoots from the opposition — and increasing spate of robberies and kidnappings in the country has put the population on edge and kept many people from leaving their homes.

Hisham, a 30-year-old middle-class resident in central Damascus, used to be a self-confessed “party animal,“ who lived largely off his father’s wealth and once owned a downtown boutique. Since the uprising he has begun thinking about his future more seriously. But he is finding increasingly hard to plan.

“My girlfriend wants me to open some kind of business so we can get married and start a family but there is no way I can open anything in this environment,” he said. “I was thinking of leaving the country but the [Central] Bank isn’t letting us withdraw large sums of money from our accounts.”

One former resident of the Damascus suburb of Douma has been looking for a new house to buy or rent, and even though the Central Bank of Syria has assured her she can withdraw her investment bonds she is struggling to find anywhere safe and affordable.

“The unaffected areas are getting more and more expensive but anyway the fighting is spreading everywhere now so you don’t know where is safe,” Leena, a married mother of three, told me last week over the phone from the semi-safe neighborhood of Rawda in Damascus, where she and her family are temporarily living with relatives.

More than 200,000 Syrian refugees have been registered with the UN High Commission for Refugees since the crisis began but the real number of those who have fled would be significantly higher if the unregistered and the wealthier Syrians who left the country to second homes or relatives abroad are also taken into account. Such a large exodus of Syrians from the country takes with it both the capital and demand that the capital’s contracting merchant market desperately needs.

Most of the estimated 40,000 Free Syrian Army fighters and a large proportion of the opposition activists are unemployed, consumed by the fighting and organisation of protests aimed at ousting Syrian President Bashar Al-Assad and felling the regime.

During a trip to the Damascus neighborhood and rebel stronghold of Rikn el Din in mid-July, I sat with some local members of the FSA watching them cut eye and mouth holes into several “umta” — the stretchy cotton material worn by conservative Muslim women under their headscarves as masks — and asked them how they were surviving financially after leaving their jobs and taking up arms.

“Some of us used to be laborers, some worked in shops, some were students but we have all left that now to fight the regime,” one FSA fighter told me. “We are helped financially by our friends and family in the neighbourhood, by businessmen and by the Syrian National Council.”

The SNC promised to pay salaries to FSA fighters and defected soldiers in April from a fund contributed to by  oil rich Gulf Arab states. However, fears that Saudi Arabia’s provision of cash and weapons to the rebels has encouraged some fighters to imbue the 17-month uprising with an Islamist agenda has worried many in the crisis-ridden country.

With almost all shops in rebel-held areas like Rikn el Din on strike for weeks now, the reliance on charity and foreign aid is likely to persist, if not increase.

Many of the estimated 1.5 million displaced Syrians are being sheltered and fed by relatives and good Samaritans. Meanwhile, schools all over Damascus — empty during the summer months — are being opened to accommodate the thousands of displaced families coming in from all over the country and relying heavily on the charitable donations of clothes, food and money.

The Syrian government has said that schools will reopen for teaching in mid-September but has not given any suggestion or plan for how to accommodate the tens of thousands of refugees using them for shelter.

“It is exhausting being in a constant state of flux and instability,” Leena, the mother of three, told me at the end of our phone conversation last week.  She confessed to being despondent and anxious, and feels there is no end in sight for the crisis that is engulfing Syria.

“I know I am luckier than most because my relatives have taken us in,” she said.  “But my husband isn’t making any money and we’re living off our savings … I just want this crisis to be over so I can go home and put my children in school and live a normal life again.”

(Editor's Note: Layla M. recently returned to London from Damascus. The author’s identity, and those of her interviewees, have been shortened or changed to protect them from possible reprisals.) 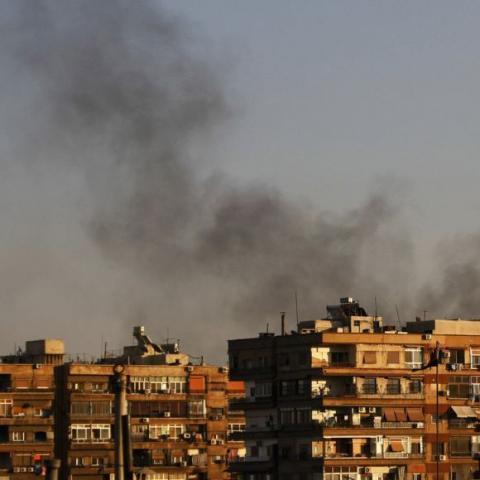 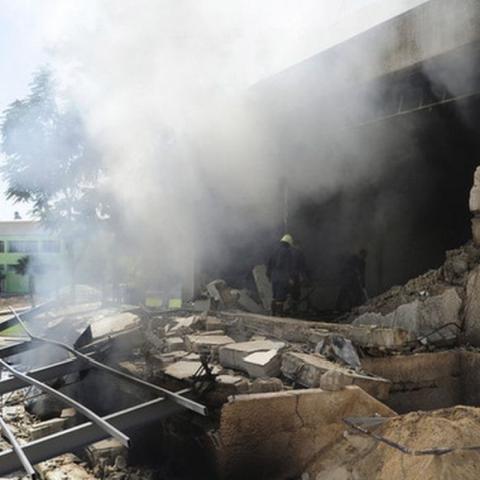 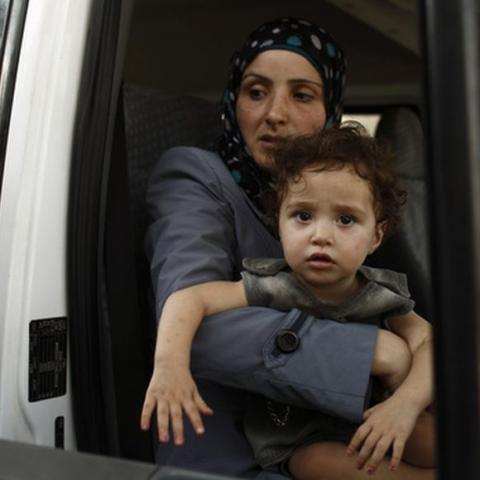