In Syria, Ramadan Bustle Eclipsed by Plans to Escape

The start of Ramadan in Damascus usually sees Syrians wishing family and friends well as they scurry between shops buying supplies for the sunset meal which breaks the fast, writes Layla M. from the Syrian capitol. But this Ramadan, most of the activity on the street is at protests and funerals as Damascenes flee neighborhoods under siege. 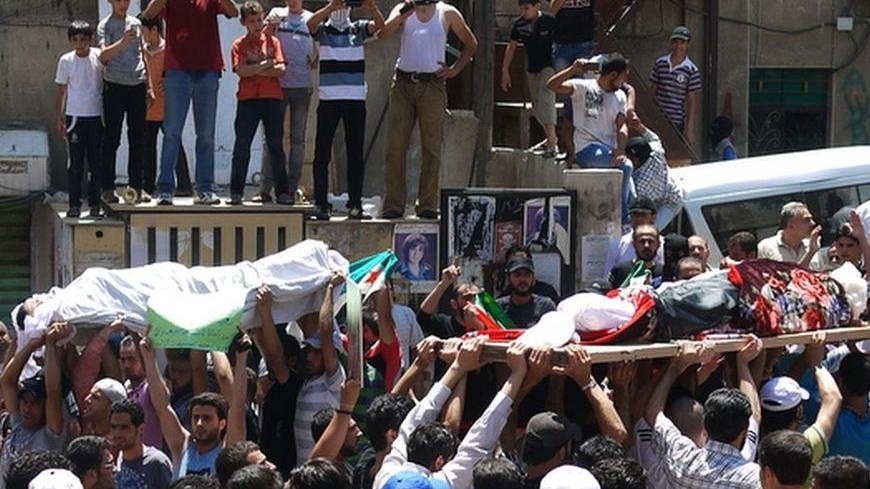 Under scorching midday heat, some ten thousand people streamed through the narrow alleyways in Damascus to pay their respects with prayers and protests for four Kurdish men killed during fighting with government forces. - Layla M.
Layla M.
July 21, 2012

Where the wind goes nobody knows.

In Damascus, on any other eve of Ramadan, the streets would be busy with Syrians wishing family and friends well as they scurried between shops buying last-minute supplies.

But this year’s Ramadan eve, on Thursday, was devoid of the typical feelings of joy and peace felt at the commencement of the Muslim holy month.

“My feelings are with the revolution more than with Ramadan,” said Lina, a 40-year old housewife. “We normally get a lot more prepared but now people are dying in heaps, destruction is everywhere... If the regime falls in these next few days then the significance and meaning of Ramadan will be doubly great and those who weren't able to participate in the revolution before can finally do something.”

Everyone in Damascus is experiencing sensory overload. The sound of low-flying helicopters and the thud of tank-fire have become familiar, as has the continuous sound of live news broadcasts and ringing telephones.

The coffers of the two Syrian mobile networks, MTN and Syriatel — the latter ironically owned by Rami Makhlouf, President Bashar al-Assad’s cousin —  have likely swelled in these last few days as people desperately check in with friends and family members living in areas experiencing heavy fighting.  But even this form of connection is being threatened by a shortage of phone cards. Cooking gas, petrol and bread are also in short supply.

Damascus looks empty, most notably the affluent and typically pro-regime neighborhoods, where fear of regime collapse and the advance of the Free Syrian Army has prompted many residents to flee the country or stay indoors, with doors barred and shutters drawn.

The most active neighborhoods are those under Free Syrian Army control, such as Rikn El Din, a largely Kurdish neighborhood criss-crossed with narrow alleys. Here, heavily armed young men position themselves on street corners and rooftops in order to guard against regime snipers who may target throngs of protestors who chant and cheer against the Assad government in routine demonstrations.

Such areas are off the regime’s radar, and residents are used to taking care of themselves. Fighters have overturned waste disposal units to serve as makeshift barricades; activists arrange pick-up trucks to collect the neighborhood’s garbage; volunteers with the revolutionary coordination committee try to ensure residents’ safe passage and shelter.

Despite the high probability of imminent attack, the residents here displayed incredibly high spirits, even during the funeral for four local men killed during fighting with government forces the previous day.

Thousands showed up despite the midday heat to pay their respects. The crowd carried the bodies, wrapped in the revolutionary Syrian flag, on their shoulders.

Flanked by my "bodyguards" on either side I pushed my way to a higher vantage point. The crowd was defiant as they recited anti-regime chants and clapped in unison. Notwithstanding my own sheepish feelings of intrusive voyeurism, both men and women alike thanked me through mournful tears for my “efforts.”

But any hope the residents of this neighborhood may have had that the Assad regime was about to collapse has been dampened by the government’s ability to viciously fight back. Local activists in Damascus told me the death toll of civilians and FSA fighters in the capital during the past three days of fighting topped 500. As I write this early Saturday morning, breaking news is coming in of another alleged massacre, this time in Tafas, where people were allegedly trying to flee government shelling.

They’re among the tens of thousands who have fled their homes this week.  In the opposition neighborhoods of Zahira and Midan, Berzeh and Douma, Kafr Souseh to the Yarmuk, families have packed what belongings they can carry or fit into a car and fled. Thousands of residents, with young children and bags in their hands, stand on the side of the city’s highways under the hot summer sun waiting for a good samaritan to offer them a place to sleep.

Generations of families in the opposition stronghold of Midan hurriedly fled their ancestral neighborhoods, looking back only long enough to see their irreplaceable and iconic Damascene homes demolished.

In quieter neighborhoods in the capital, households have seen their occupants double, if not triple, in size in recent days as most people have opened their doors and wallets to those who can’t or won’t flee to nearby Lebanon, the border of which is only 20 miles away. An estimated 30,000 people have already fled there in the past three days, Lebanese border officials told Reuters. There have been reports of similar exoduses into Turkey, Iraq and Jordan.

Relief may be fleeting for those who have sought refuge inside Syria, as government forces have widened their onslaught. The unluckiest have fled several times over.

“We lived in [the Damascus suburb of] Douma which became a war-zone so we left and rented a place in Zahira,” a mother of three told me.  “Two months later, fighting erupted there and we had to leave again to my in-laws in the Halbouni. There are now 14 of us staying in a two-bedroom house but even that isn’t safe anymore.”

But the regime has not yet won, and it appears to have paid dearly in the three days of fighting. One eyewitness at a government hospital said this week that wounded soldiers were constantly pouring in for treatment.

Although there’s no way to confirm it, opposition activists also told me army defections have increased significantly since the fighting came to Damascus, including Maher al-Assad’s notorious 4th Armed Guards.

The FSA also touts their success in bringing down government aircraft and, at least briefly, gaining control of official border crossings on both the Turkish and Iraqi borders.

Still, the regime is not going without a fight. Syrian state television has been broadcasting images of what it says are troops clearing opposition neighborhoods, like Midan, of “terrorists.”  The fighting seems to have quieted down in Damascus, and there are more people on the streets today than Thursday or Friday, the peak of the opposition’s effort to take the capital and strike a death blow to the regime. Photos of Friday’s funeral for the regime’s three assassinated officials, including the minister of defense, clearly showed a ruling elite that wants to be perceived as cool and confidently still in power.

Still, the funeral was not broadcast live, nor was Assad’s only appearance since Wednesday’s assassination, when he was shown swearing in the new minister of defense in what was a clearly pre-recorded bit of footage.

There are contradictory reports about Assad’s whereabouts and intentions, countless conspiracy theories and possible outcomes.

“I feel good about the opposition’s recent gains; who knows what will happen next?” said a Damascus resident named Abd.  “The government attacks are so brutal and unrelenting; I am really scared about the possibility of much worse still to come.”

Abd is one of those considering moving his family to another, safer part of the city. But until the opposition wins a decisive battle, or a death blow to the regime is struck, the country whose winds once wafted with the scents of jasmine now wreaks of fear, blood, rotting flesh and uncollected garbage.

(Editors note: the author’s identity, and those of her interviewees, have been shortened or changed in order to protect them from possible reprisals.)