Has Assad Won The First Round In The Battle For Damascus?

The Syrian opposition scored a big victory last week with the assassination of members of Assad's inner circle, but the gains quickly slipped through their fingers in the face of the regime's overwhelming might. Layla M. goes to crucial Damascus neighborhoods in the battle, where she talks to city residents. 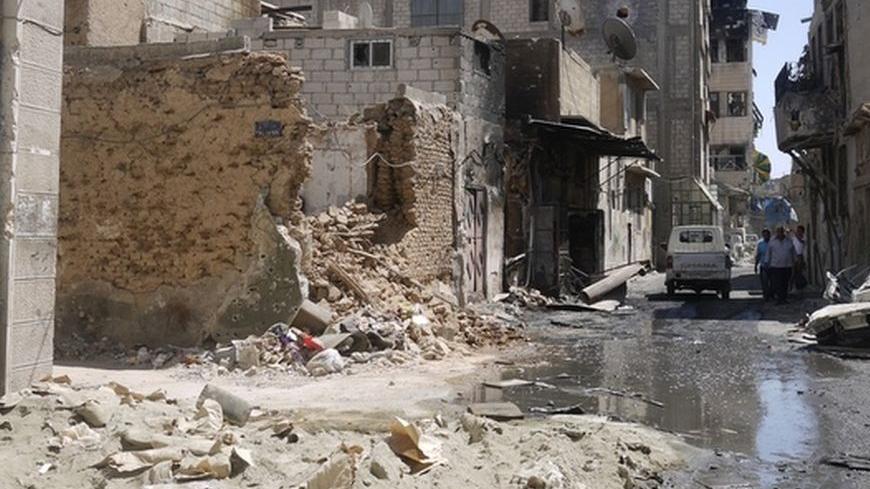 DAMASCUS — Tensions in the crisis-ridden Syrian capital ran high last week as temperatures hit 115 degrees Fahrenheit. A sense of oppressiveness was compounded by the stench of fermenting garbage and barrages of artillery, tank and helicopter gunship fire that rang through the city.

The audacious assassination of members of the regime’s upper echelons and simultaneous penetration, and control, of districts in the capital boosted the opposition’s morale to new heights last week, raising hopes that an end to the Syrian crisis was near.

However, the Free Syrian Army failed to decapitate the regime and didn't receive much-needed reinforcements. It was therefore unable to withstand the overwhelming might of the regime’s continued onslaught, and the rebels withdrew fighters from several areas.

“The regime’s army is huge, well-equipped and getting better and newer weaponry every day, so the FSA should just stop this messing about and wait for the 2014 elections because they’re not going to win,” said Housam, a 30-year old living in one of Damascus’ upper-class neighborhoods.

Indeed, judging by the FSA’s retreat from the Midan, a staunchly anti-regime district in the south of Damascus, and their failure to stop regime forces from devastating Mezzeh, Kafr Souseh, Berzeh, Tadamon, and many others, it looks like the FSA still has its work cut out for it if it is to “win” Damascus.

Even Rikn el Din, a district which celebrated its fall to complete FSA control on Saturday, was negotiating a “cease-fire” with regime forces by Tuesday to allow them entry into the district, providing that neither side would draw its weapons. Still, FSA fighters kept their positions and weapons poised and non-military activists were urged to go underground after having hastily revealed themselves “post-victory” in televised protests and to pro-government allies.

“We’re waiting for the weapons to arrive…we have 600 men ready and waiting to fight but without arms to carry,” said one opposition activist in Rikn el Din, a worrisome statement that indicated a lack of preparedness and ability to prevail over regime forces.

“So long as the bulk of the army remains loyal to the President, the FSA will lose and the regime will stay,” Housam explained.

The regime continues to scare Alawites and other minority communities with tales of “terrorist” plans for vengeance against them, and remains propped up by enough loyalists to continue crushing the opposition. Indeed, the last two days has turned the tide in favor of the regime and its supporters, who are helped by state television’s prolific propaganda, including daily nationwide text messages warning people that the television station is under threat of either scramble or interference by “foreign infiltrators.”

Footage of young, fresh-faced soldiers joyously recounting their success at having “cleansed” Midan of “armed terrorists” has tugged at loyalist heartstrings.  The immediate clearing of garbage and dead bodies in the streets aimed to restore a sense of government-controlled normalcy, as well as residents who had fled, to their homes.

However, my drive to Midan, usually a 15-minute jaunt, took two hours, including passage through a heavily barricaded checkpoint, belying any sense of normalcy. Devastation was everywhere: bullet-ridden doors and shutters, collapsed buildings, burnt houses, crumpled cars and smashed windows made up the new backdrop in this traditional Damascus community.

Residents’ happiness to return was quickly soured by the discovery that their homes had been ransacked. They found that items were missing and food, recently bought in preparation for Ramadan, rotted after days without electricity. Some returned home to find remnants of their food spread on the dining table, presumably eaten by soldiers during their “cleansing” rounds.

“Please tell them, tell the world to cut China and Russia off and to get us a no-fly zone,” Rami pleaded through choked tears as I sat in his turned-over living room. “Wallah (I swear), if it wasn’t for my family I would be out there fighting with the FSA,” he added, surprisingly neither angry nor resentful at the FSA’s entry and subsequent withdrawal from his neighborhood.

As I walked around the dilapidated streets I went through a narrow alleyway and passed a doorway in which an old lady stood crying as she looked at the ruins of her home, every inch of it charred and broken after being hit by a rocket.

As the fighting calms in some neighborhoods, people have begun wandering from their homes to shop for supplies and the city has regained some of its activity. Traffic is still snarled because of roadblocks and checkpoint queues, but there is  a semblance of normalcy and peace, which no doubt buoys the regime.

Last week the police were scared — and hard to find.  This week, they are back to normal duties and they project a thuggish, victorious attitude. I spotted a group of them gruffly pushing around a young boy manning a donkey cart in the old city.

Shops have begun to re-open, but business remains slow. Petrol tankers arrived to restock stations, but the central bank is still not releasing large funds. The look of anxiety and desperation remains plastered on everyone’s face, amplified by stories of rape and murder that permeate the city.

The regime appears to have won Round 1 in the fight for Damascus, but the war is far from over. The approximately 40,000 FSA fighters and thousands of opposition activists and supporters cannot afford to give up the fight and risk the merciless wrath of the regime thereafter. President Bashar al-Assad has given little indication of a willingness to negotiate a settlement with the opposition or to step down, despite attempts by both the Syrian National Council and the international community to form a transitional government.

Though the past two days have ushered in a cooler breeze and awakened the city from its coma, depression and worry linger in the air with no peaceful end in sight.

"What if after all this time, the regime stays and nothing changes,” asked one disheartened opposition supporter. “What would all that we have endured been for?”

That disenchantment is starting to echo throughout the city.

“Honestly, neither side is a very attractive option for Syria but the FSA won’t win in a 100 years over government forces…they’re beasts,” said a Syrian who was neither pro-Assad nor pro-FSA, but part of a growing, unaffiliated segment of the population.

Layla M. is a writer in Damascus.

(Editors note: the author’s identity, and those of her interviewees, have been shortened or changed in order to protect them from possible reprisals.)