For Many Assad Supporters, Other Paths Appear Riskier

Syrians opposed to Assad’s rule often get more media attention, but a visit to Damascus shows that a sizeable — and perhaps decisive — part of the population supports, or at least doesn’t resist, his remaining in power. Some even blame parents who bring their children to protests — to “get shot and killed” — for fueling violence. 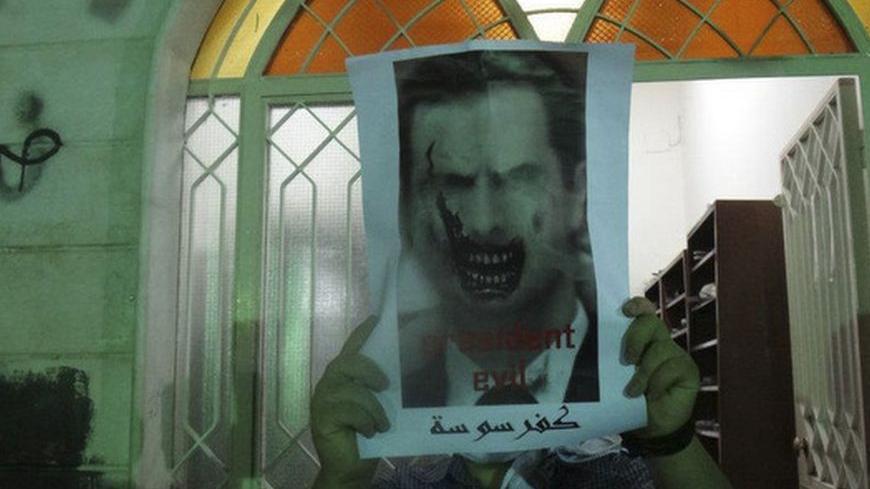 DAMASCUS — Iraq’s Saddam Hussein had Tikritis. Hosni Mubarak had Egypt’s ruling party elite and their patronage networks. Libya’s Gadhafi had Sirte and a smattering of other towns.

In Syria, a visit here makes clear there is still a sizeable — and perhaps decisive — part of the Syrian population that supports, or at least doesn’t resist, Syrian President Bashar al-Assad's rule, although the opposition often gets more media attention.

Some worry about losing jobs, patronage or connections if the Assad regime survives, or even hangs on for a while. Some dread the Iraq scenario: sectarian bloodletting and chaos.

Others fear what might come after Assad: a change in the balance of power between the United States and Iran; a foreign-backed carving up of Syria; and they fear an extremist Sunni Muslim government bent on ridding the country of its Christian and Druze minorities, and a campaign of killing and/or forced relocation of Assad’s Alawite brethren.

“As a Druze, I am frightened that if the authorities in Damascus were toppled the Muslim Brotherhood will take over the country and minorities won't feel safe anymore,” said Firas Adnan, a 29-year-old engineer from the Damascus neighborhood of Jaramana. “It is very important for us that a secular regime governs Syria to avoid the oppression of minorities.”

“As for the the Free Syrian Army (FSA), I see them as a group of extremists who have no agenda except for toppling the regime and taking over power,” Adnan continued.

The proliferation of arms in residential neighborhoods by masked men casually dressed in civilian clothes has reinforced perceptions among those skeptical of the FSA. The spray-painted anti-Assad slurs all over the capital’s walls and shops have made the city unsightly; neighborhoods have been destroyed following the fighting in, and subsequent FSA retreat from, those areas. Increased reports of the FSA’s violent treatment of Alawites and pro-regime Syrians are all causes for concern.

The video released last week in Aleppo that appeared to show FSA fighters executing more than a dozen accused regime thugs, called shabiha, and Aawayini, meaning collaborators, at a school will not help to win the trust of those Syrians skeptical of the insurgents' motives. It may also help push some opposition supporters away who are disgusted by the FSA’s real or rumored use of violence.

“They talk about wanting democracy, but I am now too scared to even voice my opinion in public for fear I’ll be called a collaborator and be killed,” a 60-year old retired schoolteacher, named Obeyda, told me over a coffee in her living room in Muhajirin in late July. She used to be very critical of the regime but now she’s more critical of the FSA.

When I asked one opposition activist about the murder of suspected or real collaborators, he justified the violence on the basis that these collaborators act as government snoops, giving names of protests and activists who are then abducted by the regime; they may face imprisonment, torture and a painful death.

So-called Jihadist groups, like al-Nasra Front, or the as-yet-unidentified international Islamist group that kidnapped two foreign journalists in Northern Syria in late July, haven’t helped. Although it was the FSA who rescued those journalists, their revolutionary cause has been nonetheless tarnished among many Syrians — both pro- and anti-regime.

Even within the conservative Sunni community there is fear of Islamic extremists. In late July, I met a Syrian woman in her early 30s named Kadijeh. She told me how Islamists distribute calendars in her neighborhood of Al Kadam, in Damascus, that blamed the Assad regime for women’s “immoral” dress. Kadijeh, who works as a maid, wore a headscarf pinned tightly at the chin and a long overcoat.

“I don’t want an Islamist regime taking over here, that would be a disaster,” Kadijeh told me, before relaying unconfirmed “stories she had heard” of Alawite women being abducted, raped and killed by the FSA. She said the FSA fighters are rumored to call their religious scholars in Saudi Arabia for spiritual guidance in the commission of such crimes.

A part of Syria’s population is sufficiently persuaded by the government’s assertion that violence in the country is a result of “armed terrorists” who have infiltrated Syria at the behest of “foreign conspirators” that they consider the regime’s use of violence unpleasant but justified.

Depending on which day, they say Israel, the United States, Saudi Arabia, and possibly Qatar, are all working together to bring down the Assad regime.

These people say the goal is to split Syria apart, and they cannot bring themselves to condemn the regime, instead blaming parents who bring their children to protests — to “get shot and killed” — for fueling violence in the country.

“There are lots of people within the regime who are secretly opposed to it and who fire on protesters just so that the regime can fall into a trap,” said Obeyda, the retired schoolteacher.

For some people in Syria, the fear of foreign intervention and of a weak country without Assad has made them reluctant to admit the abhorrence of the regime’s actions during the conflict, superseding the notions of freedom and democracy for which elements of the FSA say they are fighting for, and which Syrian opposition activists say they are pushing for.

Those who formerly ridiculed the propaganda found on the government’s official television stations, refusing even to believe the weather forecasts, now look to it as the standard-bearer of “truth” in the face of the “anti-Syrian and biased Western news coverage.”

And, after decades of Assad-family rule, some people in Syria cannot separate the president from the people and country.

“I don’t believe in “foreign altruism” or in America’s policies toward us. They want to destroy the country and then let Israel invade us,” added Obeyda.

The arguments offered by regime loyalists and sympathizers appear mainly to reflect decades of indoctrination in which Assad and Syria’s fate and success were one and the same, leaving many Syrians fearful of a future without the only regime most of them have ever known.

Moreover, America’s controversial Mideast policies and its bloody “democratization” of Iraq — a country still reeling from mass murder and bombings a decade after its own Baathist regime fell — does little to assuage these fears. In addition, there are concerns that Syria’s support for Lebanon’s Hezbollah will be withdrawn following the regime’s collapse.

The splintered state of public opinion, and apparent distrust of the opposition even among Syrians who are no fans of the regime, sends worrying signals about the difficulties that lie ahead for Syria’s rebuilding and reconciliation process.

Sadly, it seems the limited scope within which these Syrians view the future of their country — with or without Assad or with or without foreign intervention — does them a great disservice, keeping them on the periphery of what could be a stronger and more unified call for political reform and liberty.

“When this uprising ends and the regime has fallen, what will those pro-regime Syrians say about themselves?” One 24-year-old opposition activist asked me during a late-night conversation on a friend’s balcony in the Damascus neighborhood of Rawda. “And those that were on the fence … what part will they say they played in bringing about a new Syria?”

Layla M. has been reporting for Al-Monitor from Damascus.

(Editor's Note: the author’s identity, and those of her interviewees, have been shortened or changed to protect them from possible reprisals.)