Most Alawites remain steadfast in their support for Syrian President Bashar al-Assad, but many are quietly horrified at the high number of Alawite men dying in combat. 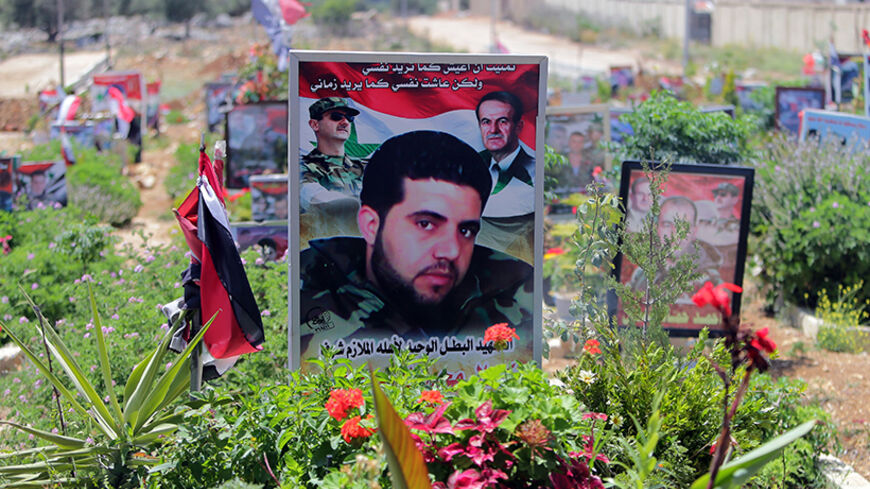 The portrait of a Syrian soldier who died during the Syrian conflict is seen at the Martyr's Cemetery in the city of Tartus, May 18, 2014. - AFP PHOTO/JOSEPH EID

A correspondent in Damascus
August 5, 2014

TARTUS, Syria — There are no official statistics regarding the number of Alawites who have lost their lives since the peaceful protests in Syria turned into an armed sectarian conflict in many areas of the country. Human rights organizations are not counting the victims in Syria on a sectarian basis.

However, in statistics published July 12, the Syrian Observatory for Human Rights announced that 65,803 people from the ranks of the Syrian regime forces and armed groups loyal to it have died. It is likely that the vast majority of the dead are Alawites, especially among the militias fighting alongside regime forces.

A visit to the cities and rural areas inhabited by an Alawite majority suggests that the number of deaths may exceed this figure. There are thousands of photos posted on walls and hung at intersections of young men who have lost their lives in the war, and all of them include slogans in support of President Bashar al-Assad. In these areas, Alawite support for the Assad regime remains strong, as evidenced by the large number of portraits of Assad spread throughout the coastal region. But words of anguish are being quietly muttered in these corners of Syria, as the death toll among Alawites continues to rise.

Al-Monitor spoke with a young girl during the funeral for her brother, who was killed in a recent battle. She said, "In spite of everything, Assad is our choice and we will not back down on this. The conspiracy against Syria is huge and there is no substitute for Assad, with his political expertise and alliance with Russia and Iran. Without Assad, we will all meet a bad fate and perhaps be killed at the hands of terrorists in the same way that the soldiers of the 17th Regiment were killed in Raqqa."

This girl summarized the position of many Alawites up until now. However, social media networks show that some supporters of the Syrian regime are growing angry at the corruption and its spread throughout the governmental institutions, while thousands of young men die fighting for their country. One regime supporter wrote on a Facebook page created to protest corruption in Tartus, "The son of a poor man does not own a house, and dies as a martyr in war, while the son of a governmental official builds castles." So far, their expressions of anger remain limited to Facebook.

In one of the Alawite villages in the countryside of Latakia, sadness and despair are evident on faces everywhere. A village resident in his 60s who spoke to Al-Monitor on condition of anonymity said, "At least half of the village's youths are spread among the fighting fronts. Dozens have been killed, and the authorities weren't even able to recover the bodies of some of them. Assad is leading the sons of the Alawite sect to certain death." Asked why they fight for Assad and support his authority, even though he is leading them to death, he replied, "Although I believe that Assad is leading the Alawites to death, only a minority of the village residents share this opinion. Even I don't dare to say this in front of many of them. Most Alawites believe that there is no alternative to Assad, and that they cannot stop fighting alongside him. The extremism of most Islamic opposition brigades pushes [Alawites] to cling tightly to their positions."

This man’s view seems uncommon indeed among his neighbors. A woman from the same village emphasized, "We must continue to fight." Although she lost one of her children in the Kassab battles this past spring, she stressed, "The rest of my sons are still in the battle. We will fight until the end. If we stop fighting now, this would mean death for all of us. This is why I am angry at the Alawite youth who evade military service," she added.

In the coastal cities of Latakia and Tartus, funerals for the victims are held on a near daily basis. Moreover, only rarely do the people show anger about the large number of dead. However, Al-Monitor spoke with the brother of a soldier who was killed last year. Speaking in a quiet voice for fear that those sitting near him in the Latakia cafe would hear, he said, "Assad has failed as a leader. He is sacrificing our lives to stay in power, but we have no other choice. Abandoning the regime would mean that we would be at the mercy of radical Islamists, and there is no third possibility on the horizon." As to whether many others shared this view, he said, "I think so, and this explains why some Alawite youth evade military service. But many are afraid to express their opinion on the Assad regime because they fear the consequences, including being accused of treason or of being sympathetic to opposition militants."

The pain of loss is permeating the Alawite areas on Syria’s coast, as young men continue to fall in battle in high numbers. While some are critical of the regime’s handling of the war, most Alawites will continue to support Assad in what many see as a war of survival. As a militant fighting for the regime told Al-Monitor, "Many of my friends have died, but we are still fighting to defend our country and sect."