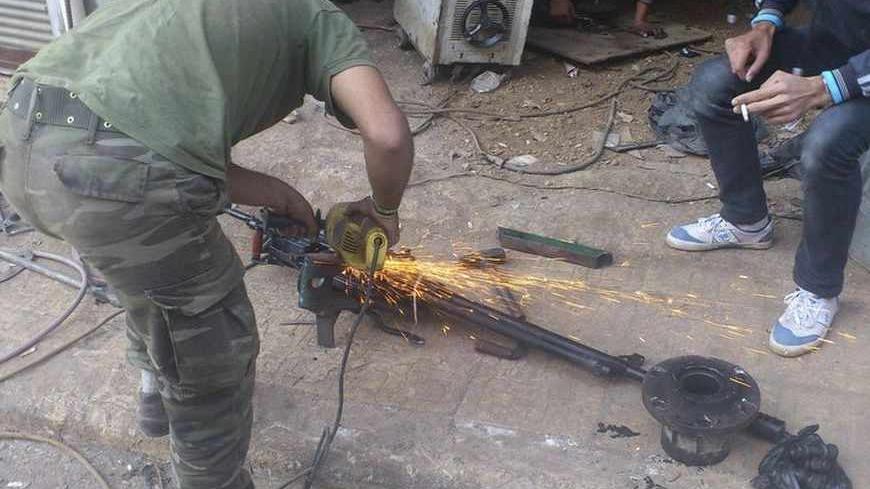 The element of surprise was not the only feature of the armed Syrian opposition’s attack on villages in Latakia’s countryside. It was also characterized by sectarian incitement that called for and justified the “jihadist brigades’” attack on a number of Alawite villages, where they committed massacres against civilians, just because the latter belonged to the same Alawite sect as Syrian President Bashar al-Assad. The secretary of the internal opposition’s National Coordinating Committee (NCC), Rajaa al-Nasser, asserted in a telephone interview with Al-Monitor the NCC’s condemnation of these massacres against civilians, as well as its stance against any sectarian targeting of Alawites or other Syrian citizens.

[Prior to the attacks,] the Salafist Sheikh Anas Airout, who is a leader in the Syrian Islamic Liberation Front, had, on July 1, 2013, called on fighters of the dissident Free Syrian Army (FSA) to concentrate their war effort on the strongholds of the Alawite sect to create a “balance of terror” that would change the course of the conflict.

Airout, also a member of the Syrian National Coalition, addressed opposition forces through Reuters by saying, “We must concentrate on their villages, their homes, their strongholds. We must strike at their infrastructure, and prevent them from living a normal and peaceful life.” He added, “They will turn on [Assad] if we attack their strongholds. We have to drive them out of their homes like they drove us out. They have to feel the pain that we feel. The battle cannot be won unless this is accomplished.”

This scandalous sectarian discourse embarrasses the Syrian National Coalition, which presents itself as a regime substitute that recognizes all factions of the people, strives to reassure religious minorities — among them the Alawites — while affirming that its battle is with the Assad regime and not against any particular sect.

And so, two weeks later, Airout issued a statement through the coalition, in which he denied inciting the attacks against Alawite strongholds in Syria. He further said that he rejected any form of sectarian or religious incitement against a particular faction, while stressing his “full commitment to the principles of the Syrian revolution, and to complete equality among all Syrians.”

Some opposition leaders and pundits think that targeting the Alawites could lead to pressure being put on the regime and Assad by the Alawites themselves, which might compel Assad to agree to political concessions, or even drive the Alawites into considering abandoning their president and dissociating their fate from his. Some also think that the battle for the coast is two years late, and that Alawites should have been targeted in their heartland from the very first day of the revolution; for they were living in safe areas oblivious to the war raging in Sunni areas where cities and villages were being destroyed and people killed, while Alawite areas continued to supply the regular army and affiliated militias with soldiers.

Dissident Syrian writer Sadeq Abdul Rahman published an article on Aug. 8 in which he said: “The rebels unleashing a wide attack on northern Latakia province, adjacent to the regime’s strongholds, and on the outskirts of loci of popular support for the regime, is only logical, because it opens a new front that reduces the pressure exercised on rebel forces elsewhere. In fact, this battle threatens what the regime considers to be its stronghold, perhaps even its last bastion.”

Abdul Rahman even went further to clearly state: “It is time to admit that we are not in the presence of a revolution carried out by ‘one Syrian people’ against a fascist ‘Syrian regime.’ The fact is, this is a popular revolution by the ‘Sunni population’ of Syria against a sectarian regime built upon ‘the Alawite belief that it is their regime alone.’ This is how it is. And because it is such, the subconscious of Syrians rebelling against the regime is overwhelmed by a feeling that the ‘Alawites’ are waging a war from their lands against the land of others and it therefore becomes logical to think that the battle must be moved to the adversary’s turf.”

A member of the opposition Syrian National Council, Saleh al-Mubarak, told Al-Monitor that he endorses the opposition’s attack on Latakia’s countryside “so that the battle may be moved to the ruling family’s heartland, and the Alawites be given notice that they cannot be safe if the rest of the people are unsafe.” Mubarak refused to describe the battle as being religiously motivated. He pointed out that the “battle for liberation encompasses all of Syria; so why would Latakia and Baniyas be different from Damascus and Aleppo?” He added that the previous months’ developments signaled the possible formation of an Alawite state.

About the massacres that the regime and its supporters claimed were perpetrated by foreign fighters and the FSA in villages that they stormed in Latakia’s countryside, Mubarak said, “No massacres were carried out against Alawites just because they were Alawites.” He added, “If this information is true, then the question becomes whether those people were targeted or killed as a result of an exchange of gunfire. Targeting of civilians is wrong under all circumstances.”

As for the kidnapping of the elderly Alawite cleric Sheikh Badr Ghazal, Mubarak said, “He is a prisoner and was not killed. He is a criminal if he supports the regime with his fatwas, just as Mufti Ahmad Hassoun does.”

In a telephone interview with Al-Monitor, NCC secretary Nasser said that “[he rejects] all massacres against civilians anywhere in Syria, because the blood of all Syrians is precious. Therefore, the massacres perpetrated in Latakia were a stab to every Syrian’s heart. There is no difference between the blood of people, whether they hail from Latakia or Aleppo.” Nasser added, “What is occurring in Latakia revolves around the conflict being transformed into a sectarian war, which is a crime in and of itself. The Syrian people, in all its components, have the same blood, and an attack on one sect, regardless of its identity, is an attack that rips apart the Syrian people as a whole. Declaring war on one sect is a declaration of war on all of Syria, whose people’s value emanates from their diversity.”

Nasser said, “Be they in Latakia, Aleppo or Homs, massacres are all the same. The continuation of violence will surely affect political efforts. We must not open new fronts, but must work towards finding a political solution because war will not lead to a victory by any of the belligerents.” He added, “Syrian society is not one of minorities, but of components. There aren’t any minorities in Syria, except for the political minority; and I reject all talk about the existence of religious minorities in Syria. Syrian society is comprised of one single people made up of different constituents and components.” Nasser concluded by saying, “The Syrian opposition is composed of various factions, but the democratic opposition unequivocally condemns the massacres because they will negatively impact the Syrian people’s unity. All these conflicts only increase the body’s conviction that a political solution be immediately reached as it is the only way for Syria out of this crisis.”

Conversely, Syrian dissident Nidal Nuaiseh told Al-Monitor in a telephone interview that “what occurred is part of the war scenario that is being waged on Syria. The coastal region is particularly sensitive because its inhabitants predominantly belong to one sect. Perpetrating these massacres is an attempt to foment sectarian strife and  provoke sectarian rhetoric, in order to maybe achieve what the terrorists have protractedly longed for. Salafist calls for the murder of Alawites are not new, but are at the core of the Salafist ideology, and have been at its core for hundreds of years. The difference now is that there are regional and international powers that are trying to exploit this legacy in the Syrian war.”

In response to the concerns of Alawite inhabitants following the massacres, Nuaiseh said, “I don’t think that anything will change. The people who committed these acts and massacres are not Syrians. Everyone saw and heard the statements and pictures of the butcher Adel al-Oteibi who slaughtered those people. Even if Syrians were involved in the massacres, they do not represent all Syrians who have historically coexisted for eons regardless of their religious affiliation and associations. Furthermore, there was no retaliatory reaction on the part of Alawites.”

Nuaiseh said Syrians are a very aware people, which prevents Syria from sliding into an all-out sectarian war. He also indicated that there was no political solution in sight, and that no one was working on finding one. A political compromise was endorsed by the opposition abroad in case it lost the military conflict. But, the military situation has grown more intense as a result of the great support received by the militants, and the Saudis entering the fray to open new military supply routes. The escalation witnessed in Aleppo, Khan al-Asal and Latakia occurred after the failed visit of the Saudi head of intelligence, Prince Bandar bin Sultan, to Europe and Russia, and once hopes for international involvement in the war against Syria went unanswered. As a result, Bandar’s disappointment and anger manifested themselves on the ground, once the Saudis were officially given control over the Syrian file and Qatar was isolated and removed from its position of prominence.

A Syrian source living in Latakia and loyal to the regime revealed to Al-Monitor that military developments in the battle for Latakia’s countryside were expected to occur within days; not only to liberate some of the large farms and small villages that the opposition had overrun as a result of the treachery of some “weak souls”, but also to attack the town of Salma. The latter has become a significant stronghold for “terrorist” gunmen, and is the location of important command and control centers being run by European, Saudi and Qatari experts.

On the other hand, the FSA’s Chief of Staff Gen. Salim Idris, during a visit to Latakia’s countryside just dozens of kilometers away from Assad’s hometown of Qardaha, vowed to provide the opposition fighters with a constant flow of arms for them to continue the battle “to completely liberate the coastal region, and deprive militias loyal to the regime of their safe havens on the coast and all of Syria.”