Thousands of mostly Sunnis from Aleppo fleeing the violence in their city have found work, and little discrimination, on the Alawite-dominated Syrian coast. 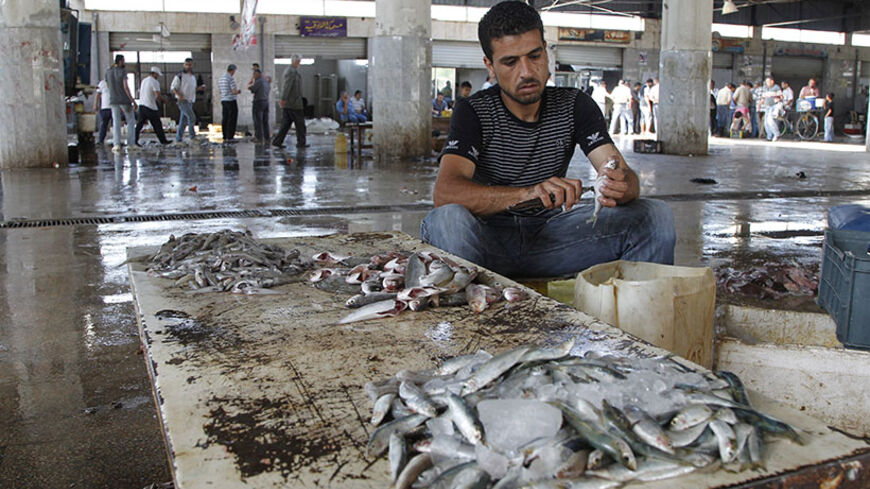 A fish seller cleans fish at a wet market in Latakia, May 25, 2014. - REUTERS/Khaled al-Hariri

A correspondent in Damascus
June 4, 2014

TARTUS, Syria — The Syrian coast is not what it was before the outbreak of the Syrian revolution. The war has brought sporadic displacement from the provinces of Homs and Hama, as well as other regions, to the coastal provinces of Tartus and Latakia. The situation was hard for many of the displaced after they were subjected to restrictions by the security services and some regime supporters from the Syrian coast, the majority of whose residents are Alawites. After armed brigades opposing the Syrian regime gained control of some neighborhoods of Aleppo in 2012, tens of thousands of Aleppan residents also fled to the Syrian coast to escape the fierce battles and heavy shelling.

Along the coastal districts, hundreds of Aleppans are quite visible, staying in houses rented from Alawite landlords and distinguishable by their accents and clothes. Meanwhile, it's rare to see someone from elsewhere — the Homs countryside, for example — living in these districts.

Al-Monitor spoke with an aid activist from the city of Tartus who requested anonymity and said, "We were working to provide aid on a small scale and without a license from the authorities. Yet, ever since the huge waves of displaced came from Aleppo, official institutions have become involved in providing aid. The authorities have opened shelters and they oversee them. We now work via licensed associations. The authorities have dealt differently with the displaced from Aleppo [compared with those from other regions], facilitating their residency, their obtaining of aid and their entry into the labor market."

Most of those who came to the coastal regions from Aleppo are small-scale merchants and skilled craftsmen. They began to work with the coastal residents, and some opened their own businesses. The aid activist said that the authorities were not skeptical about their intentions, and did not subject them to tight security monitoring. Although they were largely Sunni, the local Alawite community did not treat them with caution and fear. Many of the Aleppans here are considered supporters of the regime. According to the common narrative, the war imposed this situation on them, and the militants that came from the Aleppo countryside stormed the city without the approval of the majority of its residents, who were also mostly Sunni.

The Aleppan presence in the labor market in Tartus and Latakia has recently become more visible. It is fair to say that today, most of the craftsmen in Tartus and Latakia’s industrial regions are from Aleppo. On a stroll through the markets one will hear the Aleppan accent being spoken by many workers in restaurants, stores and workshops. The presidential election scheduled for June 3 have also highlighted the commercial presence of people from Aleppo, as some Aleppan merchants have hung massive posters in support of Assad in the cities along the Syrian coast.

That so many youths from the coast are now fighting with the Syrian army and the National Defense Force has meant there is little job competition, for now. An Alawite owner of an industrial workshop who spoke to Al-Monitor on condition of anonymity said, "The workers and craftsmen from Aleppo are skillful and active. They have swallowed up the labor market. I have employed many of them in my workshop. However, this does not represent a threat to the workers from the coastal regions, because many of the youth from the coast have gotten involved in fighting in the ranks of the Syrian army and National Defense Forces and left their jobs vacant."

But the influx from Aleppo has not only come from the working class. Merchants, too, have set up shop and are eating into the local market. The workshop owner said, "Our profits and business have fallen recently. But we do not know for sure if this is the result of the war and the deterioration of general economic conditions, or if it is the result of competition from Aleppo [merchants].”

The internally displaced have, however, contributed to additional market and business opportunities, the businessman said, explaining, “The population of the provinces of Latakia and Tartus does not exceed 3 million, and now there are nearly 1.5 million displaced — at least — most of whom are from Aleppo. This means that these displaced persons represent an additional market, and thus there is a need for additional capital and businesses. On the other hand, it seems that the capital and labor force from Aleppo in the areas controlled by the Syrian regime benefits the latter, because they maintain the value of the currency and economic cohesion."

There are no precise statistics on the number of displaced people in the Syrian coastal regions. There are only estimates from observers and activists. But when walking in the coastal cities, it becomes apparent that the number of people from the Syrian interior has increased to the point that the number of Sunnis nearly equals the number of Alawites along the coast. This is evidenced by the large increase in the number of worshippers going to mosques, especially on Fridays, as well as by the number of veiled women walking the streets. However, this does not seem to be a cause for concern for the Alawites or the Syrian authorities, defying the sectarian narrative of the conflict. Many of the Sunni Aleppans who have fled to the coast are considered regime supporters, or at least people who do not want to — or cannot — enter into the war against the regime.

A Sunni Aleppan who works on the coast told Al-Monitor, on condition of anonymity, that he has felt little sectarian discrimination on the Alawite-dominated coast. He said, "As soon as I came to Latakia with my family, fleeing from the hell of war, I was able to find work in a car-repair shop. I have not been subjected to any notable harassment, perhaps because I have always announced my support for the Syrian regime. I later learned that Alawites here treat people from Aleppo better than they treat the people of the Hama countryside, for example. Sectarian alignments are clear, but do not go beyond glances, signs and simple harassment. Furthermore, I have not been subjected to detention or insulting questioning at security checkpoints, unlike a displaced person I know from the Hama countryside. The latter was detained and tortured for a few days, without being charged."

Despite the sectarian practices of some agencies of the Syrian regime and militias associated with it, which reached the point of committing a horrible massacre in the village of Bayda last year, the Syrian regime maintains a kind of balance in dealing with various communities. This is evident in the way it has embraced the people of Aleppo on the Syrian coast and facilitated their entry into the labor market, provided they don’t challenge its rule. It seems that the regime benefits from this both economically and politically, by presenting itself to the world as a government that embraces all communities.