Turkey's workplace is the most dangerous in Europe, and critics blame the Justice and Development Party's brand of crony capitalism. 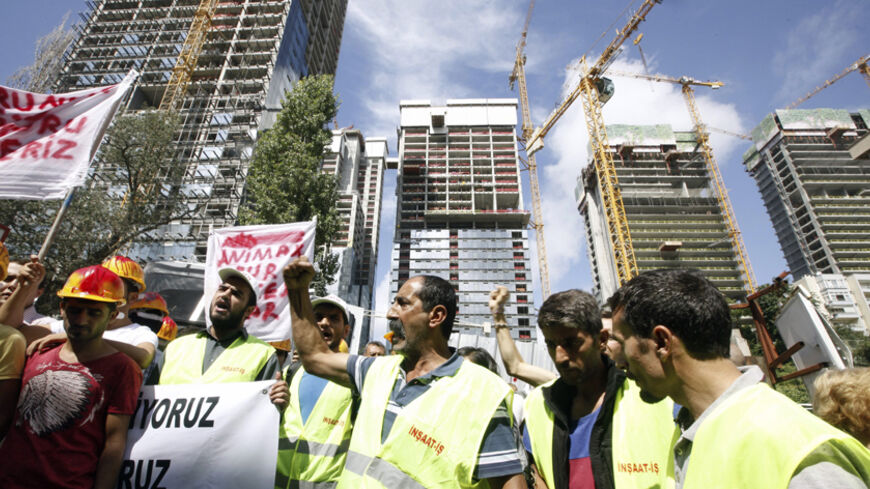 Workers shout slogans during a protest in front of a residential project, where an accident occurred in Istanbul, Sept. 8, 2014. - REUTERS/Osman Orsal

Any visitor to Istanbul will be struck by how the skyline of the city is being littered with expensive and imposingly gaudy skyscrapers that are out of character with the city. These buildings and similar developments around the country are nevertheless seen as important indicators of Turkey’s impressive economic growth.

Needless to say, the Justice and Development Party (AKP) government claims credit for most of this growth, having come to power in 2002 immediately after one of Turkey’s worst economic crises. Turkey’s impressive economic recovery after the 2001 crisis, however, has its dark side.

To start with, it did not improve conditions for Turkish workers, who remain the most underprivileged in Europe. It has not resulted in better workplace safety for them either, as attested by the large number of deaths in recent workplace disasters.

The most striking of these was on May 13, when a mining disaster in the town of Soma killed 301 workers, and resulted in a serious headache for Prime Minister Recep Tayyip Erdogan just as he was preparing to run for president.

Turks woke up to yet another workplace disaster a few days ago when 10 workers were killed at a high-rise residential building site in Istanbul’s Mecidiyekoy district when their elevator plunged 34 stories before hitting the ground at high speed.

With the memory of the Soma tragedy still fresh in people's minds, this latest disaster hit the headlines instantly, turning the spotlight once again on workplace safety in Turkey — a country with one of the worst international records in this respect.

Granted that the number of workers in this sector has increased from 1.2 million in 2008 to over 1.9 million in 2014, but the high number of deaths — seven times higher than the EU average — indicates that worksite safety remains a problem in Turkey. Trade union officials even contend that 90% of workplace accidents are never reported or registered.

Given this overall picture, accusations and recriminations following the Mecidiyekoy disaster were quick to come, especially after accounts by workers that pointed to criminal negligence. The Turkish Chamber of Mechanical Engineers (TMMOB), as well as the main left-wing trade and worker’s union confederations DISK and KESK, and the Union of Turkish Doctors (TTB), are convinced about negligence and blame the government.

In a joint statement issued after the elevator accident, they accused “greedy capitalists and the AKP government that protects them” of being responsible for the deaths of the 10 workers. They said businessmen seeking higher profits were cutting costs at the expense of the safety of their employees.

These accusations ring true for the public, especially after the revelations about the reasons behind the Soma disaster in May. Aware, therefore, of the potential for negative political fallout, Prime Minister Ahmet Davutoglu came out immediately and promised that his government would get to the bottom of this latest tragedy.

“Nothing will remain in the dark with regard to this incident,” he told reporters after news of the accident in Mecidiyekoy broke. He added that the Cabinet would be discussing the matter in detail the following day.

Many note, however, that despite the 301 deaths in the Soma mine disaster, the government still has not ratified the Safety and Health in Mines Convention of the International Labor Organization (ILO). Union officials say this is because the government, in a desire to achieve high growth rates for the economy, automatically favors business over labor and is reluctant to take steps that will be a disincentive for potential investors.

Unlike the CEO of the company operating the Soma mine — who disappeared for days after the disaster — Aziz Torun, the CEO of the Torun Group building the 42-story skyscraper in Mecidiyekoy, was quick to hold a news conference and defend his company.

He denied claims that the elevator involved — which apparently also carried building materials — had not been inspected, saying the last inspection was in April, and that he had used that elevator recently. Torun did not hold back from accusing his workers of being generally careless.

TTMOB’s Istanbul branch announced later that the last inspection date for the elevator had expired on Aug. 30, after which nothing had been done. Meanwhile, workers from the building site told reporters that the same elevator was involved in a similar accident on Sept. 4, although there were no casualties because no one was in it.

These workers also said another accident involving the elevator had occurred 20 days ago but that precautions had not been taken then either, on the grounds that funds for this were being delayed.

Other employees were reported in the media as saying that a 19-year-old worker for the same group was killed in a building site accident in April, and that the company had paid only 5,600 Turkish lira ($2,600) in compensation, and freed itself from responsibility.

Meanwhile, it was revealed that the workers who were killed in the elevator disaster were receiving a meager daily wage of between 50-70 lira ($23-$32), apart from being provided with food and a dormitory to sleep in.

This is the kind of revelation that angers the public and provides material for the opposition to attack the government. Akif Hamzacebi, a key figure from the main opposition Republican People's Party (CHP), during a visit to the site of the elevator accident referred to “wild capitalism.” Arguing that this could not be considered a mere accident, Hamzacebi accused the government of serious dereliction of duty.

On the other hand, Sebahat Tuncel, the Istanbul deputy for the pro-Kurdish People's Democracy Party (HDP), submitted a questionnaire to Labor Minister Faruk Celik with a list of six critical questions to be answered about this latest disaster. The HDP is especially interested in the matter, given the large number of workers of Kurdish origin working in building sites across Turkey.

The Nationalist Action Party (MHP), for its part, hit at Davutoglu for referring to the workers killed in the elevator accident as “martyrs.” Declaring that it is Allah and no one else who determines who is a martyr, MHP spokesman Oktay Vural said the government was trying to cover up the fact that it has done little concerning workplace safety by using emotional designations such as this.

Following the Cabinet meeting headed by Davutoglu on Sept. 7, the government announced that it would hold a special investigation into this latest disaster, and would also place the ratification by Turkey of the ILO’s Convention No. 167 on workplace safety — which has been in force since 1991 — on its agenda.

Aware that similar promises have been made in the past but not kept, while those seemingly guilty of criminal negligence have gotten off, it is not surprising that the public should remain skeptical on this score.

The only thing that remains definite at this stage is that the life of a worker in Turkey remains cheap, while the government provides friendly members of the business community just about everything they need — even at the expense of ruining Istanbul’s historic skyline — to accumulate vast amounts of capital.