Reluctant to enforce the addition of costly safe rooms in mines, the Turkish government proposes to equip miners with microchips, a measure that would mostly serve to locate their corpses in the event of accidents. 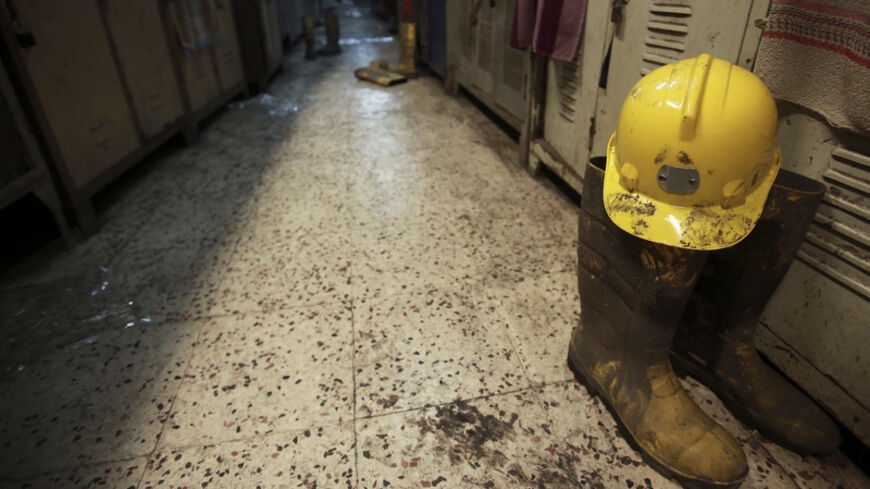 A boot and a helmet are seen in a changing room used by coal miners after a mining disaster in Soma, a district in Turkey's western province of Manisa, May 14, 2014. - REUTERS/Stringer

Mining accidents seem to be Turkey’s destiny. Deadly disasters caused by methane gas explosions, fires, cave-ins and flooding occur almost on a yearly basis. More than 3,000 miners have been killed in Turkey since 1941, including 78 in 2012 and 95 in 2013.

The main reason behind the tragedies is the inadequate level of safety measures in workplaces. In October 2013, lawmakers of the main opposition Republican People’s Party (CHP), backed by colleagues from the two other opposition parties in parliament, submitted a proposal to create a parliamentary inquiry commission to look into the rising number of accidents. The proposal, spearheaded by CHP deputy Ozgur Ozel, called for an inquiry into the reasons and persons responsible for deadly accidents in Soma, a region dotted with coal mines in western Turkey. The proposal, which made it to the general assembly only on April 29, was voted down by Justice and Development Party (AKP) lawmakers, who hold a comfortable majority in parliament.

Two weeks later, on May 13, the deadliest mining accident in Turkish history struck Soma, claiming 301 lives. In fact, to call the disaster an “accident” may be inaccurate. The miners might have not perished had they had safe rooms as their colleagues in European countries do.

Turkish employers, however, are loath to make costly investments. The boss of the Soma mine, for instance, preferred to use his earnings from the mine to erect a luxury residential building in Istanbul rather than setting up safe rooms, each of which would have rescued 40 workers. The $250,000 cost of a safe room was too expensive for 40 lives!

The government could have made the safe rooms compulsory had it wished to do so. During a debate in parliament’s planning and budget commission on July 11, CHP lawmakers proposed making the measure compulsory, but again their AKP colleagues voted down the motion. Labor and Social Security Minister Faruk Celik also said he was against the proposal, flouting one of his basic missions — ensuring worker safety — and turning a blind eye to the regulations of the European Union, which Turkey is seeking to join, as well as International Labor Organization (ILO) conventions, which make safe rooms an obligatory measure.

Last week, the government came up with a cheaper measure: a plan to put microchips on miners. Not a safe room to save lives, but a chip costing just a few dollars to track the workers.

Commenting on the measure, which Prime Minister Ahmet Davutoglu announced as part of a draft package of workplace safety measures, a social media user wrote: “[It’s] a measure they plan to add to mining laws that would supposedly prevent the deaths of miners. What can a chip do to save a human life in the event of disaster? It can only help locate miners’ corpses.”

Indeed, that’s the key question: What can a chip do to save a human life in the event of disaster? Time is a critical factor in mine explosions. The quick refuge of safe rooms saves workers’ lives. But a chip has no immediate rescue function, helping only in locating workers. Reaching located workers takes hours and sometimes days. Hence, the chip itself does not guarantee workers will be saved.

The chip measure is not new for Turkey. Miners at a state-run coal mine in the northern province of Zonguldak have been wearing chips in their helmet lamps since last year. The argument goes that in the event of accidents the chips will make it easier to reach workers — yes, but in most cases that would probably be their bodies.

In comments to Al-Monitor, CHP lawmaker and former trade union leader Suleyman Celebi slammed the deadly incidents as “work murders,” which he said were the result of cheap laborers being employed in lawless and insecure conditions and the government idly watching this disregard for safety.

“During the AKP’s 12-year rule, a total of 14,555 workers perished in work murders. In the first nine months of 2014, the death toll is 1,414. The Labor and Social Security Ministry has failed to enforce efficient measures and adequate supervision to prevent the work murders in mines,” Celebi said.

Celebi recalled that the government, instead of overhauling the workplace safety law in line with international conventions, had urged workers to report the safety flaws in their workplaces.

“The informant system, which puts responsibility on employees and pits them against the employer, is the most primitive and insincere of methods. Nowhere in the world is there such a type of safety supervision,” he said.

First the “informant” mechanism, and now the chip plan — they both speak volumes about how earnest the government is to resolve labor problems and ensure work safety.