Turkey's unionized workforce has dropped from 57.5% to 9.6% over the past decade, with Ankara offering weak solutions to the problem, including a hotline where workers can report their bosses. 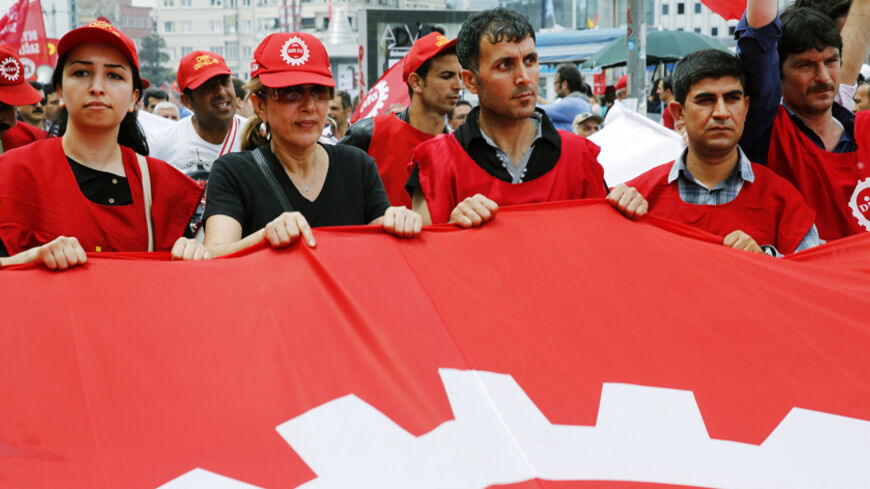 The working class in Turkey is being redesigned. The government has laid the foundations for a new kind of worker who is de-unionized, defenseless and will act as an informant. The subcontracting system, which encourages de-unionization, has expanded into many fields, including health care and municipal services.

The 18 miners who perished in last month’s tragic accident in Ermenek did not belong to trade unions. Trade unions are off-limits, especially for workers in small enterprises, where they can easily be fired if they attempt to join.

The latest statistics illustrate a huge regress in unionization in Turkey. Turkey ranks 24th in terms of unionization rate among the 34 members of the Organization for Economic Cooperation and Development (OECD). According to the Ministry of Labor and Social Security's statistics, the unionization rate is currently 9.68%, down from 57.5% in 2003. This means that out of 12,287,000 Turkish workers, only 1,189,000 belong to a trade union, compared to 2,751,000 unionized workers out of 4,781,000 in 2003.

The figures speak of a severe blow to Turkish unionism in the past 11 years. Moreover, Turkey only counts workers who belong to a trade union, while OECD figures are based on the number of workers who are both unionized and entitled to collective labor contracts. For Turkey, this rate is even lower: 4.5%. In other words, half of unionized Turkish workers are deprived of the right to collective labor contracts, which means they fail to gain any benefit from trade union membership.

Finland tops the OECD list with a 69% rate of unionization, followed by Sweden with 67.7%. The rate is 35.6% in Italy and 25.4% in Greece. In Turkey, the unionization rate is highest in the banking, finance and insurance sector with 28.66%, and the lowest in the construction sector with 2.54%.

The gap with EU nations is alarming for a country seeking membership in the bloc, but no one seems to care. De-unionized, and thus defenseless, workers are left at the mercy of employers, working in difficult conditions for low wages and with little safety at the workplace. As a result, mines and construction sites are often the scenes of deadly accidents.

Yet, workplaces that fail to ensure proper conditions for their employees continue to operate, thanks to widespread nepotism. Take for instance the Ermenek mine. The deadly disaster came shortly after the mine was shut down by inspectors for lacking proper working conditions. But the mine was soon reopened after what Labor Minister Faruk Celik described as “50 people stepping in.”

Will the government learn a lesson from the accidents and undertake measures to prevent them?

Following the Ermenek disaster, Prime Minister Ahmet Davutoglu came up with a proposal to set up a complaint hotline for employees. “We will create a mechanism to allow workers to directly send us their complaints and inform us of abuses if a workplace fails to deliver the rights that we have granted to workers. A hotline will be set for complaints related to work accidents. Such workplaces will be shut down immediately. I’m calling on all workers: Let us know of the breaches. You need to complain so we can intervene and change this mentality,” Davutoglu said.

The prime minister, while well-meaning, seems to ignore the potential consequence of employees becoming “informants” in the eyes of employers, as well as other drawbacks that stem from relying on workers to engage in supervision, which is the state’s duty.

Kemal Kilicdaroglu, chairman of the main opposition Republican People’s Party (CHP), slammed the proposal: “What worker can inform on the boss? They would fire him the next day. The chap [Davutoglu] is clueless about the realities. A worker who has barely found a job is expected to complain of the boss, and the boss is expected to keep him there! Look at the solution they have found to stop workers from dying [in work accidents] — turning them into informants! Instead of taking measures, they are asking workers to inform on their bosses. And what will happen after the boss is reported? ‘Fifty people will step in’ again. And who will end up in trouble — the boss or the poor worker? … I have put forward a proposal for obligatory trade union membership. We are ready to back such a move if they go ahead.”

"Even military rule was better"

In remarks to Al-Monitor, CHP lawmaker Suleyman Celebi, former head of the Confederation of Progressive Trade Unions (DISK), said the current level of repression on trade unions is unheard of, even under the notorious military rule that followed the 1980 coup, when 2.5 million workers were unionized compared to about a million today, with only 624,000 entitled to collective bargaining.

“During its 12-year rule, the Justice and Development Party has curbed all labor rights through laws that are unlawful, siding with the capitalist class. It has besieged workers from all sides, from their right to strike and collective bargaining, to their right of choosing their trade unions. The trade union right of tens of thousands of subcontracted workers has been flouted despite court rulings,” Celebi said.

One has to realize that the OECD unionization ranking is as important as growth rates and current account deficits. In comparison to EU countries, Turkey’s standing is shameful.