In the wake of an explosion that killed 41 miners, several Turkish bodies are trading blame for safety failures in the coal industry. 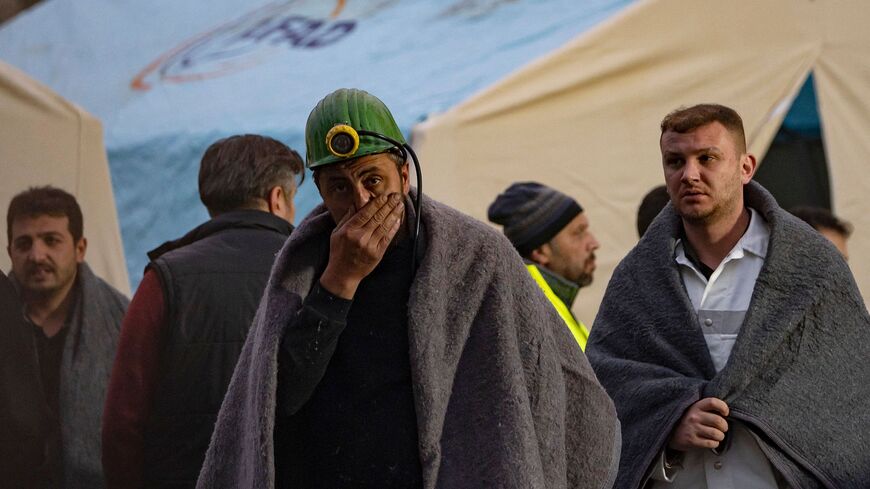 Relatives and friends of mine workers wait outside a coal mine after an explosion in Amasra, in Bartin province, Turkey, on Oct. 15, 2022. - YASIN AKGUL/AFP via Getty Images

ISTANBUL — The death of 41 miners in an underground explosion in northern Turkey has reopened the debate over workplace safety in the country.

The blast at the state-run Amasra coal mine in the Black Sea province of Bartin has revived memories of Turkey’s worst mining disaster eight years ago, when 301 miners were killed in a fire at a mine in Soma, western Turkey.

Following Friday’s disaster at the mine owned by the state-run Turkish Hard Coal Institution (TTK), opposition politicians produced a report from 2019 warning of risks at the site, where engineers said staff cuts had reduced safety inspections.

President Recep Tayyip Erdogan’s comments at the disaster site on Saturday also prompted questions about the official approach to industrial accidents. He appeared to characterize the explosion as an act of “fate” and said such events “will always happen.”

According to the International Labor Organization’s latest figures, Turkey ranks 15th among 83 countries in workplace deaths, with 6.3 fatalities per 100,000 workers.

The tragedy in Amasra was caused by firedamp — pockets of gas, usually methane — 300 to 350 meters (984 to 1,148 feet) below ground, according to initial assessments.

Prosecutors have launched an investigation into the blast but victims’ families said that dangerous conditions at the mine, including the leaking of volatile gases, had been well known before the explosion.

In a moment aired on TV at the funeral of one miner, a grieving woman told Erdogan that her brother had warned of gas leaks at the mine in the days leading up to the blast.

Opposition lawmakers from the center-left Republican People’s Party (CHP) shared details of a 2019 report from the Court of Accounts, which audits public bodies. The assessment said there were “serious accident risks” of firedamp explosions at the depth where the blast happened.

“The warnings are there,” he said, referring to the report. “It is clear what the workers said before the accident. Wherever you look, there is negligence. There is indifference.”

Agbaba said official statistics showed 53 miners died in accidents in the first nine months of 2022, adding that the TTK more than halved its workforce over 20 years, taking it from 18,025 in 2001 to 7,370 by last year.

The TTK said the claim about dangerous gas measurements was “completely false” and the high methane levels referred to gas in the coal itself rather than the mine. “Production in all our facilities is carried out in strict compliance with mining occupational health and safety rules,” the institution said in a statement.

The Union of Chambers of Turkish Engineers and Architects, meanwhile, said a reduction of staff numbers in the mining industry had resulted in inadequate inspections.

Emin Koramaz, the union’s head, described mining accidents around the country as “routine” due to a lack of technical expertise and equipment.

The Chamber of Mining Engineers said the “intervention of politics” in the running of mines, including the appointment of unqualified people, caused “numerous problems… and unfortunately this disaster has occurred.”

Energy Minister Fatih Donmez told parliament on Tuesday that the Amasra mine, which has been open since 1973, was last inspected in August and “nothing contrary to technical and administrative regulations was detected.”

Over the last 12 years, a third of the TTK's investment of 677 million liras ($36.4 million at Tuesday’s exchange rate) at its five facilities was earmarked for occupational safety, he added.

The minister said that if the investigation into the blast found “the slightest negligence, necessary action will be taken. The responsible person will be revealed. We will not hide anyone.”

Opposition lawmakers, however, reacted with outrage at the statement as well as Erdogan’s earlier comments.

“The attempt to legitimize arbitrariness, lawlessness and a lack of control by blaming them on fate is … the delusion of a political mind that does not value human life,” said Musavat Dervisoglu of the nationalist Iyi Party. “Those who run the state cannot escape responsibility by attributing their own faults and deficiencies to fate.”

Serpil Kemalbay, a lawmaker for the leftist People's Democratic Party, said the “murder of workers continues to shake us deeply and drown us in pain.” She said Erdogan was among those “responsible for these massacres" and "normalizes the deaths by calling them fate.”

CHP lawmaker Ozgur Ozel said 673 miners have died in Turkey since the Soma disaster in May 2014. He claimed that none of the recommendations of a parliamentary report into that incident had been implemented.