AKP government under fire over coal mine tragedy

Was the mine disaster in Turkey, which has claimed at least 283 lives, the result of flawed policies and negligent acts, or an inevitable accident? 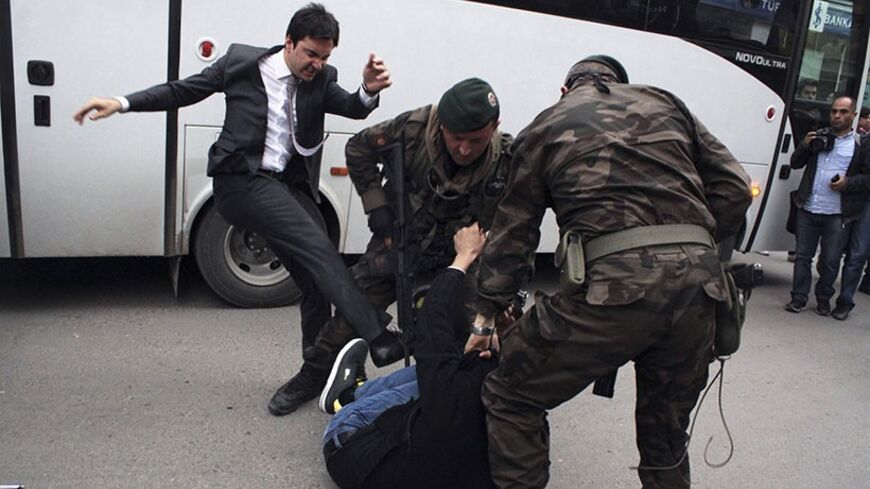 A protester is kicked by Yusuf Yerkel (L), adviser to Turkey's Prime Minister Recep Tayyip Erdogan, while special forces police officers detain him during a protest against Erdogan's visit to Soma, May 14, 2014. - REUTERS/Mehmet Emin Al/Depo Photos

Turkey is mourning the terrible disaster at a coal mine in the western mining town of Soma, where the death toll is approaching 300 amid fears it could eventually exceed 500. A three-day period of national mourning has been declared.

Furious protests greeted Prime Minister Recep Tayyip Erdogan when he visited Soma on May 14, with the anger spilling over across the country as dead bodies keep emerging from the mine.

The tragedy has triggered a heated debate on what caused the mayhem. Was it an inescapable accident? Or was it a combination of negligence and government policies that turned Soma into a mass grave?

Statistics compiled by the Worker Health and Safety Assembly suggest the accident is an outcome of Turkey’s chronic work safety problem. According to the figures, 1,235 workers were killed in 2013 and an additional 396 in the first four months of 2014.

Beyond the general problem of work safety, the mining industry stands out as a particularly deadly sector. According to the Radikal daily, Turkey had the largest number of deadly mining accidents in the world as of 2011.

The 2010 Work Accidents in the Mining Sector Report by the Turkish Mining Engineers’ Chamber suggests the Soma disaster was almost foretold. The report, which seems to have been completely disregarded, contains serious criticism and warnings about the government’s policies in the mining industry. The points it raises are largely shared by other nongovernmental groups and professional organizations involved in the sector.

The Turkish Union of Architects and Engineers Chambers (TMMOB) slams the privatization of mines and the overall policies regulating the sector: “The experience accumulated by mining enterprises over the years is being squandered as the industry is transferred to incompetent, ill-equipped and inexperienced individuals or companies. With their output plans aiming at high profits in the short term, production is being pushed to the limits to ensure quick and big earnings. Politically motivated appointments of unfit and incompetent people to key offices is coupled with a significant relaxation of government supervision. All these factors make accidents inevitable.”

The context of the Soma disaster emerges further with the remarks that the boss of the mine made in an interview back in 2012. Alp Gurkan — owner of Soma Holding, which acquired the mine in 2007 — boasted that his company had reduced production costs to $23.80 per ton of coal, down from the $130 to $140 the public operator had managed before privatization.

The private sector’s achievement of such a huge cost reduction is possible only through lowering standards, including those related to work safety.

The TMMOB report cites the following shortcomings that pave the way for accidents in mines: lack of proper and adequate ventilation systems, lack of back-up channels to ensure ventilation and exit when needed, lack of early warning systems against dangerous gas leaks, lack of first aid and evacuation facilities and lack of proper gas-measurement devices.

Reckless disregard of such warnings appears to have played a significant part in the Soma disaster.

The Electrical Engineers Chamber (EMO), which examined the mine immediately after the disaster, made the following observations: The systems designed to detect toxic and explosive gases and manage ventilation accordingly are obsolete and inadequate. In case of a fire, elevators are supposed to remain running through a backup power supply, but they stopped working after the power outage at the mine in Soma.

Furthermore, EMO has raised serious doubts over an alleged explosion in a power transformer, which was said to be the main cause of the disaster. The organization deems such explanations to be highly questionable, for transformers used in mines are supposed to be of high safety standards and have a fireproof concrete casing to isolate blazes. Thus, if the transformer did explode and manage to start a fire, one could no longer speak of an accident.

The coal mine in Soma had already come under the spotlight for various problems. Murat Cakir of the Worker Health and Safety Assembly says fires used to often break out in the facility.

Moreover, the problem of frequent deadly accidents in Soma’s mines came on parliament’s agenda only 20 days before the disaster. The ruling Justice and Development Party’s (AKP) deputies voted en masse to block a proposal for a parliamentary inquiry on the issue. The proposal, backed by all opposition members of parliament, had been submitted six months ago by a group of lawmakers from the opposition Republican People’s Party (CHP), led by Ozgur Ozel.

So, the ruling party seems to have recklessly turned a blind eye to an accident waiting to happen. Obviously, none of the concerns over the general state of the mining sector or the particular problems in Soma were taken seriously, and no measures were taken.

In Soma, Erdogan told journalists that he wanted "everybody to know that the disaster will be investigated in every aspect … and we are not going to allow any negligence, or leave any stone unturned." Time will show whether the Soma disaster was an inevitable accident, or the product of failed government policies and a chain of negligent acts.