While launching an investigation into the mine accident near Soma, Turkish Prime Minister Recep Tayyip Erdogan said mine accidents are "ordinary developments." 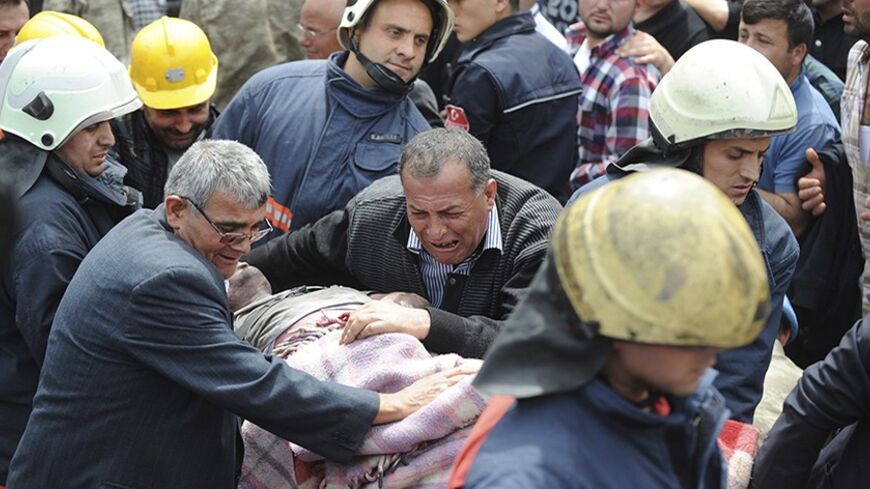 Rescuers carry a miner who sustained injuries after a mine explosion to an ambulance in Soma, a district in Turkey's western province of Manisa, May 14, 2014. - REUTERS/Gokhan Gungor/Depo Photos

At a coal mine near the town of Soma in Manisa province, 274 miners have reportedly been killed so far and about 120 others are still trapped underground after a fire of unknown origin broke out on May 13. Turkey’s Energy Minister Taner Yildiz said this disaster could potentially become the worst in Turkey’s history, signaling that the number of deaths could possibly pass the 1992 mine gas explosion that killed 263 miners near the Black Sea port of Zonguldak.

Turkey’s state-run Anatolia news agency reported that 3,000 miners have been killed and more than 100,000 wounded in work accidents since 1941 in Turkey. The Turkish Statistical Institute also shows in its last report that the most common labor accidents occur in mines and quarries. These accidents are mainly linked to poor safety conditions and improper inspection mechanisms.

Turkish Prime Minister Recep Tayyip Erdogan, however, said in a press briefing after visiting the accident zone on May 14 that the Soma mine had received a pass in March on security and health regulations. “Let’s please not pretend such incidents do not occur in mines,” Erdogan said. “These are ordinary developments. There is something like labor accidents in literature. This is part of the nature of this business.”

While Erdogan also announced that a judicial investigation into the Soma tragedy has already started, his approach to consider these accidents as being ordinary and referring to some accidents from the past received mix reactions. Some eventful protests have taken place in Istanbul and Ankara. Yet, this is not the first time Erdogan expressed this opinion. He also said in May 2010, after a mine explosion that killed 30 miners in Zonguldak, “Death is the fate of miners” — provoking many on social media to rally against Erdogan.

As if trying to disprove that it is not miners' fate to die underground, Turkey’s mass-circulated daily Posta reported on May 14 that as a leading coal-producing country, Germany has only seen three miners killed in the last two decades. “While all the mines in Germany are state-controlled, Turkey is turning over these mines to subcontractors and as a result the death toll triples,” it wrote.

Erdogan Kaymakci, head of the Zonguldak branch of the Union of Chambers of Turkish Engineers and Architects, told Al-Monitor, “Miners' health and well-being are pushed to secondary importance when these mines are privatized or subcontracted, as their primary concern is only about making more profit.” Kaymakci complained about those who express sheer sadness after the funerals take place. “We remember the condition of mine workers on days like this, but we have been trying to convince the authorities to improve the working standards based on the latest scientific work to no avail.”

Indeed, Turkey’s main opposition Republican People’s Party proposed a motion to be discussed at the General Assembly in October 2013 specifically drawing attention to the safety conditions of the Soma mine, asking a parliamentary inspection commission to be established. The other opposition parties — the Nationalist Action Party (MHP) and pro-Kurdish People’s Democracy Party (HDP) — supported the motion when it came to the floor on April 29. Images and videos have circulated on social media on May 14 showing the Justice and Development Party (AKP) deputies chatting to each other while CHP Manisa deputy Ozgur Ozel raised the issue of mining safety, brandishing a miner’s hard hat. AKP deputies rejected the motion.

Erdogan said in the May 14 news briefing that the CHP deputies proposed this motion only to change the country's agenda, and that there was nothing about Soma in that motion. However, the transcript of the parliamentarians discussing the issue on that day show there is reference to Soma 38 times. Filing this motion soon after a small fire took place in the same mine in Soma, CHP parliamentary group Deputy Chairman Akif Hamzacebi said, “We are requesting the formation of an investigation commission to look into the causes and reasons of the labor accidents and the deaths in the mine in Soma.” Muzaffer Yurttas, AKP Manisa deputy, however, fiercely objected to this motion, arguing that the opposition was trying to paint the ruling party as being against workers' rights, especially in the wake of the May Day celebrations, and argued that the AKP has brought nothing but freedom and democracy to the country, including to those wearing headscarves and the media.

All evidence points to this tragedy adding to the further polarization of the country, and that little or nothing will be done to improve working standards of miners. Still though, Erdogan announced three national days of mourning and ordered flags to fly at half-staff while the fear of a rising death toll remains.