The AKP mobilized 500 imams along with strict security measures to deal with the disaster-stricken mining town of Soma. 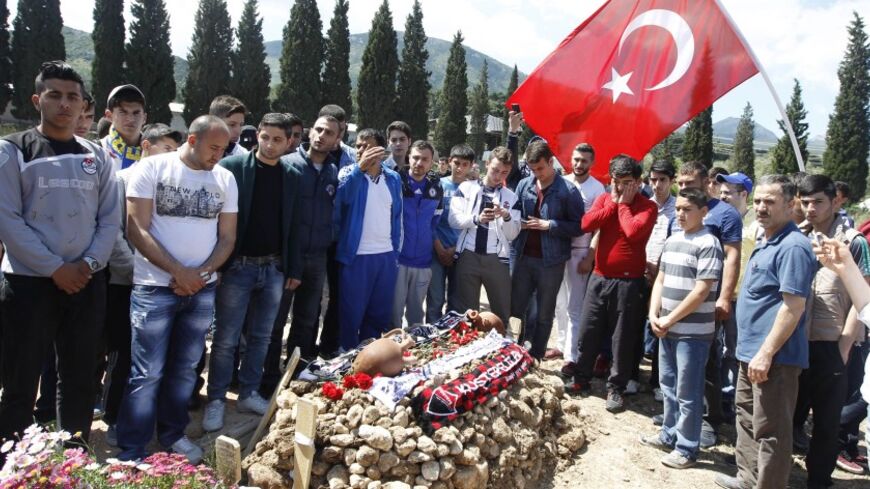 People mourn at graves for miners who died in Tuesday's mine disaster, at a cemetery in Soma, May 18, 2014. Turkish police have detained 18 people, including mining company executives, in the investigation into last week's mining disaster that killed 301, media reported Sunday. - REUTERS/Osman Orsal

“Waiting for death is the most difficult,” said a survivor of the Soma mining disaster. He was rescued within six to seven hours of the catastrophe and watched several of his coworkers die from the deadly gases. The survivor continued: “Some were shivering, others were saying shahadateen (Muslim prayer right before death), we prayed.” Every religion and culture has its rituals of respecting death. When the news of the Soma mine explosion broke, the government immediately deployed 80 imams from Manisa province (Soma is a town in Manisa). Ali Kenanoglu, head of the Hubyar Sultan Alevi Culture Association, penned a column for Evrensel daily explaining that the Directorate of Religious Affairs — operating under the prime minister’s office — assigned 500 imams to Soma along with 10 psychologists. The number raised concerns as the number of imams exceed the number of deaths, now put at 301.

In addition, Minister of Energy Taner Yildiz was seen on camera greeting a delegation of senior imams. These imams were members of a prominent religious group, Ismailaga Cemaati. Yeni Akit, a conservative daily, reported that Ismailaga Cemaati sent 50 imams to Soma. In addition, the Ministry of Education approved that the Imam Hatip (Religious Vocational) schools all around the country read the Quran and prayed for Soma victims and families. It was mind-boggling to view pro-government TV channels during the peak of search and rescue operations reporting the prayer sessions of various religious groups.

In the face of disaster, prayers are important, yet why did the Justice and Development Party (AKP) rush into sending an “army” of imams to Soma? In the news, it was reported that the imams were there to pray for the victims, with the victims’ families and to give sermons to the locals. Many locals told journalists that the imams told them, "Do not protest, remain calm and pray.” One local said, "They told us our loved ones are in heaven now and we should listen to the elders and leaders of the country. These are the AKP’s imams and we do not trust them. They are sent here by the government and for their own salary they are abusing religion.”

However, not all members of religious groups or civil society organizations were allowed to enter into Soma and some reported threats if they persisted in trying. The city was cordoned off by security forces. MAZLUMDER (The Association for Human Rights and Solidarity for the Oppressed) reported several of its members could not enter Soma for days. MAZLUMDER is one the oldest Islamic associations and is most well known for its determined battle against the headscarf ban. Following the Soma disaster, the group asked the government difficult and unpleasant questions. In the midst of such grief, social media witnessed yet again another fault line between Gulen movement-associated groups, groups that try to stay neutral and the AKP.

Why did the AKP send an army of imams to Soma? Families of miners, people of Soma and indeed millions in Turkey are mourning. If you can accept a death as destiny, as something accidental that could not have been prevented even under the best of circumstances, it is perhaps more palatable to accept it and mourn quietly.

Since the army of imams has not been completely effective in calming people and keeping them off the streets, the government has utilized its security forces in full and brought in reinforcements from neighboring provinces. Several lawyers, along with protesters, have been detained; many were injured by water and gas cannons. Finally, all journalists who did not have the government-issued official press card were asked to leave town. This was referred to as a “gag order” because the government has much to hide in Soma. That said, all around the country protests were intense and just like in the Gezi protests, excessive police brutality was reported.

The Soma incident is critical for the AKP because the town favored — with 43% of its vote — the AKP in March 30 local elections. During the campaign, truckloads of miners with their work gear were brought to cheer at AKP rallies, and now they have gone on record as saying, “Those who refused to attend the rallies were fired.” Either way, at least on paper, the town was seen as an AKP stronghold. Now the AKP faces a new reality: It is difficult to brand Soma residents as being “marginal,” “members of terror organizations” or “traitors.” Hence, at least three separate groups’ discontent with the government is visible:

The last group is sometimes referred as “liberals” in Turkish rhetoric as well. The Soma disaster cuts through all official rhetoric that several “lobbies” are in a coup attempt against Erdogan. It demonstrates the deep vulnerabilities of the AKP, which prides itself on the country's economic progress.

Only nine months ago, on July 10, 2013, the energy minister had visited the Soma coal mines. Going down into the mine with his sparking white gown and helmet, the minister had two important statements: “Nothing is more important than the safety of our workers, and the Soma mines are an example for the rest of the country.” Then he added, “Maybe the money my mining brothers here earn is more halal (acceptable by Islam) than the money I earn.” Now, the town's mourning residents not silenced by the power of prayer have been booing AKP delegations, and particularly when Erdogan walked around town saying, “This is the nature of the beast in mining, death on duty is destiny.” Then he ordered the authorities to declare “the victims are civilian martyrs.” After Erdogan waved his index finger, angry at protesters, and said, “If you boo the Prime Minister, you will get slapped,” it was poignant to see one resident replying, “Yes, of course, prime minister, we will, yes, but we are in excruciating pain.”

An official declaration that the Soma victims are “civilian martyrs” can be viewed as a hopeful step for the mourners; however, state-sanctioned declarations do not necessarily guarantee martyrdom in Islam. Those who await death in the mines may resort to religion as a comfort, but those alive seek an explanation from the AKP, which has a track record of escaping accountability.