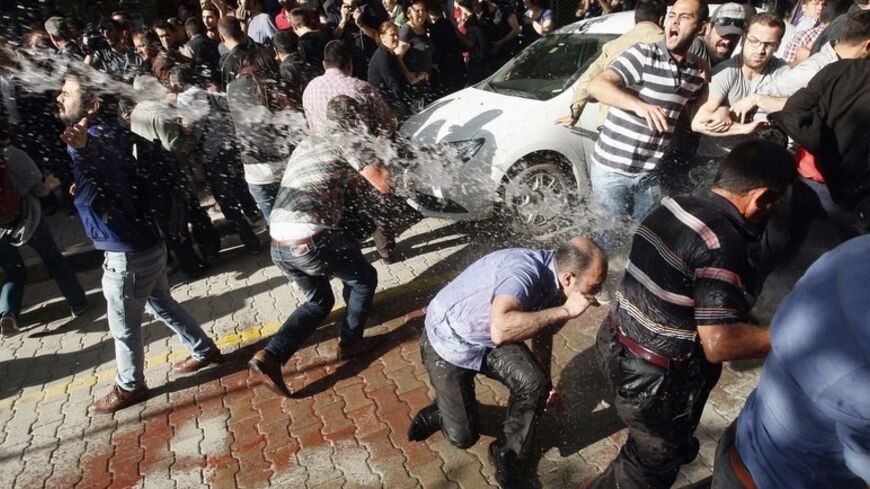 Police use water cannons against protesters as they demonstrate against the ruling Justice and Development Party (AKP) government over the mining disaster in Soma, a district in Turkey's western province of Manisa, May 16, 2014. - REUTERS/Stringer

The most emotional photograph from the Soma mine disaster was of a rescued miner covered all in black laid on a stretcher. His rescuer wished him good luck, and the miner said, “Should I remove my boots, so they do not dirty the stretcher?” Millions of Turks cried watching this scene. In the midst of tragedy, to see a survivor worrying about “dirtying the stretcher” was a heart-stabbing moment.

Within 24 hours of this incident another young man made the news from Soma. Yusuf Yerkel, an aide to Turkish Prime Minister Recep Tayyip Erdogan, was caught on camera kicking a man. The prime minister’s convoy was met with angry protesters in Soma. The cars were “attacked” by local youth who were chanting, “Erdogan resign.” At one point, a protester allegedly used expletives, which is when Yerkel lost his cool and attacked the man. One minor detail is that two policemen already had subdued the protester when Yerkel began to kick him.

Yerkel is one of the youngest on Erdogan’s team. He was a research assistant at SETA (Foundation for Political, Economic and Social Research) and has some postgraduate education at the University of London’s School of Oriental and African Studies (SOAS). The images shook social media so strongly that a campaign was launched to complain about Yerkel to SOAS. SOAS publicly announced that Yerkel is no longer registered at their school. However, this campaign is an indication of how desperate Turks were “to react” toward such cruelty.

This was the first time in modern Turkish history that a Turkish bureaucrat attacked a private citizen in the public eye. That is, until news broke on May 15 that Erdogan himself allegedly punched one of the protesters. Erdogan had gone on record during a speech in Soma, declaring the protesters of the mining disaster as “reprobate and immoral.” To top this angry rhetoric, along with tens of his bodyguards, Erdogan entered a supermarket where he was recorded punching a young man. Then, we see the bodyguards beating the victim. Before the punching, we hear Erdogan shouting at the victim, “Why are you running away? Come here, you were just telling me to resign.” Some in social media also claim Erdogan is saying, “Why are you running away, you Israeli seed?”

The victim of Erdogan’s punch appeared on TV and said, “I was not one of the protesters but just a customer of the store. I believe the prime minister slapped me involuntarily. He could not control his emotions and took it out on me. It was an unfortunate event, but I do not think he did it on purpose. Then, the bodyguards beat me up and I fell down by the freezer.” The victim added that he hopes they regret their actions. The prime minister’s office has not yet commented on the matter. However, his aide Yerkel issued a statement about his own aggressive behavior, which was translated as an apology by Anatolian Agency’s English Twitter feed, yet in the Turkish version remains: “I am sad, I could not preserve my calm.”

This “regret” was insufficient for many. The co-chairman of the People’s Democracy Party (HDP), Ozgur Muftuoglu, informed Al-Monitor that his party had put in an official parliamentary inquiry to learn whether Yerkel will be removed from his position. In addition, the main opposition party, the Republican People’s Party (CHP), requested a parliamentary inquiry: “What are the official duties of your aide, and why was he in Soma?”

HDP’s Muftuoglu told Al-Monitor, “What has happened in Soma mine is not an accident but a disaster due to negligence of working conditions, and the strong drive for higher financial gain.” Muftuoglu explained that not just the people of Soma, but millions around the country, are so appalled about the fact that this disaster was preventable.” He said, “People want to know the truth behind the events of Soma and their anger would deepen if this demand is not met.”

A prominent parliamentarian from the CHP, Umut Oran, echoed a similar concern. He told Al-Monitor, “I fear those around Erdogan tend to imitate him. I am not surprised to see someone with the bureaucratic title of 'adviser' acting like a bodyguard or militia next to the prime minister, signaling the deep roots of despotic and fascist culture. I do hope that gradually the people see the real face of the ruling elite.”

In a sense, Oran has a point, as the Turkish parliament witnesses physical and violent fights between parliamentarians. A Google search for "fight at Turkish parliament," in Turkish, leads to 1.5 million hits. It is a common joke within parliament’s corridors that to survive the debates each party should reserve a couple of seats for former boxers and husky men.

The Justice and Development Party (AKP) rule of a decade can be viewed as a steady trend of “normalization” for the macho rhetoric. AKP members do not always engage in verbal and physical engagements with their opponents. Over the years, several rumors have spread that Erdogan offended his ministers verbally and even attacked some of them physically. It would be fair to say that Erdogan and AKP elites believe Erdogan has to appear strong in this fight — the more macho he appears the more his base will be consolidated. However, these unchecked temper tantrums have incrementally intensified in rhetoric, and now we can see it in public domain. This is a rather alarming point, as now we witness a no holds barred sort of attitude from the ruling elite.

Vural Ergul, a renowned attorney, told Al-Monitor, “The shield AKP elites had formed around themselves, particularly for Erdogan, is so thick that they have no humanitarian or legal concerns about the consequences of their actions.” This behavior could easily spiral, as one pro-AKP troll tweets, “I cannot see Erdogan has punched anyone, if he has good for him, if he has not, he could just point us the target, and we will take care of it with pleasure.”

It has been an accepted fact — even by Erdogan himself — that he has a rather low threshold for criticism. His reaction to criticism has changed for the worse: from social lynching to aggressive assaults. While even excessive use of force by the police against unarmed protesters cannot be effectively prosecuted in Turkey, now the bureaucrats are directly confronting ordinary citizens: Who can protect them? Will the political elites be held legally accountable for these violent acts? There can be many excuses for aggressive behavior, but in these cases, there is no validation that Yerkel or Erdogan were acting in self-defense. Were their lives really threatened by the slogans of “Erdogan resign”?

In case you were wondering, the miner, who didn’t want to dirty the ambulance, did take off his boots, and they were lost in the commotion. He hopes that the mining company will not deduct the cost of the lost boots from his salary. In Turkey, while powerful men get away with aggressive behavior, the poor have to worry about such petty matters, even when they are laid on a stretcher.