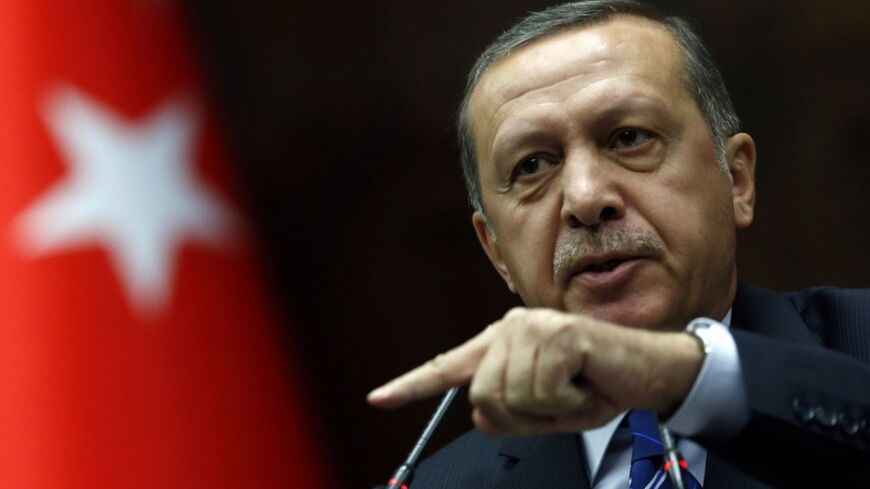 Turkey's Prime Minister Recep Tayyip Erdogan addresses members of parliament from his ruling Justice and Development Party (AKP) during a meeting at the Turkish parliament in Ankara, April 29, 2014. - REUTERS/Umit Bektas

The March 30 local elections in Turkey were not really local elections but a de facto referendum on Prime Minister Recep Tayyip Erdogan’s ability to govern the country. The outcome came as “a kiss of life” for Erdogan, whose legitimacy had been in a downward spiral since May 2013 when his authoritarian attitudes fanned the Gezi Park revolt. His legitimacy took a further blow with the massive corruption probe in December, which came coupled with a slew of wiretaps leaked on the Internet that exposed the government’s dirty affairs.

But despite those enormous setbacks, the popular support lost by Erdogan in the March 30 elections was less than expected. His party had garnered some 50% of the vote in the 2011 general elections. At the local polls, the party mustered 43.3% in the municipal assemblies’ vote — the only criteria that allows for a comparison — meaning that its popularity declined only by about six percentage points.

Prior to the polls, the Gezi Park events and the ensuing corruption scandal had nourished an impression — both at home and abroad — that Erdogan’s days were numbered. But the election results showed that Erdogan is here to stay.

Prior to the polls, a wide range of dynamics — economic fragility, social polarization, the government’s conflict with the Gulen movement, its deadlocked foreign policy and international isolation — were all negative. The election result came as a “lifesaver” that psychologically relieved the beleaguered government and boosted its self-confidence. The government was now armed with the “legitimacy of the ballot box” to counter the loss of legitimacy it had suffered over the Gezi Park events and the corruption scandal.

The March 30 results revived Erdogan’s presidential prospects, which were widely considered to be dead prior to the polls.

But even though Erdogan’s election victory seems to have smoothed his political route ahead, it has failed to improve the negative dynamics mentioned above. All those grave problems remain intact despite the electoral boost he got.

What is more, Erdogan’s deficiencies in democracy, freedom and the rule of law are far from diminishing and seem to be getting even worse. The latest example came in the form of an authoritarian law, approved on April 25 by President Abdullah Gul, which gives the National Intelligence Organization (MIT) extraordinary powers over citizens and institutions, while minimizing its accountability and control.

Erdogan’s electoral boost has resulted also in a tangible increase in media censorship and pressure to silence critical journalists.

Many of the problems and adverse dynamics besieging Erdogan arise mostly from Erdogan himself. Similarly, his authoritarian policies are the primary source of Turkey’s shortcomings in democracy, freedom and rule of law.

In sum, one can conclude that Erdogan had become Turkey’s biggest problem long before the Gezi revolt, and that the March 30 elections indirectly amplified that problem, with Erdogan failing to produce solutions to the trouble he himself creates.

At the helm of a vibrant and fast-changing Turkey for as many as 12 years, Erdogan has completely lost his problem-solving capability since the Gezi revolt. His authoritarian and arbitrary approach to the problems he personally creates or exacerbates makes him the root of the problem itself. Yet, Erdogan keeps aggravating the problems and generating conflict because power makes him even more overbearing, intolerant and hubristic. The relief his government got from the March 30 outcome, it seems, will be short-lived.

On May 10, a ceremony for the 146th anniversary of the Council of State demonstrated anew that Turkey’s strongest man is its biggest problem, exposing all anomalies of the regime in an episode overladen with symbolism. Each and every moment of the drama that unfolded in Ankara underscored that Turkey is going through extraordinary times.

Gul, Erdogan, cabinet ministers, Chief of General Staff Necdet Ozel and main opposition leader Kemal Kilicdaroglu were all seated in the front row when the head of the Union of Turkish Bar Associations, Metin Feyzioglu, took the floor. Feyzioglu began speaking by addressing the president — a show of respect to the highest-level statesman in presence. But his speech, lasting an unusual 50 minutes, was directed at Erdogan, raising the problems the premier was responsible for: crippled press freedoms, social media bans, restrictions on May Day celebrations, the MIT law, the eradication of judicial independence and the blocking of corruption probes.

Only 15 days earlier, Erdogan had faced similar criticism from Constitutional Court President Hasim Kilic, who denounced the prime minister’s and his government’s unlawful practices at a ceremony marking the tribunal’s 52nd anniversary. Erdogan and his ministers did not spare Kilic, but they waited for the ceremony to end to vent their anger.

At the Council of State, however, Erdogan’s angry shouts startled the audience just as Feyzioglu was concluding his speech. The premier was accusing the head of the bar associations of lying, ill-manners and abusing his speaking time. Gul was tugging on Erdogan’s hand, trying to calm him down.

As Feyzioglu finished his sentence, Erdogan rose from his seat and moved toward the rostrum, still shouting. Then, he turned back and gesticulated to Gul that they should leave, showing the door. While Erdogan and his aides left the hall, Gul and his entourage, who had also stood up, followed suit, joined by the army chief.

Normally, a prime minister rising from his seat and shouting at the speaker in the presence of the president — the constitutional head of the state and the executive — would have been only a show of force shattering the state protocol. But what made things worse was the prime minister inviting the president out and Gul heeding the call.

The walkout was a visual illustration of how the state protocol and hierarchy has collapsed, giving way to the real political hierarchy — the one of the “one-man regime” — in a thought-provoking show directed by Erdogan himself.

Most recently, Turkey’s Erdogan problem erupted not in an auditorium but in the streets. On May 14, protests greeted Erdogan when he visited the western town of Soma, where Turkey’s deadliest mining disaster had occurred the previous day. With the death toll climbing to 200 that day, it was only natural for Soma’s people to call the government to account for the poor supervision and negligence that caused the disaster. Moreover, in the speech he made there Erdogan implied that the grieving families should accept the tragedy as natural, arguing that death was inherent in the mining industry and citing examples of fatal accidents dating back to the 19th century. In remarks at a press conference, he also used the term “exitus cases” for the men who perished in the coal mine.

Erdogan’s comments were bound to fuel anger, as Soma’s pain was still raw. And indeed, when he emerged in the streets he faced booing and resignation calls, which forced his bodyguards to lead him into a supermarket. In the evening, the news broke that inside the supermarket, the Turkish republic’s prime minister had slapped a citizen of his country in the face.

A young man, Taner Kuruca, claimed he had come for shopping when he suddenly came face to face with the prime minister, who gave him a slap. He added he was not planning to sue Erdogan. Footage of the incident clearly shows Erdogan grabbing Kuruca by the neck with both hands and saying “Where are you running!” His bodyguards are then seen brutally beating the man.

In the meantime, another image from Soma made the rounds across the world, showing Erdogan’s adviser Yusuf Yerkel kicking a protester already overpowered on the ground by two special-forces police.

Erdogan’s callous, intolerant, arrogant and detached response to protests and criticism — supposedly the most natural freedoms in a democracy — show that Turkey’s biggest problem is growing even bigger.