Can Erdogan survive Soma mine tragedy?

The Soma mine disaster might be the incident to finally damage the prime minister's presidential aspirations. 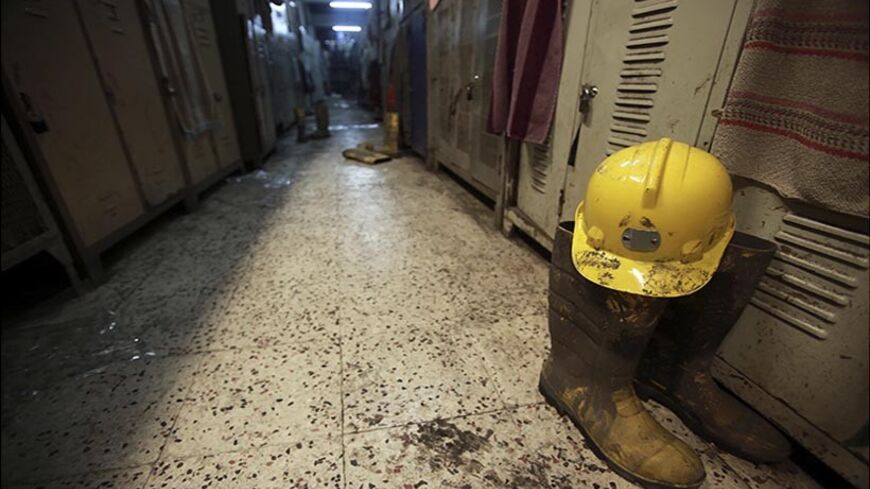 A boot and a helmet are seen in a changing room used by coal miners after the mining disaster in Soma, May 14, 2014. - REUTERS

Only a week ago, I wrote, “There is never a dull moment in Turkey.” My inspiration at the time was the drama of the prime minister stalking out of a solemn, official event. He lost his control, stood up and yelled at the speaker, who happened to be the chairman of the Union of Turkish Bar Associations. All this drama took place in front of the president and was televised live.

After less than a week, I need to add a new dictum: “Impossibility is impossible in today’s Turkey.” During a visit to the western Turkish town of Soma, where hundreds of miners lost their lives in a disaster mourned by the entire nation, Prime Minister Recep Tayyip Erdogan was caught on video seemingly striking a young miner inside a shop. Erdogan was forced to take refuge in a supermarket when confronted by an angry crowd calling for his resignation.

This has to be unprecedented in history. But it seems these events happened in Turkey, and the incident became public knowledge when video of the altercation was dispersed on social media. The victim of the alleged attack appeared on Kanal D, one of Turkey’s major TV networks. He said he wasn’t angry with the prime minister, who didn’t mean to do it, and that his real anger was with the bodyguards. He asked only for an apology from the prime minister.

An apology might be enough for the young Soma laborer, but since the prime minister is preparing to run for president and needs votes, the Turkish public needs more than a personal apology.

Before the news spread of the prime minister supposedly slapping a mourner in a shop, a photograph of his aide Yusuf Yerkel — an unknown figure up to that point — kicking a mourner, already pinned to the ground, generated public fury of extraordinary proportions.

Combined with the fuzzy footage of Erdogan’s alleged slap, the photos of his aide kicking this unfortunate man have added insult to injury.

A weird mood surrounds the ruling party and its followers. As the demonstrations protesting the disaster at Soma assume dimensions reminiscent of the Taksim-Gezi protests — whose first anniversary is coming up in two weeks — government circles appear to have lost their heads, even labeling the Soma disaster “a plot against the state.”

Every event is being made political in a country where politicization and tensions are already peaking around the elections, and this is what happened with the Soma tragedy.

Erdogan has been expected to announce his candidacy for the presidential election, but as Reuters reminds us, “His handling of a disaster hitting the sort of working-class, conservative community which makes up the core of his supporter base is further evidence, his opponents say, that he is a leader increasingly out of touch."

As many, including German President Joachim Gauck, have experienced Erdogan’s confrontational attitude, it was no surprise that the German press printed strong reactions mixed with wishes of that Erdogan would lose his political standing. Der Spiegel reported the Soma events under the headline “Scher dich zum Teufel, Erdogan” (“Go to hell, Erdogan”).

Frankfurter Rundschau reported, “The government of Recep Tayyip Erdogan reacted to criticisms of a lack of worker safety in the country, voiced by labor unions and the opposition, by deferring to existing worker safety laws and the fateful acts of God — as well as by pursuing a ruthless privatization of public properties. Should the accusations against the ownership of the Soma mines be substantiated, the accident will cause Erdogan more distress than all allegations of corruption. Since no one in Turkey can secure a contract without approval from above, any violations fall back on the boss himself. The corruption scandal did not bother Erdogan voters, but the death of workers will."

From Frankfurter Allgemeine Zeitung came, “In Turkey, this is the highest number of deaths in a work accident. … Even if Turkey has tripled its per capita income in 10 years, it became instantly obvious that this wasn’t all that great a progress.”

From Britain, The Guardian ran a photograph captioned, “Yusuf Yerkel kicks a protester already held by special forces,” saying, “The prime minister's office distanced itself from the incident, with one official saying the issue was Yerkel's ‘own personal matter,’” but "Erdogan's speech during a visit to the mine was widely seen to be grossly insensitive.”

The Guardian reported that Erdogan might not make it to the presidential palace after the Soma disaster in a report headlined, “Miners and mourners scorn government that 'laughs at our pain.'”

On May 17, The Economist predicted, “The tragedy in Soma will also be felt in politics,” writing, “Turkey's prime minister, Recep Tayyip Erdogan, faces public fury after the country’s worst-ever industrial accident. … The disaster may yet unleash more mass protests of the kind that rocked Turkey last summer. … All this is unwelcome news for Mr. Erdogan who, buoyed by [the Justice and Development Party]’s big win in the March 30 local elections, has set his sights on the Turkish presidency when it comes up for grabs in August.”

These are all rational commentaries from credible Western media outlets that could mold international public opinion on Turkey and its prime minister. But let us stop there. Turkey has a prime minister who lets his nerves guide him with no control over his fury. He is, by nature, an already very nervous personality. Yet such traits have not inhibited his ambitions or his recent tenacity. The Washington Post gave probably the most accurate assessment of him:

“Turkey’s prime minister — a man the entire country expects to soon jump into the presidential campaign — should be on the defensive after being forced to seek shelter from angry demonstrators in a supermarket. Not Recep Tayyip Erdogan.”

His motto is that the best defense is a good offense. Thus, it seems the days ahead in Turkey will hold more tension and unrest. Unfortunately, predictions that Turkey's near future bodes more instability even after Erdogan’s electoral victory on March 30 seem to be on the mark.