Erdogan outburst: 'This is indecency!'

Turkish Prime Minister Recep Tayyip Erdogan lashes out at the chairman of the Union of Bar Associations of Turkey during a state event. 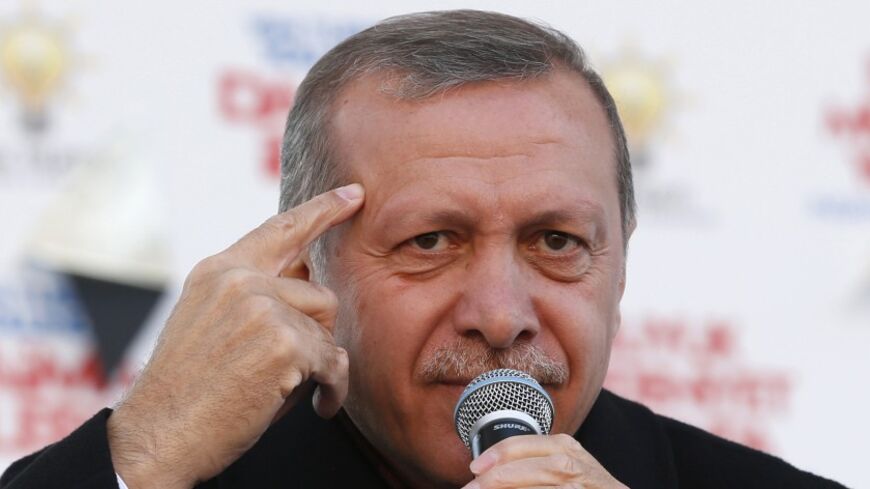 Turkish Prime Minister Recep Tayyip Erdogan speaks during an election rally of his ruling Justice and Development Party (AKP) in Istanbul, March 29, 2014. An analyst said Erdogan's reaction to a speech on Saturday showed he had won at the ballot box but lost to himself. - REUTERS/Murad Sezer

The phrase “never a dull moment” is probably meant to describe Turkey. Indeed, for Turkey’s observers, whether they are veteran political figures carefully monitoring the developments from outside or those foreign residents belonging to expatriate journalist community, “There is never a dull moment in Turkey” is a consensus motto.

The weekends are not exempt. They could even be more electrified in the political sense as Saturday, May 10, proved to be. The news bombshell fell to smart phones as text messages and those Turks who rushed to their TV screens witnessed an unprecedented drama unfolding: Prime Minister Recep Tayyip Erdogan was stalking out of the hall dragging President Abdullah Gul, who was sitting on his left, and four-star Chief of General Staff Necdet Ozel, sitting on his right, behind him while shouting "This is indecency!" to professor Metin Feyzioglu, chairman of the Union of Bar Associations of Turkey, who was then addressing the meeting.

The venue was a gathering of the highest level of Turkish officialdom to observe the 146th anniversary of the founding of the State Council. It would be an understatement to say that Feyzioglu’s nearly hourlong speech, laden with criticisms of the government, had angered Erdogan. He was in a raving mood. When he started to heckle the speaker from his seat, millions of Turks saw on their TV screens how Gul tried to quiet him down by tugging on his sleeve and how Erdogan’s irritation became enraged fury. Erdogan could not be stopped from jumping to his feet and continuing to yell at the chairman of the Union of Bar Associations, whose speech was supposed to take 20 minutes. People around Erdogan were worried that he might storm the rostrum.

Reuters reported, “It was an unusual outburst even for Erdogan, Turkey's most popular leader in a half-century, whose street-tough origins and hard talk are part of his appeal for many Turks.”

It added: “The dramatic scene underscored how tensions remain high after bitterly contested March local polls and amid expectations Erdogan will seek the presidency in another election in August.”

The incident immediately became a hot topic of Turkey’s perpetual political and social polarization. Erdogan’s partisans, who flooded the social media with tweets led by Minister of Justice Bekir Bozdag, turned their guns on Feyzioglu and declared that Erdogan had taken a "heroic" stand against alleged "judicial coup attempts."

Even more colorful was the way Erdogan supporters recalled how on Jan. 30, 2009, he had lashed out at Israeli President Shimon Peres and walked out from a panel he was participating in with UN Secretary-General Ban Ki-moon and Arab League Secretary-General Amr Moussa at the annual World Economic Forum at Davos.

That dramatic Davos episode — which still bears on Turkey-Israel relations in a way — was repeated in Ankara. One of the protagonists was the same person: Erdogan. In lieu of Peres, there was a young and bright Feyzioglu, a scion of a prominent political family who is a registered member of the main opposition Republican People's Party (CHP), and who made his reputation with his defense of military officers imprisoned for years. It did not take long for the episode to be labeled “the second Davos.”

But Davos 2009 was accorded a national consensus of majority approval. As Israel’s Operation Cast Lead against Gaza at the time with Davos was bitterly denounced by the Turkish public, Erdogan’s unprecedented and harsh polemics with Peres gained him the general approval of Turks.

This time, however, the “second Davos event” or “the local Davos event" — as much support that it garnered from Justice and Development Party (AKP) partisans — also attracted heavy criticism from an ever-increasing number of his opponents. The most modest criticism was that the prime minister was bereft of anger management. His performance in front of the head of state, Gul — who played the role of bodyguard trying to break up a fight — was criticized as a “protocol scandal.” The incident also had an adverse consequence for Gul's image by creating the impression that Erdogan was the decision-maker.

Dogan Akin, the editor-in-chief of the T24 Internet site that is becoming the outstanding digital mouthpiece of Turkey, said Gul was not surprised by Erdogan’s behavior but was upset by it. He wrote: “Remember what Gul said in an interview with Hurriyet in July 2006 when he was the foreign minister? He had shared private information about the personality of Erdogan and their relationship. To the question, 'Do you sometimes warn the prime minister not to get angry?' Gul had replied: 'Frequently. In our meetings with foreigners I warn him with my hands and even with my feet. For example, in a meeting in Brussels on Dec. 17, we stepped on each other’s feet a lot under the table.'

“This time even Gul couldn’t rein in Erdogan. After Erdogan shouted, 'This is indecency!' Gul was visibly uncomfortable along with other members of protocol. First, he tried to calm Erdogan without getting up. Then, when Erdogan’s behavior went beyond words and manifested itself also in body language, Gul bowed his head almost in embarrassment. Can you say that a prime minister shouting out 'indecency' was behaving correctly and decently to the president and others in the State Council hall?

Last month, when the head of the Constitutional Court denounced Erdogan and his government, Erdogan remained stony silent in the hall. But in the aftermath, the head of the Constitutional Court, Supreme Justice Hasim Kilic, was subjected to venomous criticism from Erdogan and his followers. Then on Saturday, the formerly stony silent Erdogan erupted like a volcano on Feyzioglu, reflecting the fury of the executive about the judiciary.

Feyzioglu did not budge. At a news conference later in the day responding to Erdogan’s criticism that he had abused his talking time, Feyzioglu said, "Yes, I prolonged my talk. For 365 days a year whoever turns on TV in Turkey sees Erdogan for 24 hours. We speak twice a year. Let them refrain from illegalities, then we won’t speak long."

It is understood that the vision offered by the prime minister will remain as legitimate evidence of those pointing to his authoritarian tendencies and his rapidly becoming an autocrat.

Of course, since there is never a dull moment in Turkey, that will be the case until a new drama unfolds and replaces the previous one. There will be no shortage of them. For sure, Erdogan will provide more and more as the presidential race nears.