Turkey’s new president's statements indicate that he is preparing for an assault on the judiciary. 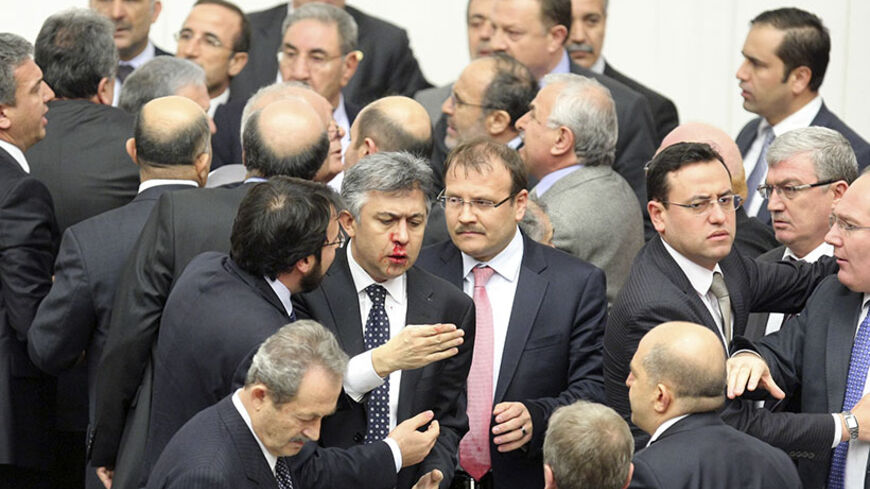 Members of parliament in Ankara scuffle during a debate on a draft law that would give the government tighter control over the appointment of judges and prosecutors, Feb. 15, 2014. - REUTERS

In a farewell speech at his party’s Aug. 27 convention, Turkey’s President-elect Recep Tayyip Erdogan lashed out at the High Court of Appeals. The speech provided insight into Erdogan's state of mind and what is in store for the country in the coming days.

Erdogan, infuriated by a decision of the High Court of Appeals, branded the judges “assassins,” referring to the Ismaili order that branched off from Shiism in the 11th century and became notorious for its political assassinations.

Erdogan typically uses this term to vilify members of the Gulen movement, his former ally. Tensions between Erdogan and the Gulenists erupted into a fierce war on Dec. 17, 2013, when police and prosecutors targeted Erdogan’s ministers and cronies in a large-scale corruption probe. Erdogan claimed that Gulenists entrenched in the police and judiciary were plotting to unseat his government — a theory he continues to propagate while never addressing the fraud allegations. For Erdogan, the Gulen movement’s sympathizers in the bureaucracy form a “parallel state.” As a result of the massive purge Erdogan instigated against the “parallel state” over the corruption probe, hundreds of judges and prosecutors and thousands of police officers were reshuffled, with some landing behind bars on charges of illegal wiretapping and espionage.

By describing the judges of the High Court of Appeals as "assassins," Erdogan is demonstrating how the "parallel state" narrative has become a catch-all weapon to smear critics and those with potential clout to limit his power.

Erdogan’s fury at the High Court of Appeals erupted on Sept. 1 during ceremonies that annually mark the beginning of the new judicial year. Typically, the president, the prime minister and other senior state officials​ attend a gathering at the court, where the court's president and others — like the heads of other top courts and the chair of the Turkish Bar Association (TBB) — make speeches. The president, the prime minister and ministers attend only as listeners.

The statement signaled Erdogan’s enduring grudge at the TBB chairman, following a tense episode that unfolded between the two on May 10. In a speech at a gathering held by another top court, the Council of State, TBB chairman Metin Feyzioglu harshly criticized the government for restricting rights and freedoms, all the while staring at Erdogan and then-President Abdullah Gul seated in the front row. As Feyzioglu wrapped up his speech, Erdogan rose from his seat and shouted, “This is indecency. Enough is enough!” Erdogan said Feyzioglu distorted the facts when he spoke of how the victims of the 2011 earthquake in Van were still haunted by problems. He dismissed the criticism as political propaganda. Feyzioglu responded: “I’m not being indecent. And I would never allow myself to call someone else indecent.” The incensed Erdogan then walked out of the room, followed by the president and the chief of the general staff.

Later that day, Erdogan addressed a party meeting in Afyon: “Today we listened to a jurist, supposedly a professor. But no matter what title you have, you are worthy of nothing if you can’t digest your title, can’t speak properly and base your speech on dishonest remarks. … If you are so fond of politics, then go ahead and take off your robe.”

Erdogan’s anger with the TBB chairman still appears to be bubbling, judging by his refusal to attend a gathering Feyzioglu is scheduled to address and his call on the hosts to prevent the jurist from speaking. Following Erdogan’s remarks, the High Court of Appeals’ board convened to discuss a course of action. Erdogan did not expect their decision.

The court’s statement read: “The judicial year inauguration ceremonies, a 71-year tradition, mark a very important day of honor for the judiciary on which the judicial system’s outstanding problems are shared with the public and views and opinions are publicly conveyed to the other organs of the state. We place great importance on the attendance of the president and other representatives of the executive. To end the bar association chair’s address at the … ceremonies is unacceptable in a contemporary democratic state based on the rule of law and the principle of the separation of powers. … [S]uch a move would constitute a violation of freedom of expression under Article 10 of the European Convention of Human Rights and Articles 25 and 26 of the Republic of Turkey Constitution. Accordingly, a decision has been made to reserve speaking time for the TBB chair on the program of the 2014-2015 judicial year inauguration ceremony.”

The decision seems to have diverted Erdogan’s fury from Feyzioglu to the High Court of Appeals. Erdogan's Aug. 27 remarks show that the court will be henceforth in his firing range. “Can you imagine the High Court of Appeals [displaying] such rude behavior to [someone who is both] a politician and a president elected directly by the people? This is a habit that belongs to old Turkey,” he said.

In a previous article for Al-Monitor, I wrote that Turkey’s top courts played an important role in restraining Erdogan’s authoritarian tilt, and that severe tensions between Erdogan and the senior judiciary were in store for Turkey. We now see that the tensions have erupted earlier than expected and are bound to escalate in the coming days. Erdogan’s onslaught on senior judges with insults such as “assassins” — all because his capricious wish was rejected — is an omen. Turkey’s top courts are right in the center of Erdogan’s radar, bracing for bombing raids.