Defeating a pro-government incumbent, Ankara Bar Association Chair Erinc Sagkan was elected head of the Union of Turkish Bar Associations on Sunday, pledging to strengthen the rule of law and independence in Turkey’s legal profession. 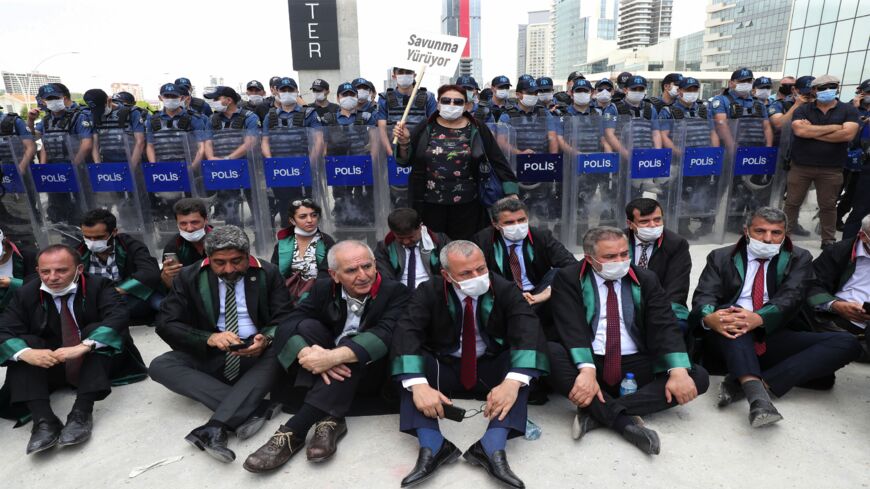 Senior lawyers protesting against a draft bill governing the organization of bar associations sit on the ground during a rally in front of Turkish riot policemen blocking the road, in Ankara on June 22, 2020. Lawyers claim that the draft bill is aimed at silencing those critical of the government. - ADEM ALTAN/AFP via Getty Images

ISTANBUL — After repeated postponements and the passing of a controversial law on bar associations that prompted some lawyers to march from Istanbul to Ankara in protest last year, the influential Union of Turkish Bar Associations (TBB) held elections this weekend and ousted its president of eight years, Metin Feyzioglu.

In the latter part of his tenure, Feyzioglu came under increased criticism for seemingly accommodating the political agenda of Turkey’s ruling Justice and Development Party (AKP).

Feyzioglu notably backed a bill passed in July 2020 permitting the establishment of multiple bar associations in Turkish cities, which opponents said would weaken some of the few remaining institutions still critical of government policies following a broad crackdown on dissident groups sparked by a 2016 coup attempt in Turkey.

The bill proved highly divisive among lawyers and citizens. Among its leading critics was then-Ankara Bar Association Chair Erinc Sagkan, who Sunday won elections to lead the TBB in a potentially pivotal vote expected to bolster rule of law and the independence of the nation’s lawyers.

“It’s comforting to see that the legal profession, as such, decided to stand for its own values, the values of independence regardless of all political struggles,” Massimo Frigo, senior legal advisor for the Europe and Central Asia program at the International Commission of Jurists, told Al-Monitor. “I think this is going to really give strength to the rule of law in Turkey.”

Framing his election as a vote for change, Sagkan accepted the TBB presidency Sunday, highlighting trends of increasing human rights violations in Turkey as well as failures to implement decisions by the Constitutional Court, as well as the European Court of Human Rights (ECHR).

"It has ceased to be just a TBB election,” Sagkan said. “We have come to the end of a vision that we believe did not make enough efforts to establish the rule of law.”

Sagkan collected the votes of 181 delegates, from a total of 348, at the TBB’s 36th ordinary general assembly held on Dec. 4-5, which had been postponed multiple times due to the coronavirus pandemic. The incumbent Feyzioglu received 156 votes.

Following the vote, main opposition Republican People’s Party Chair Kemal Kilicdaroglu congratulated the new TBB head in a tweet, saying, “The days when we will establish the rule of law together and you will fulfill your duty without pressure in our country are near!”

Sagkan’s election win comes after the multiple bar associations bill was passed by a ruling AKP and nationalist coalition majority in the Turkish parliament. The bill’s proponents argued it would create a more democratic and pluralistic bar association system in Turkey, while opponents saw the law as a way to silence lawyers critical of state policies or legal procedures.

Before its passing, 78 of 80 bar associations in Turkey signed a statement opposing the bill. Some bar association chairs also said the bill would alter district voting mechanisms, making it easier for more government-friendly candidates to lead local bar associations.

In July 2020, when lawyers marching against the bill were briefly stopped and encircled by police in Ankara, then-TBB head Feyzioglu visited the site. The protesting lawyers turned their backs to Feyzioglu in apparent disapproval of his leadership.

“Feyzioglu left those who voted for him eight years ago,” Kerem Altiparmak, member of the Ankara Bar Association, told Al-Monitor. “When he came to the position, he was seen to be in opposition to the government, but then he saw the politics in Turkey were changing so he chose to stand with [Turkish President Recep Tayyip] Erdogan and his government.”

Altiparmak said the multiple bar associations bill was in part designed to boost Feyzioglu’s re-election chances, but the attempt failed with Sunday’s vote. Yet the bill has not gone without consequence, as new bar associations were established in Ankara and Istanbul since its passing.

With Sagkan now leading the TBB, Altiparmak said the union might more closely monitor cases, report on legal amendments relating to lawyers and the judiciary, as well as work more regularly with international institutions — in contrast to his predecessor, who reportedly limited such activities.

“[Feyzioglu] dismantled the environmental law group working in the bar association’s union,” Altiparmak said. “Now it might be created again and might do more reporting on corruption and environmental damage caused by the construction sector, for example.”

Feyzioglu often described such monitoring to be supportive of “imperialists” or foreign actors working to undermine Turkey. He also rarely commented on the non-implementation of ECHR judgments for the cases of jailed philanthropist Osman Kavala and former Peoples’ Democratic Party Co-Chair Selahattin Demirtas.

Altiparmak said the new TBB head could reverse such practices, citing past collaborations with Sagkan in which he took on “very serious human rights reporting, which he knew could have threatened his position as the chair, but he tolerated the risk.”

“He definitely can’t be worse than Feyzioglu, but we have to see how good it will be because I’m sure the government has its own plans … to prevent the new union to work actively,” Altiparmak told Al-Monitor.