The arrest of a well-known Turkish lawyer has fueled concerns that judicial authorities are trying to disable the defense in politically charged cases by criminalizing attorneys. 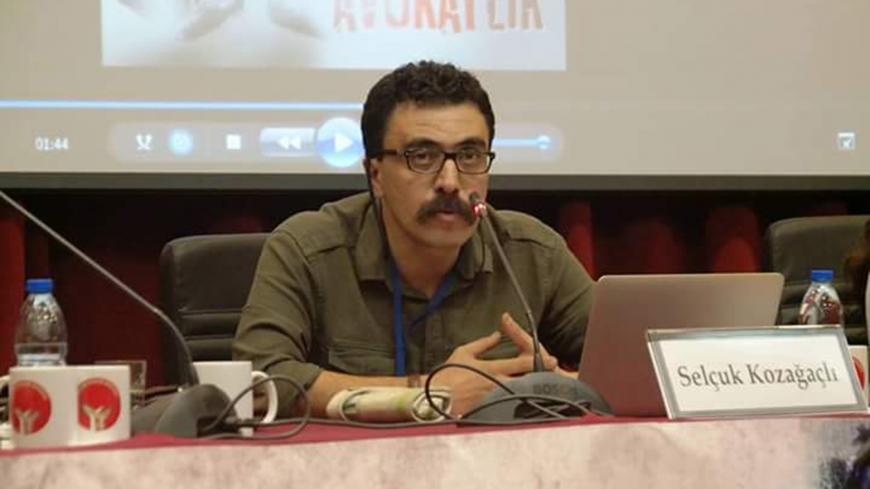 In mid-November, the emblematic hunger strike of Turkish teachers Nuriye Gulmen and Semih Ozakca passed the 250-day mark. Gulmen, a literature professor, and Ozakca, a primary school teacher, lost their jobs in the massive purges that followed the failed coup attempt in July 2016. Their protest to get their jobs back began as a sit-in in downtown Ankara a year ago and then turned into a hunger strike, landing them behind bars in May on terrorism-related charges. Since then, Gulmen has been transferred to hospital detention, while Ozakca has been placed under house arrest.

The pair’s saga also has sucked in their lawyers. On Nov. 13, Selcuk Kozagacli became their 18th attorney to land behind bars.

Kozagacli — who used to chair the Progressive Lawyers Association, one of the many civic groups Ankara has shut down since the putsch — is a well-known lawyer whose legal battles have covered a wide range of human rights issues, from torture and maltreatment to the 2014 mine disaster in which 301 workers perished. He was jailed pending trial on charges of belonging to an outlawed organization, based on incriminating testimony by a secret witness.

According to his lawyer Serhat Cakmak — who is also the spokesman of the Libertarian Lawyers Platform — the evidence used to incarcerate Kozagacli is unlawful. “The purpose of his arrest is to suppress dissidence in society,” Cakmak told Al-Monitor.

Stressing that Kozagacli had taken part in many politically charged cases as a lawyer, Cakmak said, “He was put on trial many times, and every time he was acquitted.” Judging by the information provided by Cakmak, Kozagacli is now being linked to the case of the two hunger strikers he represents; they stand accused of membership in the Revolutionary People’s Liberation Party/Front, a far-left group that Ankara considers a terrorist organization.

Kozagacli is not alone. Lawyers Sezin Ucar and Ozlem Gumustas landed in jail on charges of links to an outlawed organization after attending the funerals of clients. Lawyers Ebru Timtik and Oya Aslan met the same fate after their names appeared on papers found in the pockets of slain militants.

According to Meral Danis Bestas, a parliamentarian belonging to the pro-Kurdish Peoples’ Democratic Party and a lawyer by profession, attorneys are being criminalized over the cases they take. “A lawyer who defends a rapist is not a rapist, and a lawyer who defends a murderer is not a murderer. Lawyers represent the defense and are obliged to defend the rights of their clients,” Bestas told Al-Monitor. “The lawyers of Nuriye Gulmen and Semih Ozakca cannot be legally associated with [the case of their clients],” she added.

For Bestas, Feyzioglu has taken an “unacceptable” stance. “The head of the Turkish Bar Association takes interest in anything but the attacks on the rights of lawyers. He is failing his duty,” she said. “This is unacceptable. The Turkish Bar Association is supposed to defend the right to defense, regardless of what political convictions lawyers have and what cases they take.”

The Libertarian Lawyers Platform plans to launch a campaign for Feyzioglu’s resignation. According to Cakmak, “Feyzioglu is trying to say that the lawyers in question have nothing to do with the profession of defense, that they are involved in criminal activities and that’s why [the bar association] will not stand up for them. This is a very absurd argument with no legal basis. We are demanding Feyzioglu’s resignation.”

In a recent speech in parliament, Bestas said the total number of lawyers arrested for alleged membership in outlawed groups was believed to have exceeded 500 and urged the Justice Ministry to reveal the precise figure. The ministry has yet to respond. Bestas said the majority of incarcerated lawyers face charges of belonging to the Fethullah Gulen Terrorist Organization — the term now used for Gulen’s followers, who stand accused of perpetrating the botched coup attempt.

Judging by Bestas’ estimates, many of those arrested appear to be lawyers who have been involved in terror-related cases. That lawyers defending suspects accused of membership in terrorist groups are themselves put on trial for belonging to terrorist groups is a reason for serious alarm over the right to a fair trial — not to mention that Turkey’s judiciary is already under fire for having become largely politicized. As opposition quarters are being terrorized via a politicized judicial system, coupled with widespread media pressure, the defense itself is becoming defenseless. More should be revealed in the coming days as more political cases hit the courts.